Not such a thing…

…as a “difficult second album” from Best Girl Athlete. Read our review here.

Time to go to the Carnival

The all new and shiny festival, Carnival 56 is coming to Dundee – 3 days to go and counting. That being so, we thought we’d put together a wee list for your listening pleasure, and to get you in the festival mood.

Tickets are still available, so if you find yourselves at a loose end this weekend, why not come on down to Carnival 56.

This year’s True North music festival will pay homage to one of the most influential rock bands of the 70s – Fleetwood Mac.

The festival, which runs from September 7-10, will also feature performances from cult bands Arab Strap and Public Service Broadcasting.

Singer-songwriter Kathryn Joseph will perform a joint headliner with Scott Hutchison of Frightened Rabbit, while Dutch Uncles, Pictish Trail and Wild Beasts are also on the bill. Headline events will take place at His Majesty’s Theatre, The Lemon Tree and Tivoli Theatre, with further fringe events and support acts to be announced in the coming months.

APA chief executive Jane Spiers said: “Following the unprecedented success of our Celebration of Kate Bush at last year’s True North, I’m excited to announce that we will once again be doffing our hat to one of the most iconic music acts of our time. Our Rumours event will celebrate Fleetwood Mac’s ground-breaking album of that name. 2017 marks 40 years since the release of Rumours and True North will celebrate the band’s masterpiece in full over the course of an inspiring and authentic evening of music which promises to be one of the most defining moments of this year’s festival.”

Rumours will be curated by the hugely gifted Start to End, who specialise in bringing acclaimed albums to the stage. The band will gather together some of the country’s best singers and musicians for the concert on Saturday, September 9 at HMT, which will culminate in a greatest hits set.

True North’s opening concert will come from the enigmatic and inimitable Public Service Broadcasting, who will bring their stunning audio-visual show to HMT on Thursday, September 7.

The Lemon Tree Late line-up will see art-rock group Wild Beasts take to the stage on Thursday night, while Friday night’s Lemon Tree Late will come from art-pop quartet Dutch Uncles. Pictish Trail will bring his unique and hypnotic folk/electro act to the Lemon Tree for the True North After Party on Saturday after Rumours, with guest DJs on hand to get the crowd going.

Ms Spiers added: “Sunday evening’s joint headliner is another highlight – Scott Hutchison and Kathryn Joseph are such charismatic performers and their event will be a stunning showcase of their individual talent. Arab Strap last played Aberdeen over a decade ago, so this is a brilliant chance to see them in the intimate setting of the Tivoli Theatre. The band sold out the Barrowlands last year and I’m sure fans will be quick to snap up tickets this time round. Public Service Broadcasting play with us at True North just before heading off on a major city tour in North America and HMT promises to be the perfect venue for their mesmerising audio-visual extravaganza.”

Tickets for True North are on sale to APA Friends next Wednesday (June 21) and to general bookers on Friday (June 23). Tickets range from £11 to £22 and multi-buy discounts are available. They can be bought online at aberdeenperformingarts.com, in person at the Box Office at HMT or The Lemon Tree, or by phone on (01224) 641122.

A Fringe line-up and support acts for the festival will be announced in the coming weeks, to include a production masterclass and intimate music sessions at the Maritime Museum among other events.

Now and again we see an artist perform and think, now that’s someone I’d like a word or two with. Chris T-T was one of them and he’s back in Aberdeen on Friday night at The Lemon Tree. Still Burning managed to share some words with the main man before the event.

Back To The Electric Fields

Another festival announcement, this time it’s an old favourite though. Great location and the line-up is looking quite tasty. The final tickets go on sale tomorrow, so be ready and good luck!

Summer music festivals in the NE have had a boost this year, with a new 2-dayer kicking off in Dundee.  Find out why you need to be ready and waiting tomorrow morning, 9am sharp, here. 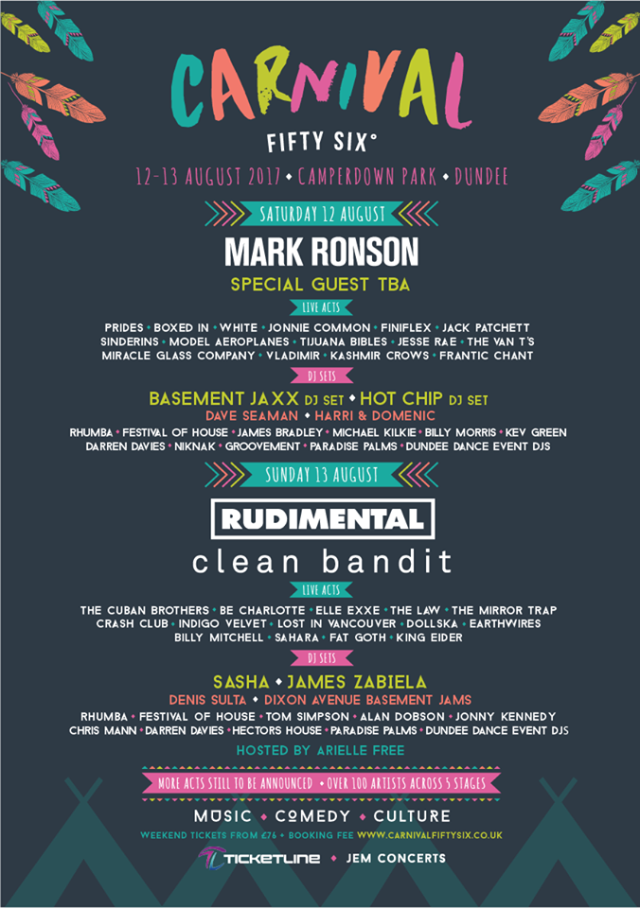 And so we come t0 Day 24 – Christmas Eve – and what better choice for Xmas than The Xcerts. Originally from Aberdeen, they’re now based much further south in the UK but they make a point of being back in Aberdeen around New Year. They’ll be playing a free (first come first served) acoustic set in Bridge Street Social on the 30th December.

Have a Fantastic Christmas and a Very Merry New Year from all at Flares n Seagulls. We’ll see you in 2017.

This is the complete There Is Only You album on Youtube.

If you’ve never come across our yellow-clad Day 23 pick, then you really need to remedy this. Colonel Mustard & the Dijon 5 are probably one of the best festival bands you’ll come across.