“If there was one thing that Josh Franceschi wanted the audience to take away with them from Monday nights’ electric gig, it was this simple message:
Rock is not dead. And even if the genre was dead and buried, the band certainly convinced the sold-out crowd that his band, You Me At Six, would be the ones to revive it.

Despite shocking amounts of people still giving me blank stares when I mention the name You Me At Six to them, it‘s fair to say that the band has exploded in the past couple of years. Debuting at number three with their new album “Sinners Never Sleep”, sitting at 97,000 twitter followers, and in the midst of a heavy touring schedule, it looks as though they have no intentions on burning out just yet.

Half an hour before the doors had even opened, there was already a huge line of dedicated fans waiting rather patiently to get in and see their favourite band perform in Aberdeen once more. One girl told me that she started queuing at 2 o’clock in the afternoon to get to the front, that‘s five and a half hours of waiting outside in the cold, just in order to secure a position in the front row. Shortly after, I spotted another fan sporting a monkey suit…
Whether it was down to sheer dedication or unrivalled eccentricity, you could be sure that this would be no ordinary night. 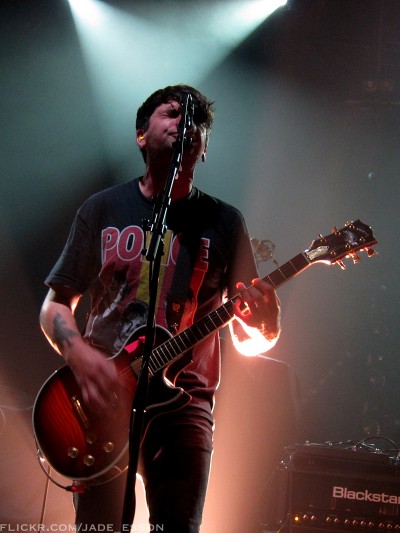 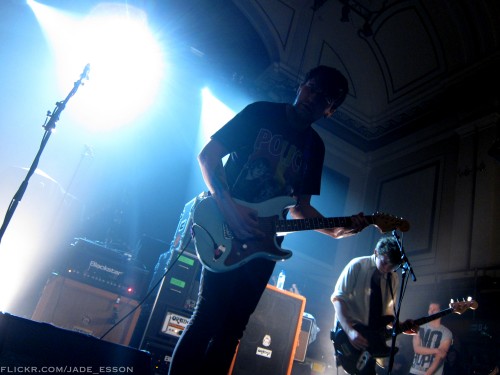 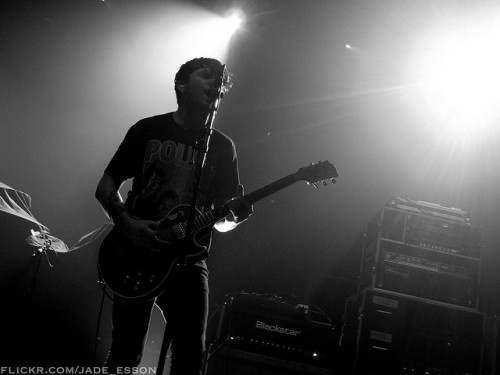 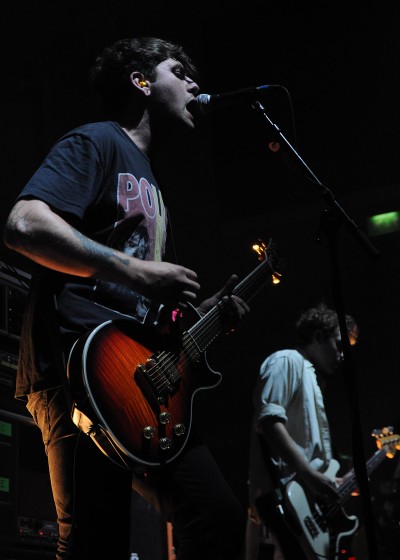 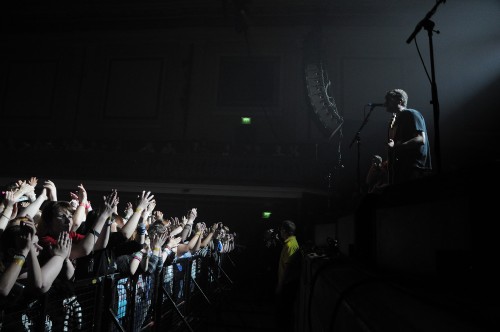 When we were finally ushered into the venue, rockers Lower Than Atlantis had already began to play their nine song set. With epileptic fit inducing lights and a sound that rips straight through you, Lower Than Atlantis dazzled the audience for various reasons. The band appeared to have good chemistry together onstage and their cover of “The Pretender” did the Foo Fighters proud. Thoughtful lyrics and a heavy instrumental is what the band are renowned for, or at least, will be after this tour has given them the exposure that they deserve.
Bassist Dec Hart was noticeably exuberant during their performance and looked as though he was truly enjoying himself, which is always lovely to see when you go to a show as you, as an audience member, feel as though you are doing something right. However, with all that being said, they would have benefited from moving around a bit more. Everyone had their allocated position on stage and that was that, there wasn’t much in terms of movement other than stepping backwards and forwards or taking a swig of water.  Hopefully, as the tour progresses, the band members will gain confidence and start moving around more.

The would-be-screamo band Deaf Havana were up next, acting as the second (and final) support band of the night. From the reception they received, it was clear that the audience had massive respect for both the band and their music, and if judging on crowd reaction alone, you would have been mistaken for believing that they were the headliners themselves. As soon as they began playing, you could tell that these boys weren’t just “another support band”. Their music seemed to captivate the audience in its entirety. It became impossible not to sway, mosh or head-bang to their music. Despite some Deaf Havana fans still mourning over screamer Ryan Mellor’s departure, I feel as though the lack of screaming allows the band to appeal to a wider audience than it would have originally. And they deserve all the fans that they can get, because they are, without a doubt, extraordinarily talented and their music deserves to be shared with as many different people as possible.

They played a good mix of their old and new songs, some the audience sang along with James Veck-Gilodi to, others they just applauded and cheered at, but every one was clearly enjoying themselves throughout their short set. They played their memorable new song “I Will Try”, asking for audience participation to help them sing the melodies “Woah Oh Oh Oh”, which the friendly crowd were happy to help with.  Deaf Havana ended their time on stage with a bang with their most popular song, “Nicotine and alcohol saved my life”. I swear, there’s nothing better than a group of music fans joining forces to scream someone’s lyrics back in there face.

James was everything that you could ever wish for in a front-man, he had enthusiasm, energy, sheer talent and oozed coolness from every single pore on his body. Drummer Tom Ogden was one of the happiest, energetic drummers I have had the pleasure of seeing perform. The women in the audience drooled over his charm whilst the men drooled over his effortless drumming skills. The only member that I was slightly disappointed with was guitarist Chris Pennells, who actually managed to look bored for a majority of the set. Perhaps he was nervous? Perhaps he was slightly intimidated by the masses of fans shouting “Here, here, here we fucking go”? We’ll never know. Let’s just hope that this was a one off, because other than his body-language, I couldn’t fault the band at all. 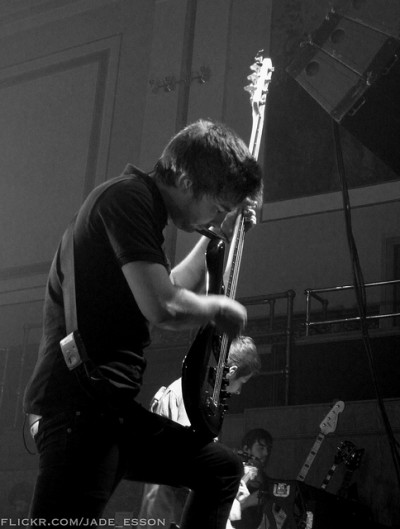 After what seemed like an eternity, You Me At Six finally erupted onto the stage to a spectacular reaction from the excitable crowd. Illuminated by crazed lights and hundreds of camera flashes, the five piece looked every bit like poster boys for the evolution of British Rock. As the band opened with hit “The Consequence”, the audience came to life immediately. If I thought the reaction to support Deaf Havana was exceptional, than I had certainly seen nothing yet. By the time the bridge of the song blared out from the venue’s massive speakers, the world had disappeared beneath a forest of raised arms, obstructing everything from sight other than the blinding lights that bathed the entire venue in a harsh, orange light. Despite being blinded and deafened, the audience were ready for the night of their lives.

By the time the 6th song, Trophy Eyes was being played, Josh had already encouraged us foul-mouthed Scots into chanting “Here we fucking go” for the third or fourth time of the night. We would have done it with or without encouragement, I’m sure of that if nothing else! It’s the chant that defines us Scottish crowds, it almost invokes something primitive within us, something that pushes us that little bit further, transforming us from being a good crowd into being the best. 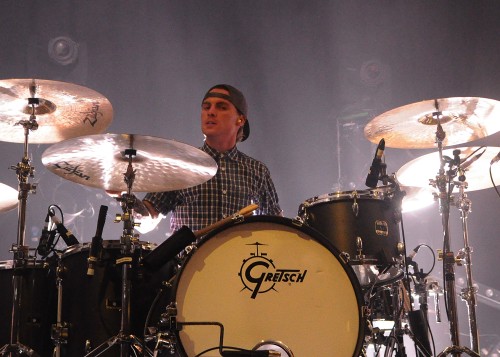 Taking a quick rest-bite to inform the audience about an article that he disagreed with regarding the possible death of rock music, Josh passionately defended his bands genre of music, with fierce support from the crowd, booing at the mere suggestion that rock was dead. Directly after he finished stating his views on the article, the heavy intro to new song “Bite My Tongue” squealed from the instruments on stage, before Josh displayed his ability to scream in the bridge. A few of the audience members muttered inaudibly in awe as they watched Josh step up to the plate and fill in for the studio version’s guest star, Oli Sykes. 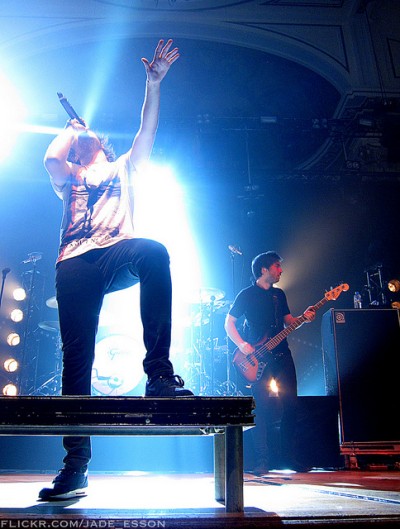 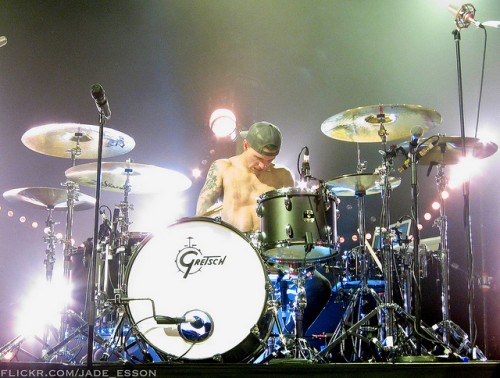 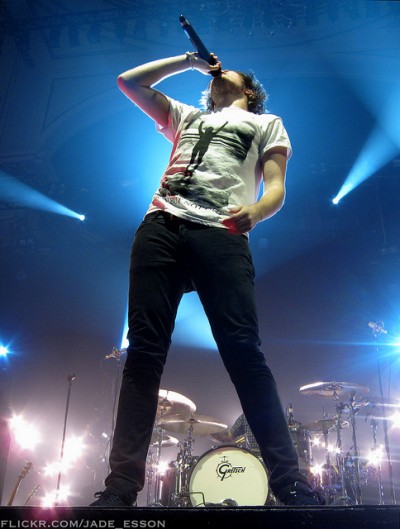 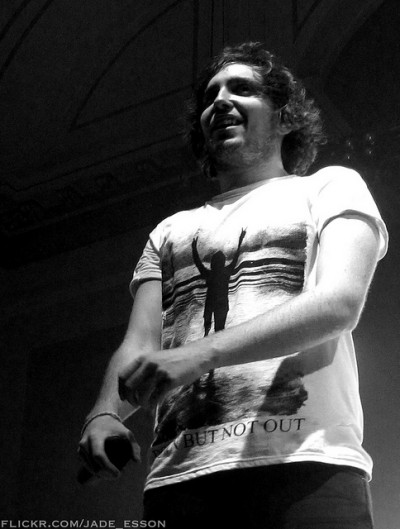 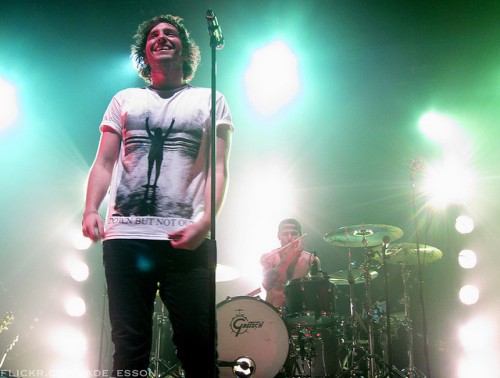 The set-list had a great mix of heavy, angst-ridden hits and slower, more melodic songs that put a bigger focus on Josh’s thought-provoking lyrics. If only fan favourites “Crash” and “Reckless” were played, it would have been perfect.

And as for the band’s performances? They were flawless. Guitarists Chris and Max appeared to be really enjoying the show, despite Chris’ facial expression being a mystery to the audience ninety percent of the time due to his insanely long hair. Anytime that I could see Max, he seemed to be grinning widely, or spurring the audience on, trying to make them as rowdy as he possibly could. Bassist Matt was energetic on stage, and seemed to have his movements perfectly synchronised with band-mate Max for the majority of the time, whether it was head-bangs or poses, you’d have been forgiven for thinking they were twins. Drummer Dan looked cool from start to finish, whether it was during performances or downing his beer in one, sophisticated swig, it was impossible not to respect this man’s musical talent or appreciate his mellow personality. Despite some fans not being able to appreciate Josh for anything other than his looks, it’s safe to say that he is not only a talented singer, but a fantastic lyricist. Powerful lyrics have become a prominent feature in each of the bands three studio albums that they have released thus far, with “Sinners Never Sleep” showing the most depth, growth and maturity yet. Josh knew how to win over the crowd, his smile ever-present, a smile which he transferred onto the faces of every single member of the audience at the end of the night as he exuberantly exclaimed:
“Aberdeen, this has quite simply been the best night of this tour thus far.”

As the audience made their way home from the gig that night, we didn’t care about the condition of our old friend rock music, because even if it had died that night, we knew that it died with a smile on it’s face.”