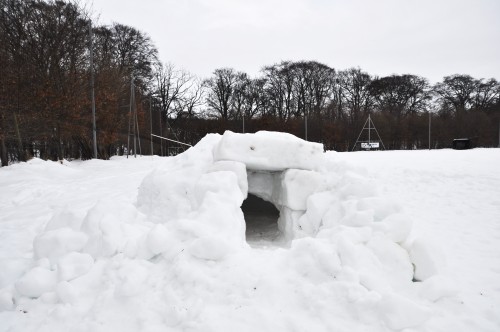 So, another snowy night, another gig.  At the moment it feels like I’ll be forever forcing myself out to gigs in the snow, please please go away snow!  Lemon Tree tonight for the Xcerts homecoming Christmas gig.

First support act was meant to be Sucioperro but because of the damn snow they couldn’t make it.  Luckily, Steven Milne was able to stand in, and I’m glad he did.  Having seen Steven as part of the Little Kicks many times, I’ve never seen him solo or heard any of his solo material.  I guess I was expecting a similar kind of sound to that of the Little Kicks, but found it mellower, more laid back and gentle sounding.  I love love love Steven’s voice, I don’t know why, but I could listen to him all day and all night.  So, playing a five song set, two songs with Patrick Shearer of Right Hand Left, Steven entertains what little crowd there is gathered at the Lemon Tree already.

Second on the bill are Right Hand Left, an Aberdeen band who I have been meaning to check out for a while, but as they play very few gigs, have yet had the chance too.  The Lemon Tree is filling up a little, but is still nowhere near being full as they start their set of eight songs.  The sound is heavier than I expected, not too heavy though, and I still enjoyed it.  It really is amazing seeing so many people at a gig wearing their wellies, and lead singer Bob makes a quip about it.

A few more people and the venue is starting to look full, especially down the front near the stage.  I must say, The Xcerts entrance is probably my favourite part of the night, as I am a wee bit of a fan of Christmas music (aye just a wee bit!) and the band entered the stage to SONG.  Loving it, and a little reminder that its Christmas is less than a week!  I forget the band look like half of the Inbetweeners, but am slightly disappointed that bassist Jordan Smith wasn’t wearing his glasses, making him appear much less like Will from the show.  Like last time I saw the band, they start with a bang and I jump a little, forgetting how heavy they are, but the sound in the Lemon Tree is far better than that in Snafu back in October, although it’s still as hot and sweaty!  After a tour of many dates, lead singer Murray is losing his voice, a disadvantage of being a singer and touring in the winter I guess, but it’s ok, because the Aberdeen crowd are more than willing to help him out with the lyrics.  I love that about Xcerts fans, I’ve only seen the band twice, but on each occasion, Murray could easily just sit out and let the crowd sing for him, that’s a pretty amazing thing for any band.  There is clearly a bit following of Aberdonians who adore the Xcerts, and who hang on their every chord and word.  I would also say there were a lot of people at the gig purely to say they had been, almost like a stamp on the “gig passport” – people like the group of four girls who came in halfway through the Xcerts set, checked their faux fur coats into the cloakroom and stood beside us with their drinks, chatting amongst themselves and greeting similarly fashioned people on the way past.  I just got the impression these girls weren’t there for the music, they turned up late and talked throughout, what’s the point in going to a gig to have a chat?  This leads me to believe they were there just to be seen, which I think may be the case with more and more gigs happening in Aberdeen, shame really, kinda distracting for us who are there to appreciate the music.

My favourite Xcerts song, Aberdeen 1987 was played as part of the encore.   Both times I’ve seen the Xcerts live, the crowd join in with the chorus, and it really is an overwhelming sound.  I think the lyrics work really well in an Aberdonian accent, especially whilst being yelled out by a load of drunk guys, typical of Aberdeen!  I think Murray got a little emotional at this point, but then, who wouldn’t.  I always think it must be amazing as a musician to hear a horde of folk singing words you have written.  Quality.

Songs were played from the first album, songs were played from the newest album, and the whole time the crowd were singing along.  Although I don’t get the hype which surrounds the Xcerts, to me, they are an Aberdeen band who got lucky, there are clearly many fans who adore them, and that is admirable.  In all honesty though, I would probably go to see them again just to hear the crowd singing along to Aberdeen 1987, amazing.    JoJo.

Apologies for the lack of pics, a personal situation meant that I just couldn’t make it along on the night. Still Burning.

1 Response to The Xcerts December 2010