It’s another Thursday night gig and a wee trip back in time for B as he goes along to the Music Hall to see The Waterboys.

The Music hall was nearly full, not quite but nearly. The stage was sparse with only some equipment and a white backdrop. It was clearly all about the music and performance.

The Waterboys took to the stage, looking splendid and every inch the musicians they are. Mike Scott, the voice of the band was instantly recognisable. His voice as fresh as the first time I ever heard them courtesy of some very close friends of mine. Looking part Mick Jagger part Steven Tyler and part Tam Balloch (an unfair comparison as you’ve more than likely not met him, you should. If you have, you’ll know what I mean.).

Slightly dodgy sound at the start but immediately sorted out. Immediately after the first song I heard shouts for “Whole of the Moon”. What a blessing and a curse to have a song so huge that it has allowed you to do what you do for a long time but have to constantly put up with folk shouting for it. The request was ignored. 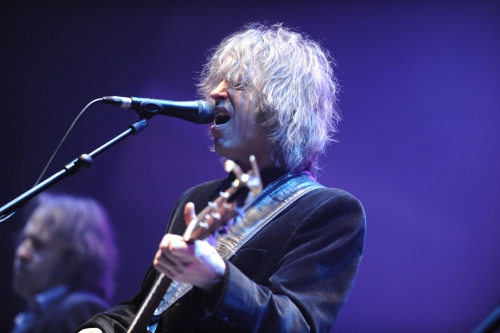 Mike intimated after the second song in the set that the evening was split in to
“Vintage Waterboys followed by a break then the second section from their new album, An appointment with Mr Yeats”. At this point there was a slight ripple of applause and it was clear not that many of the audience had heard it.

There was an odd atmosphere in the Music Hall. Almost slightly restless. Between songs and after applause there was near silence. I had a guess that most of the audience were just there and waiting for the “Big Tunes” but I couldn’t be sure.

The band appeared to be searching for an intimacy between themselves and audience. In my opinion, this wasn’t quite happening. The sixth song in the set was closest to their goal with Mike Scott on acoustic and piano accompaniment. There was a lot of crowd movement with folks nipping off to the toilet it just added to the disjointed atmosphere I was picking up. So the first section was finished and a 25 min break was announced. This reviewer’s opinion… to steal a phrase that seems to be popular just now…..Meeeeh!

No overheard chat during the break about the show or what was played, just folks filling to the bar etc. Again I had the prevailing feeling folk were waiting politely. I got the feeling that The Waterboys were playing their favourite tunes in this part of the show. The musicianship was unquestionable; a real professional outfit with skip loads of experience and talent. At one point in my notes I wondered if the band felt as uncomfortable as some of the crowd did. If they did there wasn’t a glimpse of it.

So to the second half. The lights became a part of the show. The demeanour became theatrical. Mike came out and began to pay his respects and admiration of W.B. Yeats, the Irish poet. The start of the second half took everyone by surprise. Short sharp lines from poetry accented by organ jabs and lighting to match it. I honestly don’t think the audience knew what to make of it? Some chuckled, some spoke in whispers to their neighbour, other just looked at each other. I wrote in my notes…”Is Aberdeen ready for this sort of thing?” although what the “thing” actually was I wasn’t sure myself.
I caught Mike Scott on breakfast TV one morning last week being interviewed about the album, An Appointment with Mr Yeats, and the show.
Even here, there was little chat about the work apart from the fact Mike himself had been taken as an 11 year old to a W.B. Yeats summer school by his Mum. And in the background “Whole of the Moon was playing” the interviewer actually stopped Scott and asked if the track could be “turned up”. As I said above, blessing and curse. In summation Mike said that apart from anything else it was still just a “Rock n Roll show”.

This was clearly something Mike had wanted to do, and I’m guessing has been doing, all his life. This was the fruition of it. The show went on and began to connect with folk. The tunes came across well and with commitment and passion. The show began to have an energy and momentum of its own that seemed to be missing earlier. The fiddle player appeared with a mask on for the tune “As Mad as the Mist and Snow”. It struck me that we were entering Prog Rock territory but it worked and was played so well. Fiddle and Organ joined in a “cutting heads” battle for the wildest and most wicked sounds added to the theatre of the show. Mike appeared with a genuinely disturbing mask of three faces with his own being in the middle. He began to recite to us from a large book. As said, surprisingly theatrical and proggy but we were all hooked in by this point. I’m sure many things have been written about Steve Wickham. So I will attempt to write something, which has not been committed to a review. Man he’s really fucking great on a fiddle.

The next song “Politics” was described by Scott as “Written a hundred years ago about corruption in the clergy, politicians and the super rich… could have been written 2 minutes ago”. We were all with him now. The set was great, made me want to go and find out more about Yeats, made me want to hear some of the songs again and go and buy them. Made me wish I’d known them better before I saw them live. Mike Scott, the driver of the vehicle that is The Waterboys had completed a live homage to “Irelands arch poet”. It was superb. Knowing what I knew prior to the show and what I’d just witnessed it was born of a genuine love of how one man had put words together. There wasn’t a sense of cashing in, at times it felt like we were in a brilliant lecture that certainly sparked an interest that I wouldn’t have had before. Job done. The show was part self indulgence, part evangelical, part testimonial, surprising, interesting but mostly genuine. I liked it.

The crowd enjoyed it too. It took a while but they accepted the show and embraced it but, there was no way the band were getting away with it. They knew what they wanted and weren’t about to leave until they got it.
What a wonderful position for a band to be in. Having played some very original material, which, defined their sound. To move on to a brand new body of work to support a new album and win over an audience to then have a crowd chanting for what they know the audience will guzzle enthusiastically. It wasn’t until this point that I realised how clever the set was.

The intro to “Bang the drum” started. The energy of the place immediately rose. People stood up! The cold tiny light of phones appeared and the aisles filled with people dancing. It took a long time but they got what they wanted. It was a stunningly played tune. Don’t mind me saying it gave me goosebumps. Can’t be bad eh? Mike went to his piano… he fumbled a few comedy lines on the ivories, he tried again and then he said “Sorry, third time lucky”.
“The Whole of the Moon started”. Folk went nuts. It was almost as if Mike was apologising for writing it. No reason to really. It’s a cracking tune.

The band finished again to huge applause. A lot of folk left. A lot of folk didn’t and Mike and the fiddle player, Steve Wickham, came back out. This appeared impromptu and unplanned. I could be wrong.  “We should play something really weird to Fuck them up” At last the intimacy and connection I craved from a band of this calibre. They did, it sounded a bit like “The Mucking of Geordies Byre”. The rest of the band started to dance about behind them joining in with them one by one. It was great. Then the unmistakable “Fisherman’s Blues” fired up to complete a comprehensive musical journey.
Looking at my notes at this point I began to write a lot of questions. I’d love to speak to the band about this set. There was so much to think about its taken me three days or so to commit my opinion to the page. I’d love some discussion here with the band and some others who were at the gig who have a greater knowledge of the band than me. Get their thoughts and opinions on the show?

It has taken a while to percolate in my brain, but I really enjoyed the show. Not at all times by any means but as a complete show it was fantastic.

Go and see them and wait till the very end. It was worth the investment of time. Oh and Mike? Sorry but you are wrong. I think it was far more than just a “Rock n Roll show”.

Thanks for reading.
B 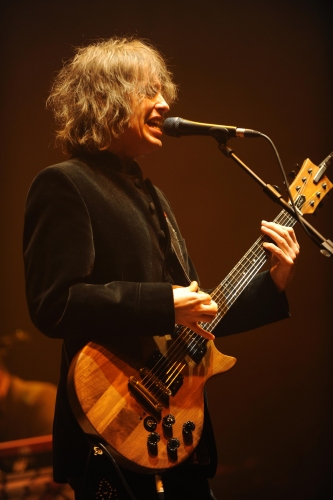