The last time I’d seen The Strangers was at the old Capitol theatre in Union Street back in 1990. That gig was a dull and lifeless affair, with the then five-piece band clearly going through the motions as they miserably trotted out unnecessary cover versions and filler-quality originals. Original singer/guitarist Hugh Cornwell unsurprisingly quit the band at the end of that tour.

What followed was a ten year, four album dalliance (as I’ll call it) with former Vibrator John Ellis on guitar and Paul Roberts on vocals. I never really took to his bare-chested Iggy-esque interpretation of the Stranglers’ classic songs – taking over  both Cornwell’s and JJ Burnel’s vocal lines – and the new material they were writing was largely uninspired. However, around the early noughties a murmur started to grow about a change for the better. Ellis had been replaced by (former Toy Doll!) Baz Warne who had, by all accounts, brought a slew of decent new material with him and had seemingly injected new life into the band. A new album, Norfolk Coast, was unveiled making the resurgence official, being hailed in all quarters as a real return to form .

Roll forward another couple of years and Roberts leaves the band “by mutual consent”. Back to the classic four piece line up with Warne taking over the Cornwell vocals and JJ returning to his own, it seemed that the Stranglers special dynamic was restored. The latest album Suite XV1 released in 2007 backed this up completely. In my opinion, it’s the best thing they’ve done since The Raven. The songs display a wide range of musical styles and lyrical themes and yet are all indelibly stamped with The Stranglers identity. It was my album of the year by some way when it was released and I’ve played it more than any other Stranglers album in the years since.
And so, with tonight being my first opportunity to catch the band locally in their current form, was I looking forward to it? Er…just a bit.

The Forum is a great wee venue. Good size, with the stage at one end, bar at the other, and only a couple of pillars providing viewing restrictions. However, access to the hall is dreadful. According to the tickets, doors were at 7 but when we swung past at around 7.30 there was a sizeable queue waiting to get in. A swift pint in the nearby Noose and Monkey later and we return to find the queue is still there at 8.10. As we waited to get in, I heard the rumblings of the support band starting up their set. When we eventually got inside the venue, I found there was a queue for the Gents and then, when I’d been, a queue to get into the main hall. Somehow I wormed my way through the densely packed crowd to the far side of the hall where there was actually space available in which to stand in reasonable comfort!

The band on stage going though their paces is called Max Raptor. They’re the tour support but I must confess I’d never heard of them before today. They’re tight and energetic and their songs are full of punky / indie swagger, catchy choruses with lots of Woah-oh backing vocals. By the end of the second song two words are lodged in my mind. Kaiser Chiefs. It’s not a direct rip-off of course but they’re pretty damn close in both their styling and delivery. This is confirmed when I return to my mates when they’re done and Mike cites the KC influence in his view of them too. They’re a competent enough band though and the songs were good enough to get my feet tapping by the end of their set.

There’s a short break while the stage is cleared and I take the opportunity to battle my way to the lavvy and back again. They really seem to have shoehorned people in here tonight, at least Stage Right where the hall entrances are However, I manage to retrieve my spot just as a hairy-biker type takes to the stage with a piano-accordion. He kicks off a couple of bars of The Northern Lights Of Old Aberdeen and I groan inwardly. However, it’s just a tease as he then powers through a terrific version of Waltzinblack, with the assembled throng lending their voice to the refrain.

The Stranglers take their places on stage dressed in their trademark black shirts, with their iconic logo in huge white letters behind them. They take their places, Jet Black stage left at the back with JJ in front of him, Dave Greenfield stage right at the back with Baz in front. They’re all looking pretty happy, flashing grins to each other and to known faces in the front rows.

It’s a low key start to the set – Time To Die off of the first Roberts album. It’s a good song and gives Baz the opportunity to show off some of his skills on the guitar while JJ breaks his voice in gently with the spoken vocal. However, I don’t think it’s familiar to many here tonight and the response is quite muted. However, there’s hardly time for applause as the familiar intro to Go Buddy Go rings out sparking off some enthusiastic bouncing stage front. It sounds good, with almost as much vocal coming from the crowd as from JJ himself.

(Get A) Grip (On Yourself) is up next, giving us the first opportunity to see how Baz handles the Cornwell vocal lines. He does a remarkably good job of it, capturing the delivery perfectly without trying to ape Hugh’s voice completely. It’s a good start.

JJ takes over again for a claustrophobic sounding Curfew, one of only a handful of tracks tonight which wasn’t a single. The Norfolk Coast album soon gets an airing with JJ singing the title track quickly followed by Baz singing Long Black Veil. They both go down well with the crowd, although there’s a markedly louder cheer when they recognise the intro to Always The Sun. It’s played superbly and provides another opportunity for the crowd to join in on massed backing vocal for the chorus.

One big hit is immediately followed by another as they launch straight into Golden Brown, its gentle waltz timing affording the silver haired Jet Black a wee bit of respite. Despite his advancing years, he sounded great tonight and never put a foot wrong, thoroughly meriting the chants of Jet Black, Jet Black by the crowd.

The “classic” single is then followed by the new single. Retro Rockets is available to download now and on first hearing, it’s a decent Stranglers uptempo rocker. It definitely sounds like it’s worth checking out and gets a good audience response.

I get a thrill of excitement as Jet thumps out the bizarrely timed drum rolls that usher in Genetix, always a favourite of mine. However, (***Obligatory Moan TM***) something’s not right. Dave Greenfield’s synth is virtually inaudible and the song sounds messy and lost without it despite his best effort on lead vocal. Midway through, when they change to the outro section, it comes back and the ending sounds as powerful as it should. It’s a real shame though as it spoiled what for me could have been one of the highlights of the set. The same problem would arise later (on Walk On By and Down In The Sewer) so I dunno if it was just one specific keyboard that was malfunctioning or what. It should have been spotted and rectified though.

I was ever so slightly disappointed that we only got Unbroken off the last album. No Spectre Of Love – surely a Stranglers’ classic if ever there was one. But it’s a minor grumble. When you’ve got as long a line of hit singles as The Strangler’s, what are you gonna leave out? As well as those I’ve already mentioned, tonight we also got treated to Skin Deep, a hugely powerful Nuclear Device counterbalanced by a delicate Strange Little Girl. We got the hugely underrated Duchess, the fucked up reggae of Nice ‘n’ Sleazy and we got Baz putting his own mark on a menacing version of Peaches – “Aww shite! There goes the charabanc.” spat out in his broadest Sunderland accent. All though this, the band really seem as though they’re enjoying themselves, Baz hamming it up for the front rows, JJ and Jet sharing the occasional joke, Dave laughing with the stage hands as he dashes off an extensive keyboard run one-handed whilst draining his pint with the other. It’s great to see. 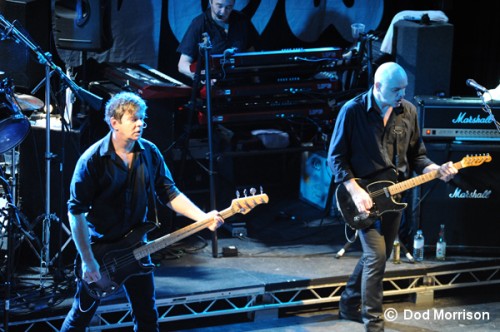 The main set ends with the classic Down In The Sewer, with Burnel crouched low doing his trademark crab dance of old as he stares out the front rows. Despite the keyboard problems, it’s still a powerhouse of a tune and a fitting closer to the set. We know there’s more to come though, some staples that haven’t yet been played and, sure enough, they return to the stage after a short break. They kick off the first encore with a pounding Five Minutes which sounds every bit as powerful as when it was recorded back in 1979. It’s quickly followed by a rousing Something Better Change with the crowd nearly drowning out the PA for the “Stick my fingers right up your nose.”  line.

We have another short break during which the crowd is even more vocal in their demands for the band to come back. Dave hits the organ chords that signal the start of Hanging Around and the crowd goes mad again. The soaring keyboard flourishes as they bridge to the chorus of the song make the hairs on the back of my neck rise. It’s simply stunning. Of course, there’s only one way to follow that.  A couple of bass notes echo from JJ’s Fender as he attempts to disguise what’s coming next. It’s not working though. The skittery wee run down the G-string, the short snare roll and then that instantly recognisable keyboard riff usher in No More Heroes. Baz’s vocals are perfect (as they have been all night). Just the right amount of a sneer, just the right amount of menace for one of the greatest anthems of the punk era. It’s completely timeless and surely now up there with the universal greats of rock music. It’s a perfect way to end the night. The applause as the band finally bids us goodnight is both long and loud.

I’m really pleased I went along to this. The band tonight is definitely much more energised than the one I saw twenty years previously. The new material is sounding great and they’re obviously having fun playing it. But, although you’d never know it from his playing, Jet Black is now 71 years old. He can’t keep doing this forever, and JJ has said he doubts if they’d carry on without him. It’s Jet’s band. Catch them while you can.     New York Johnny

5 Responses to The Stranglers February 2010