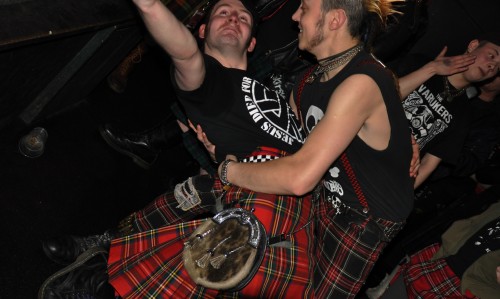 This was an uplanned and unexpectedly pleasant night out. Work commitments meant I had a few nights stuck in a hotel in town with nothing to do, so a couple of phone calls let me know that a few of my mates would be attending this Burns Night gig. I wasn’t overly familiar with the Real McKenzies beforehand and, although I thought the little I’d heard was OK, I probably wouldn’t have made the effort to travel to the gig. The idea of Canadians dressing like Braveheart extras and toting bagpipes whilst calling themselves the Real anythings, well….. However, judging by the myriad kilts and tartan bondage trousers crowding the Drummonds dancefloor tonight, it’s clear that very few others share my way of thinking. Ah well, on to the gig.

First up were Skizofrenik, a group of youngsters from Fraserburgh who play old school punk rock. They disappeared off the scene for a while last year and the time away seems to have done them good. They’re much tighter than before and there’s less fannying around between songs. Stage presence and delivery is better too, while the lead guitarist cracked off a couple of decent solos pretty effortlessly. However, their ratio of covers vs original material is still too high for me and they need to start working towards a full set of their own material if they’re gonna progress any further than the “dependable openers” slot they seem to have cornered the market in. A decent enough start to the evening though.

I ducked out for a quick pint up the road at this point but returned to a steadily filling Drummonds in time to catch the second half of Billy Liar’s set. The years propping up Drummonds punk bills have ensured a small but extremely partisan crowd appears stage front for his one man set. The voice and acoustic combination usually does not very much for me but the young Mr Liar always engages my attention. He writes clever and amusing words, couples them to ramshackle punky tunes and delivers them with a casual and infectious energy that somehow manages to transcend the limitations of the format and really gets your head nodding and your feet moving. Very enjoyable stuff.  Still like to hear him with a band behind him again though.

Just as the McKenzies aspire to be Scotsmen, Roughneck Riot appear to be chasing an Irish heritage. This was my first exposure to them and the immediate comparison in my mind was to The Pogues. Although the songs themselves are very different, they share the same boisterous, devil-may-care attitude that made the live Pogues experience such a joy to behold. The Roughnecks seem to have a decent armoury of tunes too which certainly grabbed (and kept) my attention and got the dancefloor almost full for the first time in the evening. If the original songs got people dancing, then their rabble-rousing covers of To Have And To Have Not and the set-closing I Fought The Law were a masterstroke, getting the crowd firmly on side and, in the case of the latter, on stage. By the end of the song it was hard to distinguish who was and who wasn’t in the band. They were the pick of the evening for me and I’ll certainly be checking them out further. 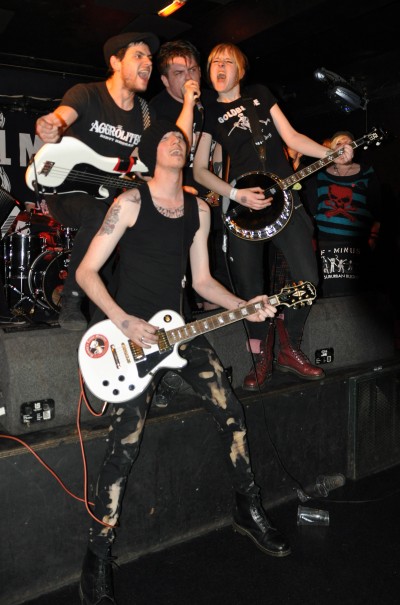 This of course gave the Real McKenzies a tough act to follow but they rose to the challenge admirably, thrashing out a staggering 30 song set!I have to say I think they work better in the live environment than on record. The sound is powerful yet clear, with the bagpipes meshing really well with the guitars and getting the adrenalin flowing. The mix of originals and revved-up traditional songs is almost seamless and the passion they put into their playing definitely gets you onside. So much so that you can almost forgive the little slip ups (like getting Aberdonian wrong!) and the over-egging of the Scottish accents (Glezzgeeey!!). So the heady mix of ballads of lost love sit next to the drunken drinking songs and the reels start birling on the dancefloor as everyone gets into the spirit of the night. Mid set there’s a faithful rendition of Wild Mountain Thyme that appeared to mean more to the band than to the by now drunken tartan-clad horde on the dancefloor but I thought it was pretty stunning anyway. And then they up the tempo and they’re off again. 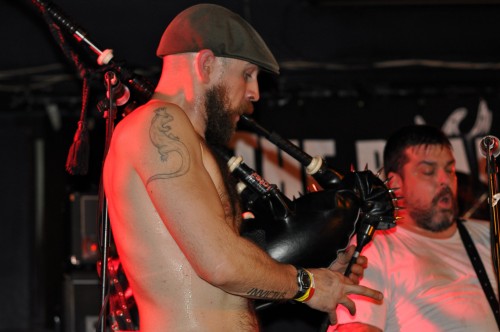 Had they stopped after 45 minutes or so, I’d have probably given the McKenzies a higher rating. However, they ended up playing 6 or 7 songs too many in my opinion. Although some of these were “big finishers” and crowd pleasers like Whisky Scotch Whisky or Thistle Boy, decent enough songs and well up to the standard of the earlier stuff, by this time I’d had enough and, by the end, I was glad when they finished. That’s just me though, as they got a great response from the crowd and inevitably left them smiling and sweaty. You can’t ask for more than that. 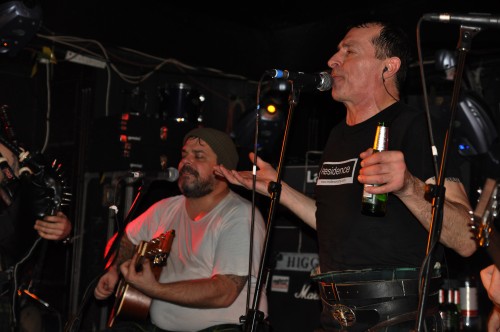 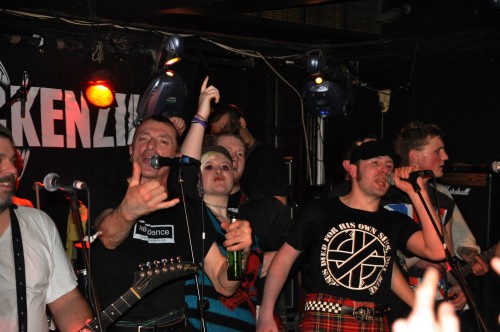 Overall, I shouldn’t grumble as I had a great night in good company. The music was good and we got four decent and varied acts for our six quid. Value for money or what? It was also encouraging to see Drummonds so reasonably busy on a school night when there had been little publicity (as far as I had seen anyway). And of course, most folks stayed right to the end. Good stuff.

Lang may the McKenzie lums reek.

The Real McKenzies on the web

1 Response to The Real McKenzies January 2011