Laura Mvula has had a pretty busy year. Fresh from her debut Glastonbury performance, the singer/songwriter from Birmingham has found breakthrough success in debut album Sing To The Moon, playing numerous festivals around the world, placing 4th in the BBC’s Sound of 2013 and being nominated for the BRIT Award’s Critics’ Choice prize. Pulling a sizeable Sunday crowd in the Transmission stage tent, the singer’s set is warmly received by those in attendance. Backed by a talented band comprised of drums, double bass, strings and harp, her sound was once described by Guardian journalist Paul Lester as ‘gospeldilia’ and that exactly sums it up. Her vocals are powerful, with her soulful, tribal influences merging together to help her form a unique sound. As expected, single Green Garden is met with the warmest response from the crowd, but it’s a cover of Bob Marley’s One Love that provides my personal highlight.

Next up for me were London based duo AlunaGeorge, consisting of you guessed it, Aluna on vocals and George on production. Like Laura Mvula, the electronic pair were also nominated for the BRIT’s Critics’ Choice award and have went from strength to strength, garnering rave reviews from the summer festival scene and achieving mainstream support from the likes of Radio 1 and Q magazine. Combining sounds from bass, garage and dubstep with Aluna’s sweet, almost sickly voice at times , the pair play a set full of pop hooks and synth-tastic basslines. The pair hardly interact with the crowd at all during the set, leading me to believe that they are bit too cool for school but when it comes to tracks such as Attracting Flies, Your Drums, Your Love, a brilliant cover of Montell Jordan’s This Is How We Do It and a rousing version of White Noise, they prove that they have got the substance to match the style.

Bringing latest album Beacon to the Sunday summer sun on the Main Stage was Northern Irish band Two Door Cinema Club. There’s a cocksureness about the band, led in bags by lead singer Alex Timble but when you pack out the biggest stage at T at 5pm with everyone singing your songs back, you can sort of see why. The set leans heavily on 2010’s Tourist History but its singles Sun and Sleep Alone from Beacon that are the stand outs for me. The only criticism I have is that a lot of the songs sound quite similar, no bad thing if you’re a diehard – if it ain’t broke, don’t fix it. It’s my only visit to the Main Stage over the entire weekend and it’s an enjoyable slice of summery indie-pop. The Bangor boys have done well.

Following Two Door was band of the moment, Scottish electro-pop trio Chvrches. The uber cool band, featuring Iain Cook of Aerogramme and Unwinding Hours fame on synths, have only been on the go for a year before playing T but have gathered so much pace and buzz that they are arguably the hottest band in Scotland at the moment. Fresh from their US TV debut on Late Night with Jimmy Fallon, the band brings its layered synth-pop to a packed Transmisson stage tent. The stage set up is simply, with both synth players flanking the petit-popstar of a lead singer, Lauren Mayberry. Latest single Gun is full of pop hooks and is catchy as hell, whilst the band also debut a number of singles that are to appear on debut album, The Bones Of What You Believe, which is released on September, 23 of this year. Stand out tracks are The Mother We Share and a rousing version of Recover that leave the crowd wanting more.

To be honest, I’m pretty late to the Chvrches boat, having seen their name bandied about the internet all year but never really taking the time to listen properly; until now. Chrvches are completely different to anything I’ve ever listened to before and the fact that they are from Scotland makes it even better. There’s an innocence and almost naivety about the band – they still don’t know just how good they actually are. Go forth and give them your ears now.

Verdict – I bow down to the gospel of Chrvches, a stonking 9 out of 10. 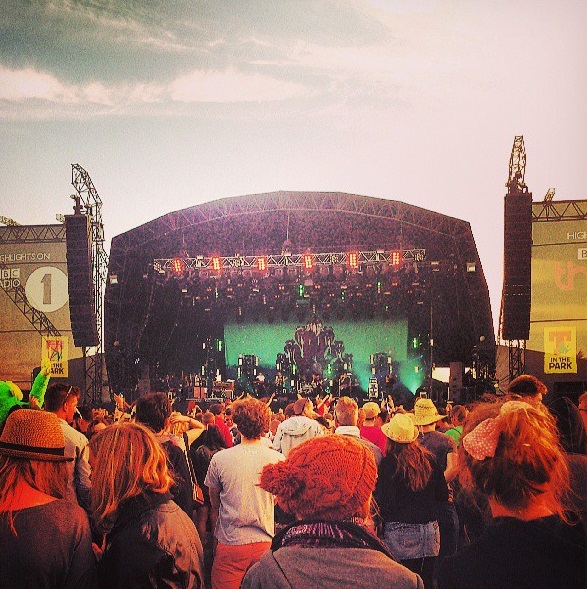 The sun setting provided the perfect backdrop for math-rockers Foals to rip the Radio 1 stage a new one with a powerful set. Frontman Yannis Philipakkis gives his all, visiting the crowd on a number of occasions, throwing his guitar around like a lumberjack chopping wood. My Number and Providence sound heavy as hell and help open up the moshpits for the first time this weekend. The reflective Spanish Sahara slows things down a bit before a frantic Two Steps Twice brings their set to a close. This was the first time I had ever seen Foals live and I don’t know if it was the fact that I missed the start of their set, or if it was the choices in their set list, but I felt like I couldn’t get in to them as much as I had done with the previous bands I saw that day. Maybe I need to go see them play a smaller venue, on their own and I’d be able to fully appreciate what they can do.

Karen O is most definitely the queen of rock and roll. She’s eccentric and encapsulating and you really don’t know what she is going to do next. Bounding on stage dressed as part Native American part country and western singer, the Yeah Yeah Yeahs go about bringing the entire weekend to a close with a fast and frantic set that is full of passion and fervour. Opening with latest single Sacrilege, the band include hits such as Gold Lion, Skeletons and the beautiful Maps in a set that spans songs from the New York trio’s entire back catalogue. A giant inflatable eye, an impromptu happy birth sing-along and a rousing version of Date With the Night brings a successful weekend of music to an end.

Verdict – Probably saved the best until last, a noisy 10 out of 10.

So the sun sets on another T in the Park as its 20th year passes in a haze of heat, sunburnt revellers and enough pints of Tennents to fill the North Sea. You have to go to T in the Park with a pretty open mind. You will see things that you really don’t want to see; it’s messy, it’s tiresome but at the heart of it all is good fun. There is no doubt that within the last few years, the overall line-up on the bigger stages has went incredibly mainstream and it did sort of feel that I was constantly going against the crowd as I made my way around the site to take in the pockets of good music that I wanted to listen to. You won’t see Little Mix getting bottled off stage like Daphne and Celeste did at Reading Festival in 2000. But apart from that, the line-up really does have something for everyone. It was my first T in a long time and I’d be lying if I said I wasn’t a bit apprehensive about heading back after all these years. But hey, I loved it and I might even go back again next year.

Words and pics by Just Boy 57.