Day two got off to a bright and breezy start with Glasgow three-piece Paws opening up the BBC Introducing music stage. The noise-mongers went about their best to rid the cobwebs of the previous day’s exertions with a half hour set of lo-fi grungy goodness. The band, who have recently found a home on Brighton indie label FatCat records (We Were Promised Jetpacks and The Twilight Sad), showcased a number of songs from debut album Coke Float. Think Sonic Youth, Mudhoney with a bit of Nirvana thrown in for good measure. Very loud and very fuzzy, a perfect way to start the day. 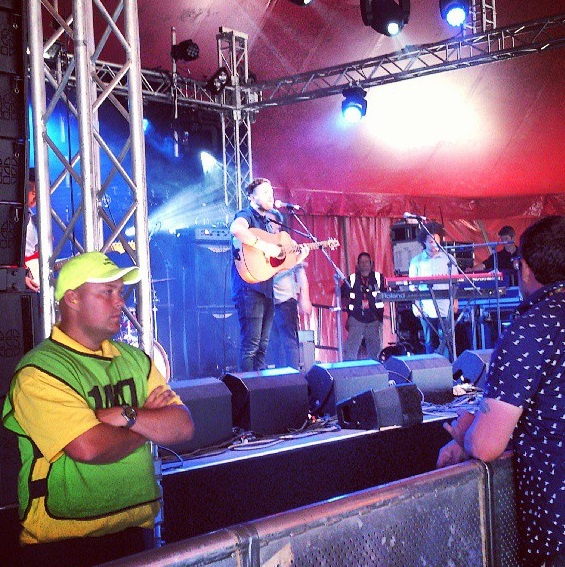 Next up was Paisley lad Michael Cassidy who pulled a large crowd in the T-Break stage tent. I always thought Michael was a singer/songwriter who played on his own so to see him fully fledged with an all singing, all dancing band was a pleasant surprise. His brand of acoustic-ness, not too dissimilar from his Paisley pal Paolo Nutini, sees a number of influences coming across, from nursery rhymes to country with single’s Battleships and 15 years providing the highlights of the set. With support slots for Ocean Colour Scene and Ben Howard already under his belt, expect big things from this man and his band for the rest of 2013.

Think of the bands that played at your school when you were young and it’s very rare that any of them went on to bigger and better things than the school Christmas concert. However for The Strypes, a four piece rhythm and blues band from Cavan, Ireland, they’ve swapped playing assemblies to packing out tents at Scotland’s biggest music festival. They are young, very young in fact (15-17 years old) and draw on inspirations from bands such as The Yardbirds, The Rolling Stones and Dr Feelgood to name but a few. Signed to Elton John’s Rocket Music Management, the band frantically go about their business, having the crowd in the palm of their hands with their fast-paced speed blues. Blue Collar Jane and Hometown Girls are the stand outs of the set. For a band so young to have this much stage presence is almost like a breath of fresh air. And with fans in Paul Weller, Dave Grohl and Noel Gallagher already, the future’s most definitely bright for the Irish quartet.

You’d be forgiven for thinking that polite indie chaps Noah and the Whale would stand out like a sore thumb at the rough and tumble that is T in the Park and to be fair they did, but for all the right reasons. Playing a mid-afternoon set on the Radio One stage, the band from Twickenham showcase a range of songs from new album Heart of Nowhere, with their new, more electric sound bringing a new lease of life to previous singles such as 5 years’ time. A stunning rendition of Blue Skies and an even better cover of Daft Punk’s Digital Love see the band become an unexpected highlight of the day. A rousing version of LIFEGOESON and it’s a job well done for the sharpest dressed men at the festival.

Verdict – More a glass of Pimms than a pint of T, but an unexpectedly tasty 7.5 out of 10.

Where do you start with Frightened Rabbit? The Scottish band have been earning the plaudits all year after the success of latest album Pedestrian Verse and with the support of Radio One, new label Atlantic Records and perhaps Scotland music lovers in their entirety, the band play possibly their biggest gig to date in front of thousands at T in the Park.

Opening with the foot stomping Living in Colour, the band showcase a range of songs from PV, with Backyard Skulls, Holy and Late March, Death March being lapped up by the swelling crowd. Singer Scott Hutchison looks happily bemused by their reaction, telling the audience that he had waited 10 years for this day. Swim Until You Can’t See Land provided the biggest sing along of the set with Woodpile sounding as majestic live as it does on record. Finishing with Keep Warm, a song that the band has decided not to play for a year after T, they eventually leave the stage to rapturous applause.

This set could well be a career defining moment for the Glasgow based band. I’ve been a fan of FR for a number of years and to see them go from a 2-piece playing to a couple of people in a pub, to a fully-fledged 5-piece indie rock band, selling out venues, playing to massive crowds at festivals and hearing them on the radio during the drive to work, really does fill me with a sort of pride. The most impressive thing is that they’ve done it their own way. There’s been no reality TV show or massive sell-out from these guys. They’ve written good songs, worked extremely hard and have never forgotten the people who supported them in the beginning. I just wish that all bands followed this mantra. 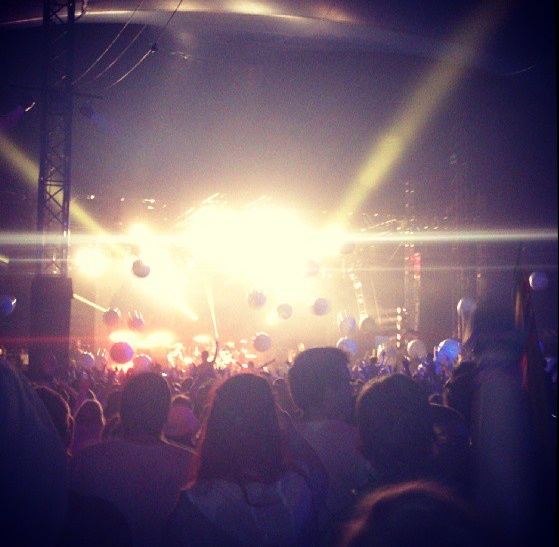 In a similar vein to Frightened Rabbit is Scot’s rockers Twin Atlantic. Playing to the largest crowd I saw in the King Tuts tent over the entire weekend, the band play a blistering set of rock tunes that sees the enthusiastic crowd almost sing every word back to them. The set heavily relied on songs from debut album Free, with We Want Better, Man and Edit Me almost taking the roof of the tent right off. I’ve seen this set of songs about five times now at various venues across the country, but with the passion that these guys play with and the fact that it’s arguably one of Scotland’s most loved bands at the moment at its biggest music festival, it’s like they are playing them for only the first time. Crash Land provides the usual massive sing-along and there is even time for a new song, a punky little number that has most definitely got me excited for the new album. Finishing with a rousing version of Make A Beast Of Myself, accompanied with glitter balloons ahoy, the band leave the stage with the crowd desperately seeking one more tune. Roll on album two.

Closing a busy day for me was Mercury music prize winners, Alt-J, who headlined the King Tuts tent. The band was up against Rihanna and Beady Eye for the battle of the punters but they still managed to pull a massive crowd, highlighting the high esteem they are held in by music lovers alike.

Showcasing a number of songs from prize-winning album An Awesome Wave, the bands experimental style and unique vocals make for a highlight of the entire weekend. Tracks Tessellate, Buffalo and Dissolve Me are brilliant with the beautiful Matilda providing the big sing-along of the set. The band doth their cap to Snoop Dogg, sampling Next Episode at the beginning of one of their tracks and you can definitely feel the hip-hop influences that come through their songs and their live performance. Single Breezeblocks sounds as good as when I first heard it and there is even time for a haunting accappella version of A Real Hero, the track made famous by the Ryan Gosling film, Drive.

Having loved the album as soon as I heard it, it was great to finally see the tracks live and I will definitely be making the effort to catch them playing again.

Verdict – Something a bit different to a pint of T and a greasy cheeseburger, a big 9 out of 10.

So that was day 2. A brilliant day of unsigned bands, established acts and career-defining moments.

Words and pics by Just Boy 57.