We arrived at the venue to find a small queue waiting patiently outside, despite it being 15 minutes after “doors open”. Unsurprisingly, the majority of the queue comprised portly, shaven headed (or were they?), middle aged blokes. Typical SLF crowd then.
Fortunately we didn’t have to wait long and quickly got checked in and stood at the bar. Moshulu has had a wee bit of a facelift. Now renamed The Warehouse, its new logo adorns every wall. There’s actually working lighting in the place now and thankfully the scuzzy black carpet has gone. It used to be so sticky, unless you hopped from one foot to the other continuously, you risked being rooted to the spot all night. Either that or leaving your shoes behind – a particular hazard if, like me, you favour brothel creepers. Anyhoo, it’s been replaced by some shiny and new laminate flooring. Woohoo.
After waiting an age while the barmaid furnishes me with a coke and three pints of the slowest pouring lager in the world, I’m shocked when she asks for only £5 something. I quickly pocket my change and make a hasty exit, believing her to have made a mistake. I later find out that Thursday night is promotions night with a £1.50 price tag on their Carlsberg, even when there are gigs on. Gift!
We’re still supping the first pint while perusing the myriad SLF t-shirts at the merch stall when the support band kick off. The doors have only been open 15 minutes and there are barely 50 people in the place but I suppose that, despite the late opening, schedules need to be kept. We mosey down to the dancefloor to have a look. It’s Heller State, a 3-piece pop-punk band featuring a bearded mohawk bassist who sings, a skinny wee guitarist who looks about 14 who sings and a lanky livewire drummer who doesn’t sing. At least not into a mic anyway. I’ve seen them a few times before and usually think they’re pretty good at the Dammit era Blink sound for fifteen minutes or so then my mind starts to wander and I start glancing at my watch with alarming regularity. Tonight is no exception. Their cause isn’t helped by the dreadful sound. The bass and drums overpower everything else and the guitar and vocals sound like they’re coming through soup. But the youngsters plug away relentlessly despite the fact there are more people at the bar than on the dancefloor. They don’t even let a mobile bass drum with collapsing pedal deter them and complete their set with a steely determination that would get them an A for effort though the generic material would only get them a C-.
The place has been filling up while they’ve been on. There’s now a sizeable crowd, though the venue is far from full. It’s still early yet though. A couple more £1.50 pints are quaffed and on my way back from the bar one time, I discover that the shiny new laminate flooring is now slippier than an ice-rink. Once again, a particular hazard to the creeper wearer. I take my time though and get the drinks safely to their owners. 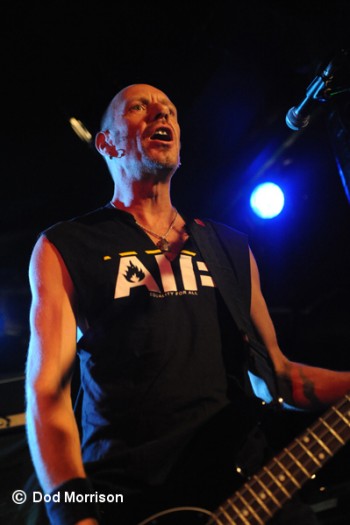 The incidental music coming over the PA makes way for the familiar strains of the Go For It instrumental, the traditional Stiff Little Fingers entrance tune. I expect a rush to the dancefloor so make my way down there sharpish and get a spot in the second row. The neck hairs go up as the crowd start shouting out the call-and-response guitar parts form the tune – Dat Dat Dat, Dadalada. Dat Dat Dat, Dadaladaa-da – and I think to myself what an amazing intro this is, even though I’ve participated in it heaps of times before. A cheer goes up as the band take their places and I’m pleased to see that there’s no matching shirts this time. (I always though they looked naff as fuck). There’s a quick hello from Jake and then the understated opening guitar riff to Tin Soldiers. I snatch a quick look around. The dancefloor is full but not packed. The song kicks in. Bassist Ali McMordie leaps in the air and promptly slips on his arse, crashing into his bass rig. Fortunately it doesn’t topple and a roadie helps him to his feet as he carries on playing, a sheepish grin over his face. The bouncing starts in the crowd too and my son whizzes past grabbing my arm and dragging me with him. The madness begins. Strangely enough, the sound problems from earlier on have disappeared and the band sounds crystal clear. Bright and punchy.
As Tin Soldiers gives way to the next song, I realise that, much as the walk from the bar was slippy, with all the spilt beer it’s far worse down here. I decide that I want to finish the gig in one piece and leave the pit for a safer vantage point. The set continues with Just Fade Away and I see a guy lose his footing and go down. Before he can be pulled up again another couple fall over him and it looks like trouble. Fortunately people cotton on quickly and get them back to their feet with no apparent damage done. It seems to put the wind up everyone though as a wide gap appears between the first couple of rows on the barrier and the rest of the crowd.
The band carries on apace and we get At The Edge, Get A Life, Doesn’t Make It Alright, Nobody’s Hero all sounding brilliant. Jake makes reference to the time they’d had with Bruce Foxton in the band then says “but only one person could play this bassline.” Ali chops out the rumbling bass chords that usher in Back To Front. It’s stunning and I realise once again how great some of the songwriting and arranging was even after the Ogilvie period. It’s hard to define exactly why Ali being back in the band makes such a difference, but he really does. It’s tangible. He’s quietly cool on stage (apart from his earlier fall of course) not moving too much, just studying the crowd intently with that bemused half smile on his face the whole time and yet his presence seems to energise the whole band. I suppose it’s just the right chemistry. 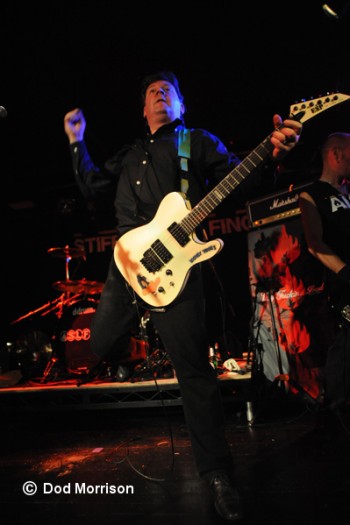 Strummerville is played to a great response showing why it’s now a permanent fixture in the setlist. Roots, Radicals highlights the way that SLF could take a cover version and really make it their own. A new song is aired. I think it’s called One Man Army. It’s OK. A bit metally maybe, but not bad. Silver Lining is executed perfectly, while an incendiary Wasted Life and Fly The Flag get everyone going mental again, despite the slippy floor. All too soon the riff they borrowed from Sammy Hagar ushers in Suspect Device. During the middle section, they drop the volume down a bit while Jake does the band introductions and thanks everyone for coming, before raising the roof as they play out the song. 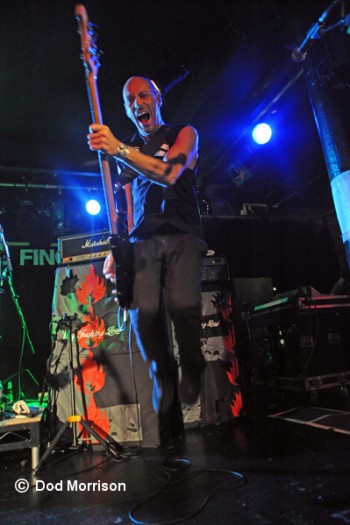 Of course, they’re not going to get off with that and, before long the chants of the crowd bring them back on stage. “We were just messing about with this one. Dunno if we’ll play it again” says Jake and they kick off a punchy guitar riff that’s naggingly familiar. It’s Elvis Costello’s Pump It Up and they proceed to do an amazing version of it, turning it into the snarling R&B monster it always should have been. All the while Ali is grinning at the crowd like a Cheshire Cat, enjoying their reaction to it. There can only be one tune to follow that and sure enough, the plaintive wee intro begins. Of course, it’s Alternative Ulster and the crowd turns once again to a frenzy of bouncing heads and flailing limbs. When it’s over, I’m hoping for a run through Marley’s Johnny Was but the band wave and the DJ starts to play immediately so we know that’s our lot. I look around me and I don’t see anyone grumbling too much. The Fingers have done us proud once again.  New York Johnny.