I’d been looking forward to this gig for ages after reminding myself of their material via their rather excellent Going For Gold – The Greatest Hits and The Singles Collection albums, like a couple more bands I enjoy they seem to have a large back catalogue to pick their set from. Slightly less frantic than many of the bands from the style that they seem to derive from and its a mellow singalong as you’re driving to word in the morning.

A slight clash of gigs tonight with the rather interesting Scots band Frightened Rabbit playing virtually across the road at The Warehouse.

Anyway, the Music Hall it is with the Best Bogs in ABZ awaiting the discerning gig go-er and I’d fully imagine that the toilet trap doors actually lock too, surely a bonus, although I admit, I didn’t actually check the locking issue. Maybe next time. 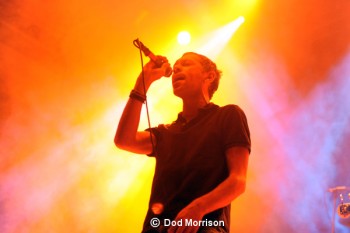 Support on the night is a (previously unheard of by me) David McKellar from Cumbernauld. Despite having had the option to go into the standing area remembering the last time I saw a more tuneful act at the Music Hall (the Goo Goo Dolls) I’d fully enjoyed it upstairs in the seated area so upstairs it was. David took at the stage just after eight when the majority of the (allegedly sold out) crowd were still arriving and the ones that took to the floor stood well back from the stage, something I never seem to get, especially at the bigger venues, but hey, I was upstairs and very close to the stage so its not something that should have bothered me. The sound of Davids voice between songs was virtually impossible to make out and one guy beside me asked me what song he’d just introduced we’d no idea. Surely something that the venue should address. Its not so obvious during the songs so maybe a separate mic should be employed for the spoken word bits. The same happened when The View supported Primal Scream and that was a couple of years back now. McKellars work was probably let down a bit by the sound system (get yourself to The Lemon Tree next time) but I enjoyed it, as did he I think. You can hear some of his tracks on his myspace at…
http://www.myspace.com/mckellardavid  I’ll certainly be keeping an eye on his progress.

As soon as the first guitar is unplugged by one of Davids band then thirty odd young ‘uns flock to the barrier at the front of the stage. Now that confuses me, why not just go there during the support and show a bit of interest in their performance? Is it some form of `we’ve never heard of you so we’re not coming close… yet` snobbery? I’ve been going to gigs for a lot of years now and theres nothing worse than bands getting bigger and as that happens Aberdeen sadly dissapears off the tour date list. Why not give ‘em a chance next time?

At around quarter past nine Rick Witter and his band take to the stage to a much busier crowd although it still seems waaay short of a sell out to me with around half the seats still empty. Anyway, they kick off with the brilliant Dolphin, followed by Where Have You Been Tonight and then She Left me on Friday which is the first glimpse of the sing along crowd that Aberdeen can be so good at. Devil In Your Shoes and This Day was Ours prepare the crowd for the epic that is Going For Gold. All the time I’m thinking the crowd it still a bit flat, or just slow to get into the band although from upstairs you can see people dotted around the crowd singing along with virtually every word. Its good seeing people enjoying themselves like that is it not? Mark, Around Your House, Bully Boy and I think Speakeasy is next up with the latter again getting the crowd more and more involved although Witter keeps the between song verbal to a minimum. Tonight it doesn’t really matter, as Shed Seven churn out all those classic songs. Feathers, On Standby and finally the excellent Ocean Pie gets the crowd really singing along throughout the venue. High Hopes and The Heroes just proves that the set list is in good order as the Sheds keep the crowd well and truely in the palm of their hand. Disco Down and Getting Better again keep the singing along going right till the end. 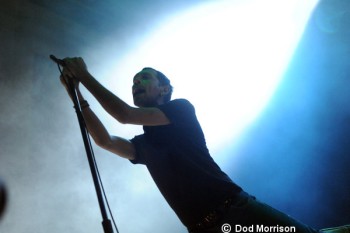 The band depart the stage for a few minutes as the customary Stand Free gets an airing from the pretty mixed age crowd. Out By My Side is the first of the three song encore followed by a cover of the Stones Jumping Jack Flash. The superb Chasing Rainbows is an absolutely brilliant way to end this performance, and I hope they’ll be back in Aberdeen next year, as well as many, many of this crowd I’d imagine.  Still Burning