The Sunday at Rockness couldnt come quick enough for some campers, with rain that kept switching on and off the night before and complete with a cold temperature it makes for a difficult experience in a tent with not much protection from the elements, especially the cheap £20 tents that are so popular nowadays. Tent-wise you get what you pay for don’t you!

A conversation last night informed me about how the Rockness layout had changed but I didn’t think it was actually that bad. Perhaps the Rock n Roll Circus and Howard’s End tents were a bit close to each and the pair of them were a bit of a walk from the main stage but such is the choices you have to make when deciding which acts to go and see. The Sound City tent (the orange one) was definitely too close (see pic below) to the Golden Voice (the big blue one) tent but maybe that’ll be remedied next year. 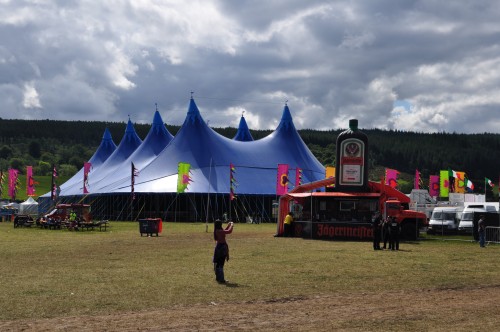 Sundays music feast began with a visit to the Rock n Roll Circus and a double helping of acts new to me starting with the beautiful and one for the future trio that was Carly Connor. A little inexperienced perhaps but jeez, once she got into song it was as if she’s done it for years. Remember the name, I’m sure we’ll hear a lot more about her in the future. I’m sure the forty or so people who also saw her would agree. The intention was to go to the comedy tent between Carly Connor and the next band but it didn’t get started till over well after 1pm instead of the programmed 12.30. 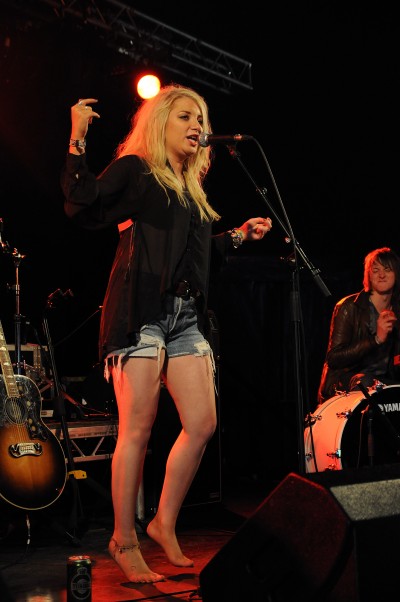 Second portion were boys from Brixton, Drunken Balordi. Even the name suggests the accordion, violin, guitars and a riotous image and so true it is. A vocal that I dare not compare to a real punk legend with the fun sing-along songs to match. I’d absolutely go and see these guys again if I could. 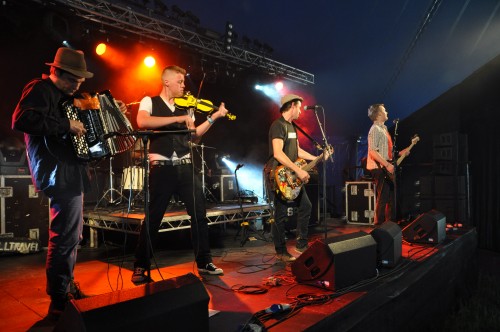 A quick snack and it was time to make our way to the main stage for The Twilight Sad, a band I’ve seen a couple of times before but never in daylight so it was a bonus to see just how intense vocalist James Graham actually is when performing. Another good Scottish performance but somehow I think I’d rather have seen then in the Golden Voice tent, just to condense the atmosphere they create. Maybe that’s just me though. Apart from that I think I’ve just realised I like singers with a bit of grrrr in them. 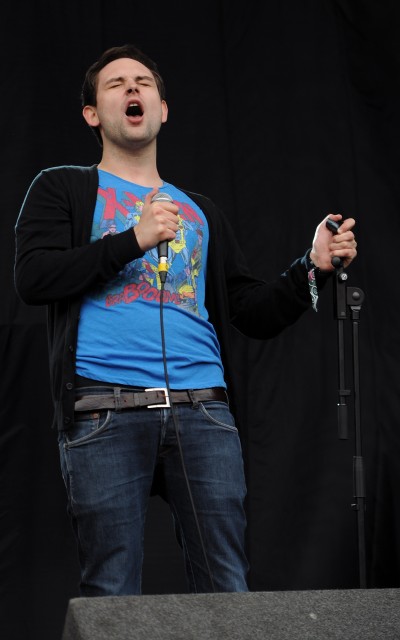 A bit of Scottish Music God spotting (see pic below), some refreshments, a bit of The Boxer Rebellion and we were headed back up the hill to the packed Golden Voice tent to see beatbox maestro Beardyman. Recommended to me by FnS contributor Jo-d-locks it turned out to be invaluable advice well received, a fun but rhythmic set which just flew past. 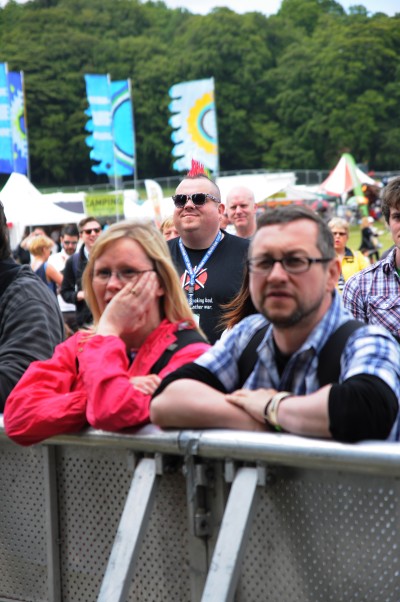 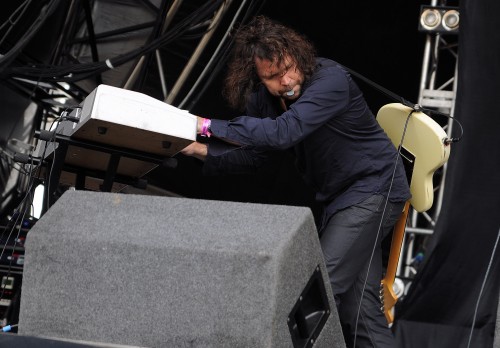 Time for our last venture of the weekend into the Sound City tent were we saw short, very different but entertaining sets from The Suzukis, local boys The Boosts and GoGoBot.Hopefully this stage will get a bit more priority next year as it’s a chance for local-ish bands to play to audiences they wouldn’t normally. Sometimes the tent was full, other times almost empty, and I don’t think that was down to the quality of the acts, more that people didn’t know what was on, and when. Still, I’ve enjoyed some good sets in here over the weekend and that’s what its all about at the end of the day. 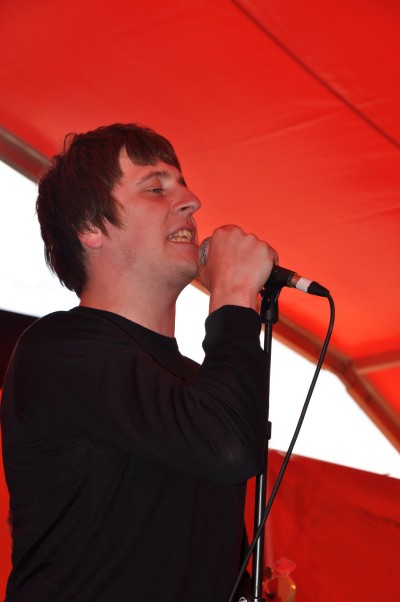 By now the home straight was in sight, the car was packed and ready to leave for home but there were still a couple of gems to enjoy. The first was a sorely underpopulated Rock n Roll Circus tent for a sterling performance from the perhaps strangely named Sparrow and the Workshop, another band that in my opinion would not have looked out of place on a `higher` stage.  Still, glad I made the effort to come `back up the hill` for this one.

Like many others it was time for us to get down to the Main Stage area for the majority of the rest of this evening, just makes me wonder where all these people were during the days performances though. I’d seen The Wombats before and enjoyed their expected indie-pop set finishing with the `Lets Dance to Joy Division` song which gets most of the arena bouncing along.

My final mission away from the Main Stage was to take in the Simian Mobile Disco set at the Golden Voice tent, again with near a full house and a cracking atmosphere. I enjoyed what I heard and it looked like the rest of the crowd did too. 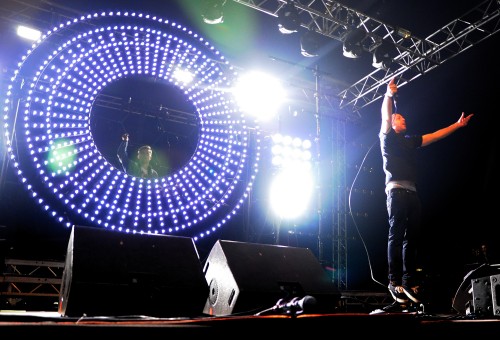 I’d intended staying to watch Paolo Nutini but after some miserable early set songs from Glasvegas it was time to go home. After The Wombats bouncy atmosphere the crowd then changed down two gears and waited patiently for some of James Allan & Co’s early and more singalong songs which I’d hoped for from the beginning rather than their latter work. Still, it’s just my opinion and I’m sure many Glasvegas fans will have enjoyed it. I wasn’t bothered about missing Nutini as I’d have preferred something more bouncy than soulful as a Main Stage closer. Paolo would have been a great choice for a sunny Saturday or Sunday afternoon though, cold beer in hand and just chilling in arguably the most beautiful festival setting in the Scotland. 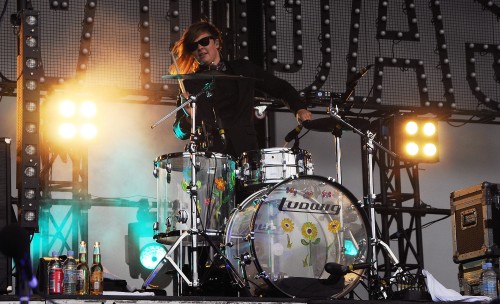 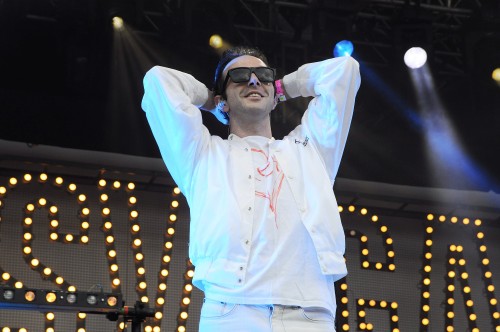 All in all I’ve had a great weekend at Rockness, sure the line-up didn’t always suit what I like but seeing `new` bands for the first time is always interesting and where better than the timeless experience that is a music festival? The weather could have been better but its Scotland, prepare for the worst and enjoy the best when it comes along. Highlights for me were the Saturday in the Golden Voice tent and the lowlights was probably the cold and wet weather that spoilt Saturday night a little bit.

Do I recommend Rockness Festival? Absolutely.