Time for something just a little bit different for reviewer B and Still Burning, a visit to the Blue Lamp and the charms of Pokey LaFarge and the South City Three. And yes, they were damned impressed by it all.

I’d like to start this review with an apology. I know, I know. Unusual for anyone who writes reviews of any sort, to make an apology. Not even a sarcastic Jeremy Clarkson type of apology where there is a slight pause and then some cutting comment made straight to camera in a slightly lower voice. No. A proper apology to the support band who I only caught the last few bars of their last tune. So to Rob Heron and the Teapad Orchestra I’m sorry I missed your set but going by the crowd reaction and the talk in between bands you guys nailed it and I wish I’d witnessed it first hand.

On to the main event. It was sold out. Thursday in Aberdeen in March and sold out! There was a genuine buzz around the Blue Lamp and an entire spectrum of ages mixing and chatting and excited about the band that was about to grace the stage. I overheard at least 6 separate conversations starting with
“Have you seen these guys before”?
“No”
“ I was here last year and they were………superb/great/brilliant/entertaining/fun”
There seemed to be about a 50/50 split of folks who had come to see them last year and come back and new audience members. I was impressed that this had happened. At this point I should admit that I had never heard the name before. I deliberately didn’t immediately consult the google god or youtube goddess to find out more. So, I was a brand new set of ears and eyes that found himself reviewing the crowd before the act came on.

Pokey LaFarge and the South City Three arrived onstage.
There was an Old style Western feel that was obvious. The Southside three were The barman on double bass, the poker player/twinkle in his eye sharpshooter on harmonica, snare drum and washboard, the Sheriff on archtop 30’s style acoustic lead guitar and then there was Pokey himself.
Pokey stood out, he was the front man and bandleader. Immaculately dressed in shiny black cowboy boots, thick woolen pinstripe suit, blue cotton, knife edged creased shirt and bow tie. Pokey was smart, they all were. They had an image, presence and obvious commitment to the eye already. I like that.

They started. Unashamedly and quite splendidly old school early American music. I immediately thought of Hank Williams, I was reminded of the black and white footage you see on TV from The Grand Ole Oprey show. This was authentic, honest and great to watch. I’m no expert on this genre of music, I could go and consult Lord Google but I’m not going to. I think my honest opinion will suffice. 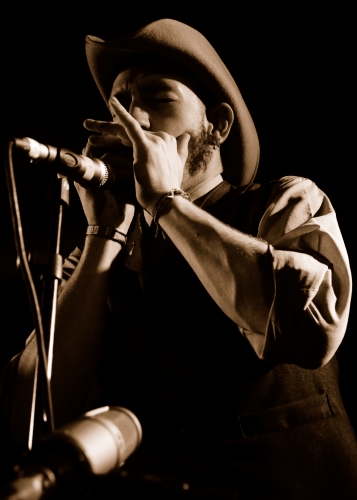 The moothie player was great to watch, a stunning player and lots of charisma with it. Very cool indeed. The sound these guys made was so together and connected it shone through to the crowd. You couldn’t help but smile at the interactions both musically and socially. I particularly loved the way the band would congratulate each other after a well-executed solo part. Pokey in particular was talking to the other guys constantly, almost looked like he was thanking them for how they made the whole band sound and feel. A real team effort here. This became very apparent when Pokey himself did one solo song. I think it was called “Josephine”. His demeanor changed slightly. His voice became a little harder in places and softer in others. His stage dynamic changed when not with the rest of his posse. At his point I wrote in my notes that he was more Jack White than Hank Williams. Up to this point I had also written that I didn’t think he had a very distinguishable voice but solo his voice came into another level that was quite painfully beautiful.

The band were back on, by this point the energy between band and audience was mutually beneficial and flowing back and forth in buckets. The solo spots of the players was stunning, each very accomplished musicians. I got the occasional glimpse into other styles. A little shredding and a touch of classical scales from the lead guitarist led me believe even more this style of music was a considered passion, not just a show for a “gap in the market”. 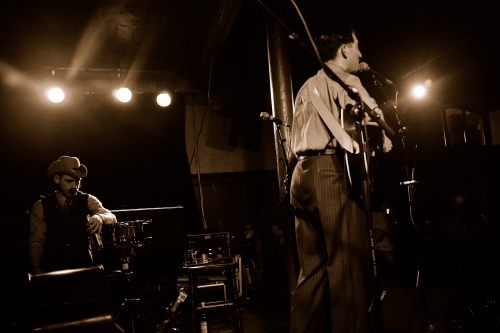 When it came to the end of their set they simply couldn’t get off. There was no way they were getting to go and they launched into a 6 song encore of more of the same skiffle/country blues style familiar beats that you just cant stop tapping your foot to.

Then the end came. Signified by Pokey putting his Jacket back on and a very rare phenomenon in a pub in Aberdeen.
There was a standing ovation for the band! I’d never seen this before. I was really quite proud of us reserved Aberdonians. Having it in us to be passionate enough about live music and an act that were by no means mainstream to come out, sing, dance and truly appreciate good honest fun. Don’t mind saying as a performer myself, it restored me in some way.
Pokey and the band went off stage, obviously had a wee moment to themselves and were then out chatting for at least half an hour after. Still Burning asked the guitarist;

“What’s your favorite place to play?”
“My Hometown.” Was the perfect retort.

Pokey himself was out speaking to folks till the death of the night. Hats off to the man, they tour the world and he was still there chatting, laughing and thanking. Nice to see.

Tonight was a wonderful surprise and experience for me as a reviewer, audience member and all round champion of live, honest music.

Go look them up, go listen to their stuff, go buy a tune or two. They have been in my head for 5 days now and they wont shift. My 12 year old daughter went to the Xfactor show last week and said it was “ok”. I’m not quite sure what that means to you, but to me it speaks volumes. Think I’ll buy her a couple of Pokey’s tunes for her ipod and just sneak them in there.

Should you go and see them?

Fuck it, I will buy the ticket and take you…

Thanks to the bands, crowd and Vocoustics promotions for a brilliant night. I heard someone say that they were born out of their time. I couldn’t disagree more, they are exactly in the right time to help remind us what music and a show should be about. And anyway if they had been born in their “correct” time I wouldn’t have seen them. 😉

Words by B, pics by Still Burning.

Last word goes to Still Burning, stating that, apart from the lively music and singalong songs there was a genuine warmth between Pokey and the audience that you really don’t see much these days. Haste ye back lads. SB. 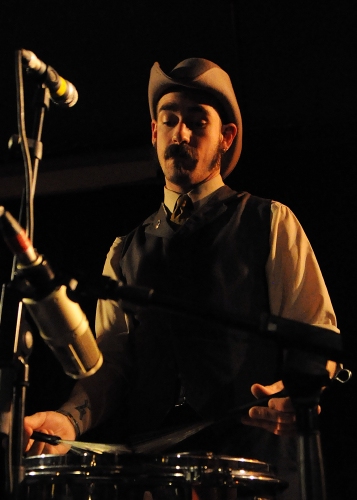 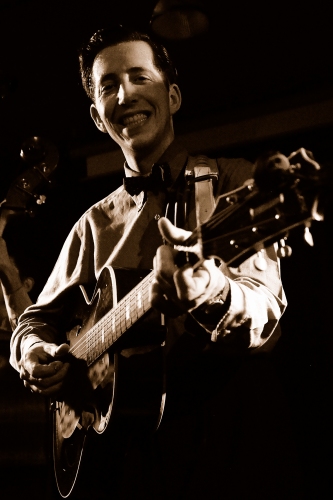 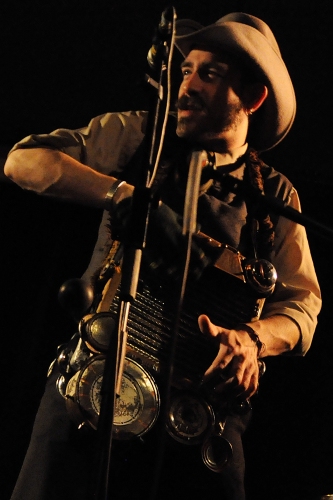 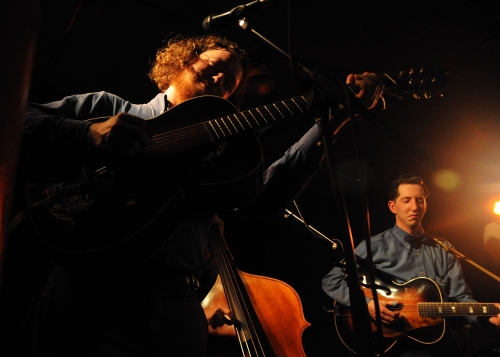 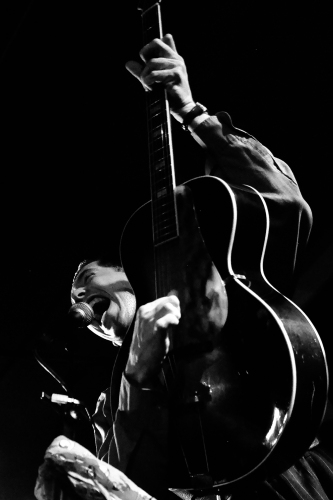