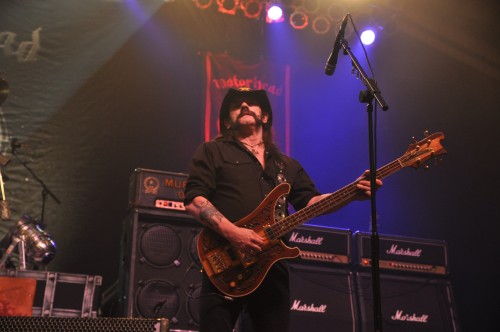 Even though I only listen to the first 5 Motorhead albums (I prefer the ‘classic’ line-up of Lemmy, Fast Eddie and Philthy Animal Taylor), the news that they were playing in Aberdeen for the first time in almost 30 years was a must attend for me. Sadly the original venue, The Music Hall, was cast aside due to demand for tickets in favour of the sound-mix sapping AECC.

I cannot for the life of me recall the name of the first support and a bit of searching has failed to turn up the name. Maybe my Googling technique is flawed. Perhaps one of the other FnS guys knows the answer and can fill in the blank (it was Skew Siskin). What I do know is that they were fronted by a leather clad woman with a throaty vocal technique which actually had me thinking the band was led by a Vince Noir-from-Mighty-Boosh lookalike until the lights caught her at the right angle and I realized there were breast there. Oops. In any case they weren’t my cup of tea, kind of bog-standard stuff and one song that featured heavy use of the lyric ‘Fuck you’, accompanied by raised middle finger was just irritating.

Next up was ex-Hanoi Rocks frontman Michael Monroe. As I had to explain to my wife and mates who attended the gig with me, Hanoi Rocks were an early 80’s glam metal band who had a member killed in a car crash with Vince Neil from fellow metal goons Motley Crue. Michael Monroe appears to be stuck in the early 80’s, with feather cut blond hair and clothes to match. It was pretty horrific stuff, particularly the Damned cover. Ginger from The Wildhearts was playing guitar. Spotting that fact was about the most interesting thing that happened during that set. And I never liked that band either. 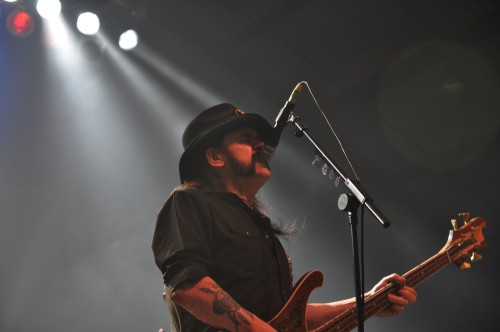 Motorhead took to the stage and I was convinced they had started the set in true ‘No Sleep Till Hammersmith’ style with ‘Ace of Spades’, in a get-the-big-one-out-of-the-way fashion. It turned out however to be another song with the same bass riff, possibly called ‘We Are Motorhead’. Maybe the AECC sound mix made it seem more similar than it was but the sheer volume combined with the acoustics meant the set was just a wall of noise. I had hoped for a few more of the earlier tracks I was familiar with but apart from a late set appearance from ‘Overkill’ and of course ‘Ace of Spades’ I was a bit ignorant of what they were playing. I do know there was a drum solo though. I’m a bit disappointed that Lemmy would allow a drum solo but then again it’s probably just so he can go have a fag or something.

I ended up a bit disappointed by this gig, although it’s probably my own fault for going along with a lack of familiarity with the material from the bulk of their career. I can tick them off on my must-see list I suppose but I don’t think I would rush back to see them again.    Godzilla Blues