No stranger to a guitar himself, reviewer B went along to see the great Joe Bonamassa’s first visit to the north east of Scotland and here is what he thought of it all.

We arrived and were welcomed with a midnight black envelope with silver writing on it with instructions for photographers. This whole operation is incredibly slick and professional. I met an old friend who said “Surprised to see you here, this is a classy evening”. I laughed with him at the time and then walked slowly away from him wishing I’d at least changed from shorts to long trousers. The amount of new leather jackets around in the crowd made me feel suitably underdressed. Rock n roll.

The gig was busy, not sold out but busy. All seated and there was a def majority of middle aged gentlemen who at one point, or still did, played guitar or in a band in some capacity. Then again I realised I myself, was in this category (.

I had posted something on a certain social networking site about this evenings gig and immediately surmised that JB had an impressive amount of controversy around him. I did my homework. I was aware of the six-string slinger, but hadn’t actively sought out any of his music. Basically there were two camps. The fans and the sceptics. The fans need no explanation but the sceptics seem to see JB as a bit of a charlatan. Phrases like “He’s not real… man”, “ He doesn’t have soul”, “Pseudo bluesman” were thrown around. Seemed a bit harsh for a man who has produced an impressive body of work over the last 13 years. 12 albums!! Other impressions I was left with during my “research” were that he was to be admired for trying to approach his chosen genre of music with a fresh perspective. Something that will feature in my opinions later.

In my humble, JB has been immersed in a minefield within his genre; I keep saying this as I was actually undecided what his chosen genre of music is. I would actually go as far to say that he would hate to be pinned down on this too. Hard for a man who’s playing and reputation was firmly set in “The Blues” after being invited onstage with BB King at the tender age of 12. He also played in a band with mates who just happened to be the dependants of  Miles Davis, Robby Krieger of The Doors and Berry Oakley of The Allman Brothers Band. No pressure eh? Poor chap.

So, anyway, you’ve got to feel a certain amount of predestined musical claustrophobia for the man. I do anyway.

On to the show. No support, show at 8pm. Started on time. Just JB and an acoustic. Put a smile on my face straight away. And as it seemed the rest of the crowd were best pleased with this too. An acoustic solo start called “Palm Tree’s”. Great start.  For the second tune we were introduced to a piano player and percussion in the form of bongos. Both gents were of a “biker” ilk. I was beginning to see a wee glimmer of the pseudo claims appearing. Piano player was a big guy decked out in classic American biker gear. I could be wrong, and apologies if this guy dressed like that as normal, but just seemed a little clichéd to me. The tunes were good though. Thoroughly enjoyed this section. Clearly talented player and JB came across as a genuine guy. JB finished this section with  “Wake up Dreaming”. Then I heard it from around me for the first of many times, blokes confirming to wives, partners and mates. “Told you this guy could play!” Yup. Agreed.

On to the electric part. “Dust Bowl” was up first. Slower paced heavy track. Beautiful big, creamy guitar sound. Struggled to hear the vocals on this one though which spoiled it a wee bit for me. No fault of the band though. This is where the above reference to “a fresh approach” came to light. An odd mid section that came from nowhere near the rest of the song. This struck me a few times during the evening. Great big guitar riff, great groove to a tune and then an unexpected twist. Admirable? Fresh? Or odd? As a JB virgin ‘til just this week. I really couldn’t judge at this time. But can see the controversy points and I’m only 6 songs in!

The crowd loved the big guitar riff stuff. Well played, beautifully played in fact, but for me appeared almost too controlled, too measured. There seemed to be no desire to really break into a little chaos. I’d have liked to have seen a twinkle of mischief at this point. But it was only song 8 of 19. Maybe it wasn’t time yet?

Another guitar was brought out, for those interested, a Gibson 335. A favourite of mine. I loved the sound of this. Big and powerful and suited JB’s style perfectly. He clearly likes playing this guitar and the sound it made. I could almost hear the cash machine ringing this weekend in our local music store and credit card numbers being punched into a laptop near you. This was down and dirty Hammond tinged rock/blues. I liked this, reminded me, surprisingly, of Whitesnake in the Bernie Marsden incarnation. The crowd loved this. This is what they wanted. Big solos, big dirty guitars and a very familiar beat.

Then we went on to a new track from the new album. “Dislocated Boy” was delivered flawlessly. There’s that uncomfortable mid section again. The vocals were there, clear for the first time tonight. A good voice. In the upper range in a Boston kind of way. Followed up with the title track from the album “Driving Towards the Daylight”. This was the first time my mind wandered to the crowd. Lots of very understated air guitar, actually just air fingering (careful now, get your mind out of the gutter folks!) There was lots of foot tapping, head bobbing and occasional “whoops”. But like JB himself to this point of the proceedings. All very measured and safe.

At this juncture in the review I’m struggling a bit. I was waiting for the “Money Shot”. I’m waiting for what makes this guy different, special. I was waiting for Joe Bonamassa’s tune, melody, riff even that everyone knew and went wild for. Some more beautifully sounding and executed guitar playing was done. Some more top quality vintage and signature guitars came and went but the stand out tune, for me, unfortunately did not.

He finished the set but came back out to tell the crowd about the next tune, “Sloe Gin” and how he had dropped it from his set for a while and got shed loads of letters of complaints about it. Big cheers from the crowd, beautifully played with some exquisitely  intimate and quiet parts (predictably) suddenly exploding into full volume sections.

Then the last tune of the night, “The Ballad of John Hendry”. I was expecting the summit of the night. The moment of chaos, mischief when the band and JB let loose, cut free and went for it. Maybe they felt they did and I am positive that a lot of the crowd did too but I just didn’t see it or more importantly, feel it. I would love to have seen him, for want of a better phrase, just go for it.

The evenings entertainment was of great quality, did exactly what I expected and I think that was the problem for me. It was safe and measured to the nth degree! There was a raw, emotional passion that was missing or not communicated to me. The moment where the timing was gone and brought back, the guitar howl that broke into uncontrolled feedback, the part where his fingers couldn’t keep up with what his brain was trying to do. A musician playing to the edge of their ability to the point it’s breaking up, but just holding on. The big instantly recognisable riff or tune. But then, maybe that wouldn’t be classy?

I’m maybe spoiled by actively seeking out exceptional guitarists for most of my life and being exposed to a certain local band who have that passion in abundance. 24 hours after experiencing Joe Bonamassa I’m struggling to remember any tunes or melodies. I’ve thought hard about it and feel for him at this time in musical history and the musical genre he is known for. I reckon he is damned if he does, damned if he doesn’t and added to that, damned if he tries to make it his own. He deserves fans and to be successful and I really do hope he comes upon that signature riff or tune. He seems like a nice guy.

Did I enjoy the gig? Yes I did.

Was he an exceptional player? Yes, no question.

Would I tell you to go to his gig? Yes, it is a genuinely wonderful experience to see a world-class musician. But, you’ll enjoy it more if you’re a gentleman of a certain age and can afford your own classic guitar* and a nice bikeresque leather jacket of a weekend. (And why the hell not?)

Will I listen to the album and watch the DVD again? Yes I will. I want to investigate these odd middle sections in his tunes further.

Thanks for reading. B.

*But don’t tell your wife how much it really cost  😉 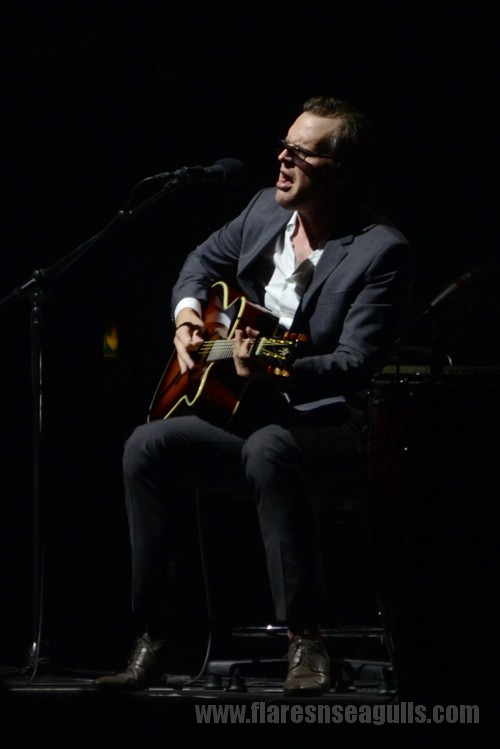 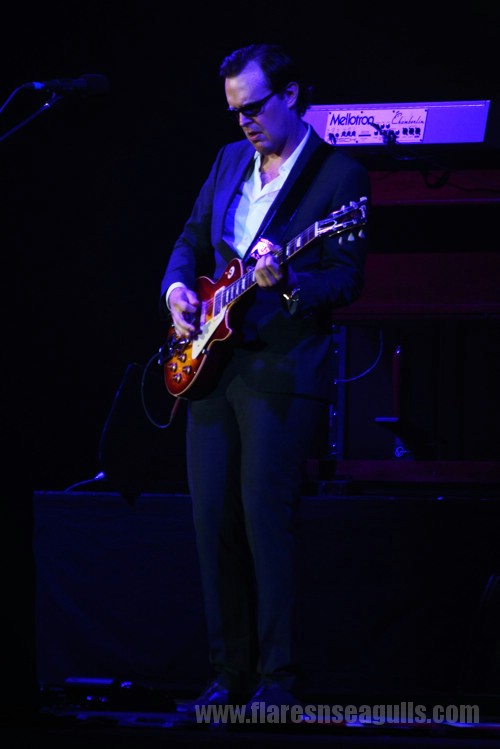 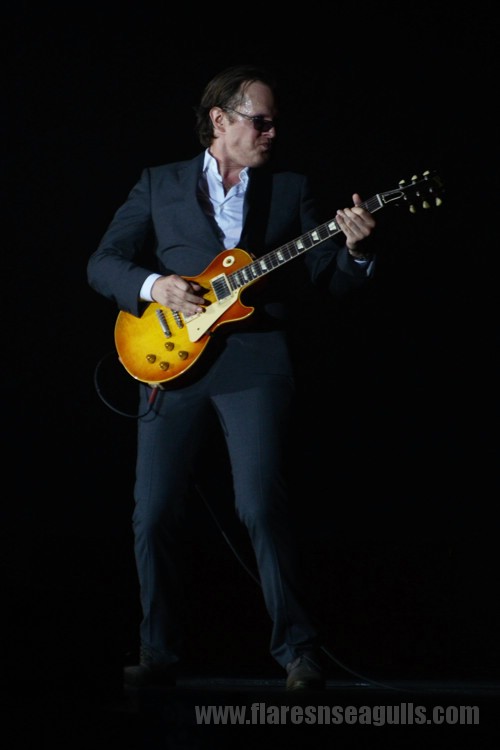