Wild West was the dress theme for the weekend and the folk from near and far who came to the fourth annual  Joctoberfest took it to heart. 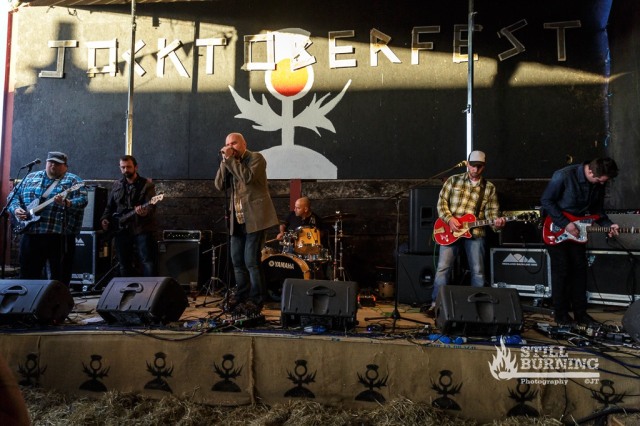 Held at the Black Isle Brewery, everything was close by, camping and parking were a short walk away and the venue itself was a series of barns around a central open air space. There were lots of straw bales and barrels scattered about to serve as seating and tables. Later on, they lit Swedish fire torches which were a source of light and heat for those early September evenings.

It all kicked off the Friday evening, with a few bands, beer and food enough to entertain those who’d arrived for the full event. Saturday was a full day of music and was by far the busiest of the two days.

and Cowboys and Native Americans…

There were dancing Saloon folk… 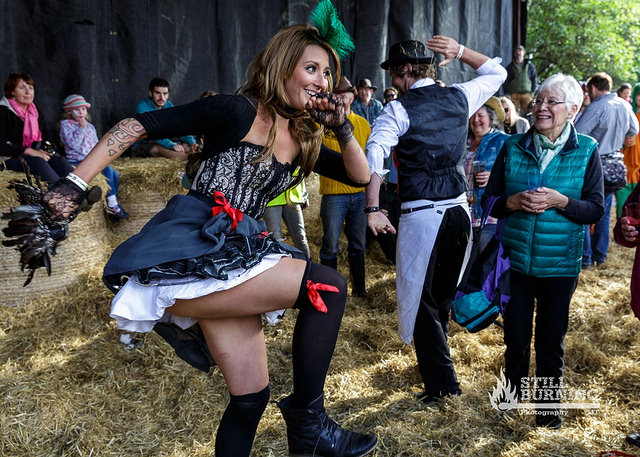 and there was straw – in the barns. Lots of straw. Maybe too much straw at times.

There were even tigers. Um. In the Wild West? As you can probably tell, there were things for the kids (and any grown-ups who wanted to join in the fun) – including face painting.

There was also lots of fun and lots of music, and there was even a bit of Strip the Willlow.

On the Friday night we were treated to local heroes Tweed, The Whiskys and Lionel, who played the main stage, located in an open sided barn. Whatever the weather, the show would go on but we were in luck this weekend, with the only rain being overnight.

Lionel, kicked off the evening nicely. 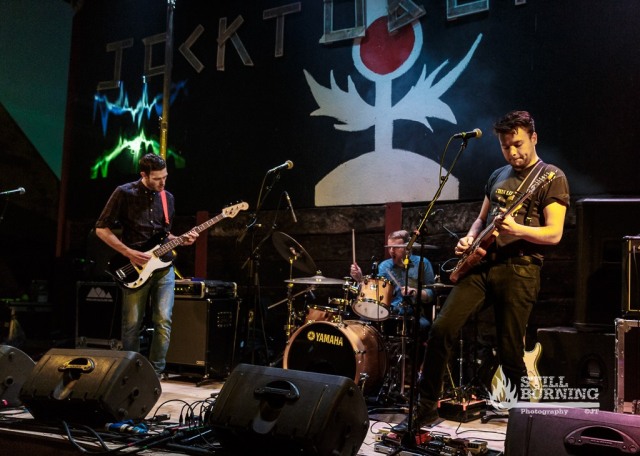 Dancing to The Whiskys,

and then Tweed – ship ahoy! 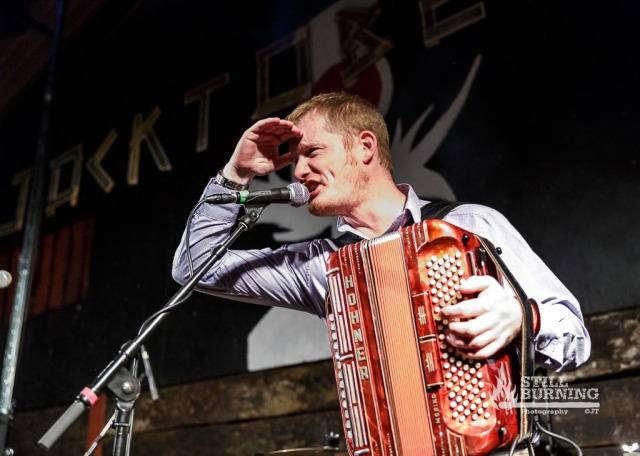 Music aside – you do seem to get hungry more often in the open air after all – there was a pig on a spit which was served up in buns later on and there were other vans proving burgers, pizza or fish and chips and a nice big bar in one of the barns kept everyone well supplied with liquid refreshments.

We stumbled off to bed quite replete and happy that night. However, I’ll warn you now, it got pretty cold so we didn’t get the best of nights sleep. We’d stupidly come with our summer camping stuff, forgetting the nights got chillier at this time of year. Oh well. We’ll certainly remember next time.

Ok, let’s talk about that topic everyone wants to know about – but no-0ne really likes – at festivals. The basic facilities. There were plenty of portable toilets and they were pretty good actually – not scary to go into at all. No showers, but then we were only there for one night.

There was a food van parked up by the camping field which served bacon rolls and other breakfast munchies before the venue opened and close by was the brewery shop, if you wanted some goodies from there to take home.

Come lunchtime they opened up and we could all head back into the venue for more music. We didn’t see all the bands as there was a certain amount of overlap and we also needed to eat and circulate sometimes. but we did catch most of the Dutch Barn (main) stage and a fair few of the Hayloft Stage acts.

We were a bit slow getting going (packing up the camp for starters), so missed the kick off by Autumn Sun, however we were waiting when the excellent  Delta Mainline took to the stage…

and then we had a wander to check out the kiddies area before the next act.

followed by another wander to get some war paint… 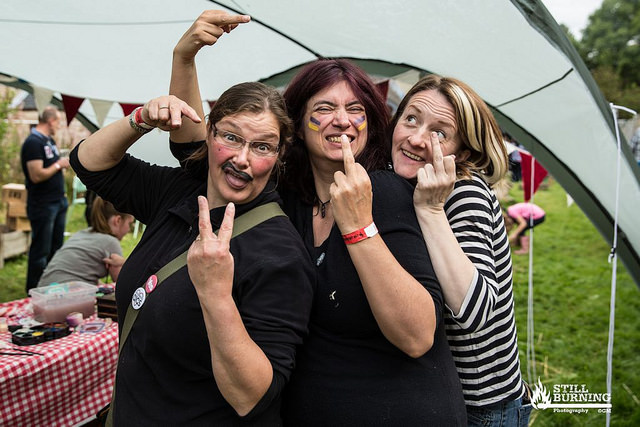 before Sara Bills and the Hasbeens came on stage.

Then we had Dorec-a-belle, who replaced the originally advertised Silver Coast at short notice…

before we finally managed to fit in one of the acts in the Hayloft acoustic stage, Gabbro…

who had a ceilidh going before the end of their set.

Then we had a real old-fashioned oompah band – all 11 of them making up Loby Dosser and the Rank Badyinz. 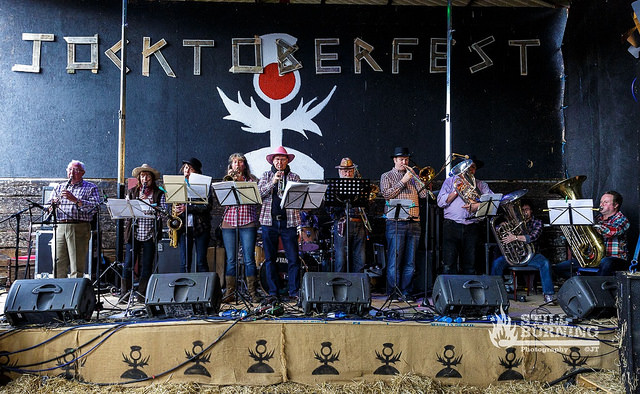 It was now about 4:30, so we went for a bite to eat and did some crowd watching. 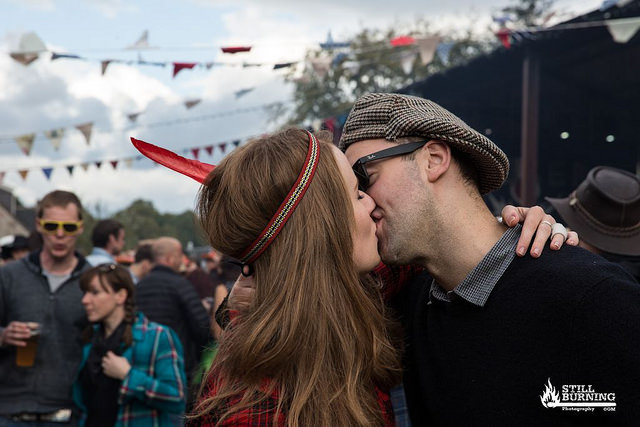 Before heading back for Ashley & the Cosmonauts. Some of the more observant might have recognised a couple of the band member as having been on stage there earlier in the afternoon. Here’s a hint for anyone wanting a clue – double bass.

Ashley had a very keen member in the audience – her wee dog. She was also struggling with a hay allergy, so well done her for keeping going.

Back to the Hayloft stage for Craig Robertson – funny stuff… 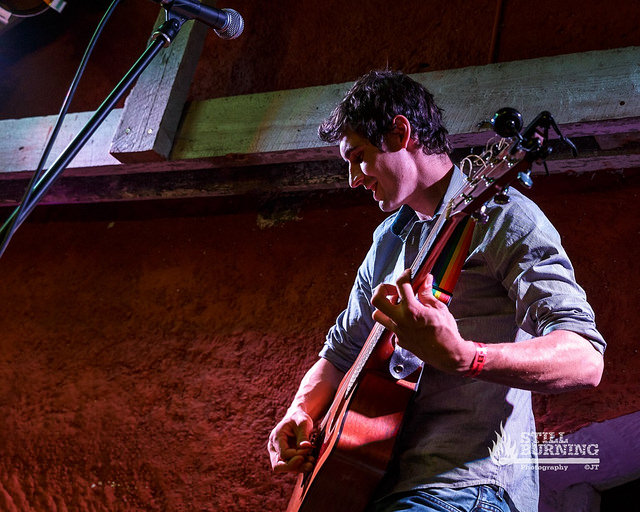 and then across the increasing busy and hard to navigate open area to the main stage for 2/3rds of Garden of Elks (as their bass player was off on tour with Paws).

Then it was time for Little Mill of Happiness… 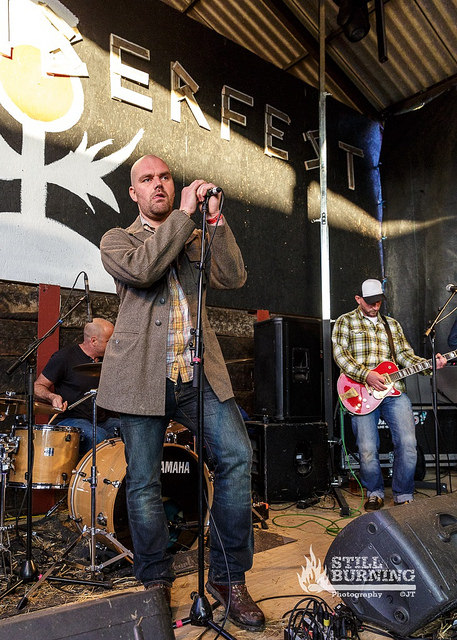 Between mainstage acts, Jamie MacDonald, of Netsounds was the very able compère… and (here he is, caught in the act) photographer.

Then it was time for Michael Cassidy on the Hayloft stage. 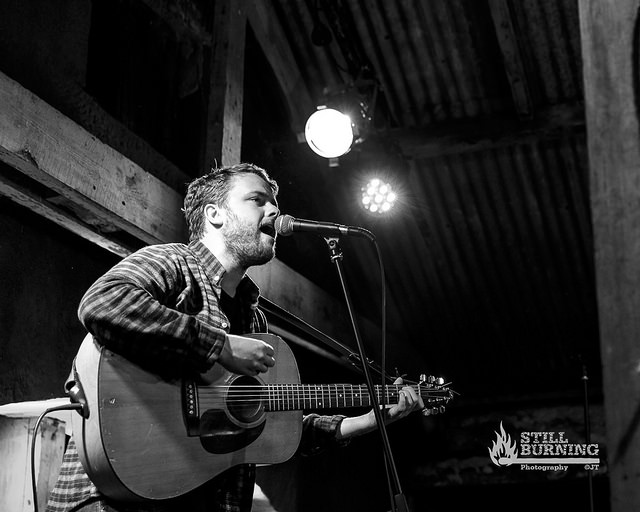 Pretty sure we were close to starving by this point – luckily there was a (now familiar!) fish and chip van located close by ready and willing to serve us. Recharged again it was onto the final stretch as the darkness began to fall. Verona… 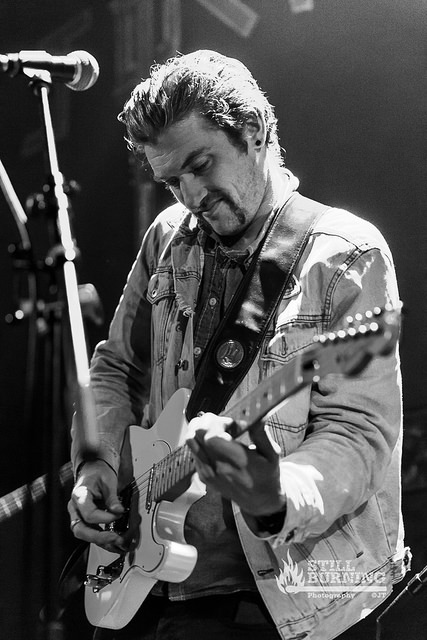 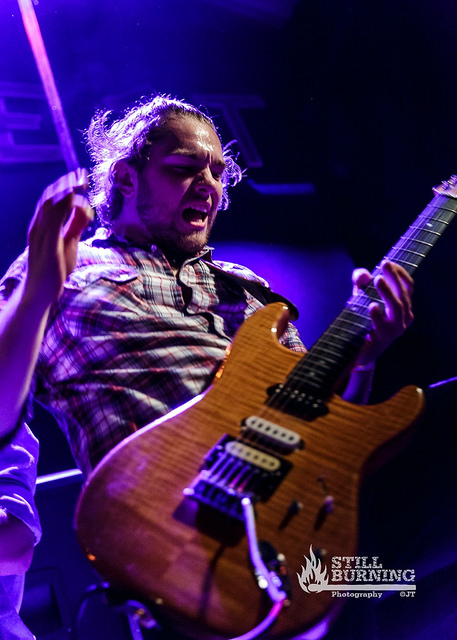 and then the very bouncy Victorian Trout Conspiracy – a name which had been intriguing me for a while now.

We didn’t stay for the last band, Hoodja, as we weren’t camping that night and so had the drive to Aberdeen ahead of us – it has been a long day after a poor nights sleep so risking a later stay wasn’t wise.

We’d had a great day, the weather had been perfect, the company great and the entertainment excellent. Well recommended for 2015 for anyone looking for an end of season festival fix. Not far from Inverness and some stunning Scottish scenery also great value at only thirty quid for the weekend. We shall return.

Words and images by Dark Secret and Still Burning.

You can view our flickr gallery of images from Jocktoberfest 2014 here.