The Glastonbury Festival of Performing Arts – an eclectic mix of acts ranging from top pop and rock groups to poetry reading, DJ’s to healing hands, clowns to chefs. It becomes the third largest town in the South West of England for a short while, with a population of around 177,500.

The festival gates opened at the usual 8am on Wednesday morning. As the car parks now open the night before, the queues tend to be on foot as opposed to blocking the local roads like in previous years. This does however make the scramble for preferred camping spots a lot more hectic. But once all set up Glastonbury gets into full swing with people relaxing, drinking, dancing, exploring and generally enjoying the atmosphere. 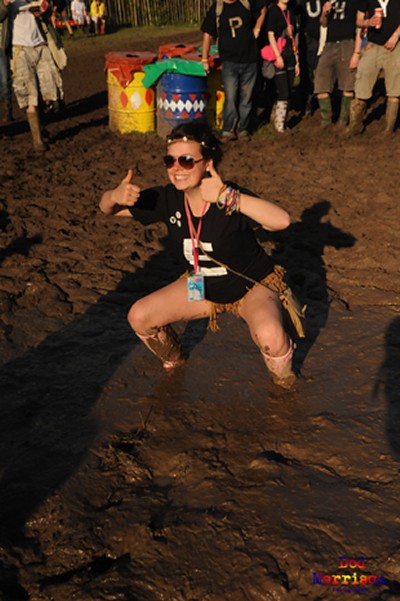 There were a few heavy rain showers as people set up camp but this didn’t dampen anyone’s spirits. The rain started up again over the next few days but by Saturday afternoon the sun came out in waves and dried everything up. It could even be said to be too hot!

A few highlights of the festival: 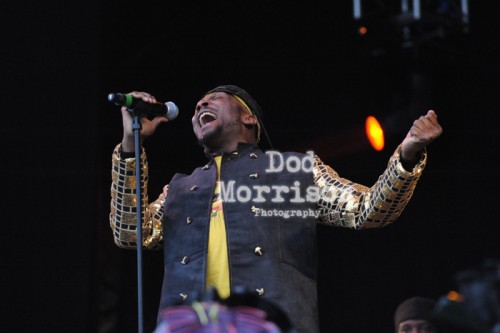 What a legend, Jimmy Cliff is the feel good reggae star. From the start he had the crowd singing and dancing along. His dance moves brought a smile to everyone’s face. He played classics including the haunting “Many Rivers to Cross”, which has been covered by over 50 artists. On this track Jimmy’s vocals make you feel emotional, that’s why this is one of the all time records to hear live. Also played was “You Can Get It If You Really Want It”. He played his old war song ‘Vietnam’ too but changed the lyrics to Afghanistan. 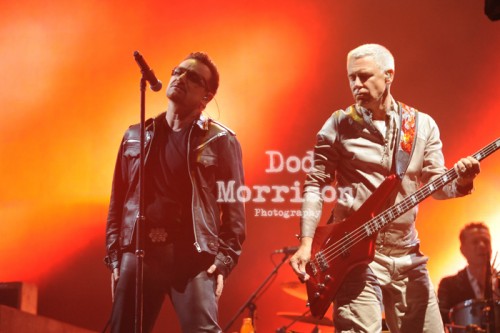 There was much apprehension with regard to U2. Some people weren’t interested, some boycotted them on purpose, and others could not wait to see a fantastic group perform. Despite the drizzle fans turned out in their tens of thousands.

U2 came on to some very strange graphics which turned out to be by the artist Damien Hurst – butterflies and larvae in various forms. I was worried that the Bono ‘preachiness’ would show itself but the only sign of anything like that was the writing shown behind the group as they performed “Even Better than the Real Thing” at the start, saying things like “look at you all, sorry I couldn’t make it last year”. After that the band belted out hit after hit with what could be described as a ‘best of’ set. The crowd had a fantastic sing-a-long to most songs, especially “Where The Streets Have No Name” and “With or Without You”. U2 proved that they are an excellent band and fantastic at live performances. I don’t think many people walked away disappointed.

A few people have scoffed at me seeing Deacon Blue when there’s so much else going on at Glastonbury. I scoff back at them, as this was one of the best performances of the weekend! I’d forgotten how many famous songs they have. Each one led into another, the crowd having a fantastic sing-a-long, really feeling part of the band. Deacon Blue themselves had most of their original line up and were obviously enjoying it immensely. A happy, fun gig.

There was obvious scepticism surrounding Beyonce.  Such a pop diva headlining Glastonbury? This just showed the diversity of the festival. It was evident how many people were looking forward to seeing her, and she put on a hell of a show. She came on stage dressed in sparkles surrounded by a white triangle on the screen behind to mimic the pyramid stage around her. Fireworks flew into the sky and she belted out “Crazy in Love” followed by “Single Ladies”. I had to leave at this point and missed the rest of the set. Some say it went downhill from there, others say she continued with a blinding show. Whichever it was I’m sure she put her all in and closed the festival with a bang.

Some people were disappointed with Paul Simon – there had been much anticipation and for many was the ‘must see’ of the weekend. Unfortunately he was suffering from a throat infection which did limit what he could do. That said he came on and in my opinion was the excellent musician we know him to be so. He played a relatively mellow set, with not many well known hits and a few from the new album. Some parts were instrumental, probably to rest his voice, but the music flowed from him and his band and it was lapped up in the blazing sunny afternoon. He finished with the ever popular “You Can Call Me Al” which had the crowd dancing along. At one point Paul Simon thanked the audience for being so forgiving, presumably because of his voice. If that was what he was like on an off day, I can’t imagine how amazing he must be on a good day! 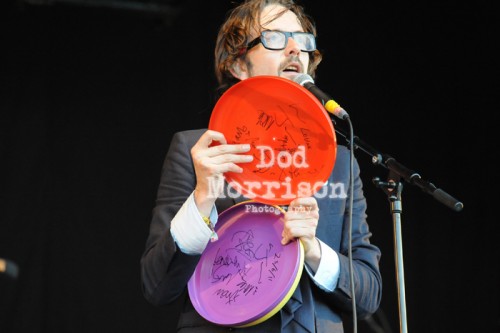 Pulp were Special Guests at the Park Stage which didn’t seem to be much of a ‘secret’ gig, as Jarvis says in the era of mobiles phones and internet  secrets are hard to keep. The area was heaving with people and even had to be closed off to prevent too much of a squash. People were watching from the slopes all around the stage, 30,000 easily in attendance.

Pulp proved themselves to be hardened festival players, talking to the crowd, cheering them on, even throwing out signed Frisbees! They played their classics, Disco 2000, Sorted for E’s and Whizz and Common People to name a few. Jarvis Cocker threw himself around the stage in his gangly way, crooning out song after song. If you missed it, you missed out.

Quite easily the best and most energetic set of the weekend. As soon as they came on MC Ben Verse is running off the stage and standing on the speakers waving his hands frantically about singing “Salt in the Wounds”. The crowd loved it and a mosh pit soon appeared. “The more you give us tonight the more we give back” he says as they hit out their drum and bass infused with rock style music at a frantic pace. 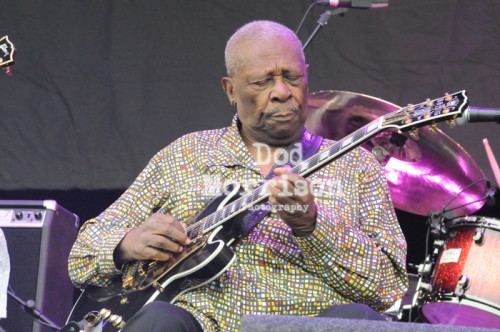 At 85 years old I am sure he must have been the oldest act to appear over the weekend. Having influenced the likes of Clapton, Hendrix and many more he played his blues like only he can, sitting centre stage, pulling some funny faces as he was in the moment.

Lee “Scratch” Perry – G Stage
At the G Stage (formerly the Glade) in a small forest part of the festival, a legend and one of my all time heroes came on in his usual get up, his jazzed up hat and boots. He made his many references to Jah whilst the band played reggae vibes in the background. “Crazy Baldhead” got an airing and a kid climbed over the barrier and danced beside Lee, who swapped hats with him and taught him some moves. For a 75 year he has energy in abundance of a man half his age. All the crowd were dancing and singing along in the mud. 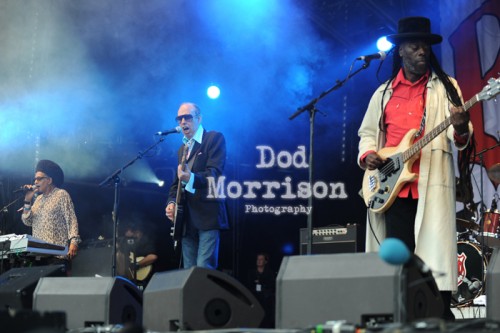 The only downside of the festival was that a senior chairman of the Conservative party and friend to the Prime Minister was found dead in the VIP toilets. It was apparently a heart attack.

Approximately 177,000 people are present on the festival site over the five days (wed to sun) this includes performers, security, stewards, and the specialist tams which puts on the show, as well as ticket holders.

The 137,000 general weekend tickets for 2011 festival were nearly sold out within 4 hours last October, with 800,000 registered to purchase tickets.

For a week Glastonbury becomes the third largest city in south west England.

More than 2000 performances take place across 4 major stages and about 15 other large ones, each with its own style and flavour. In total there are over 100 stages and performances areas.

Every year the festival donates £2 million to good causes.

The 3 main non-profit organisations supported by Glastonbury are Greenpeace, Oxfam and Wateraid. The first 2 have been linked to the festival for 19 years.

The Worthy farm herd of cows is the most productive in Somerset and the third highest in the country, yielding 11.675 kilos of milk per cow.