Eddie and the Hot Rods September 2010

Eddie and the Hot Rods, Johnny Skyscraper and Ghosts of Progress – Moorings Bar – 04/09/10 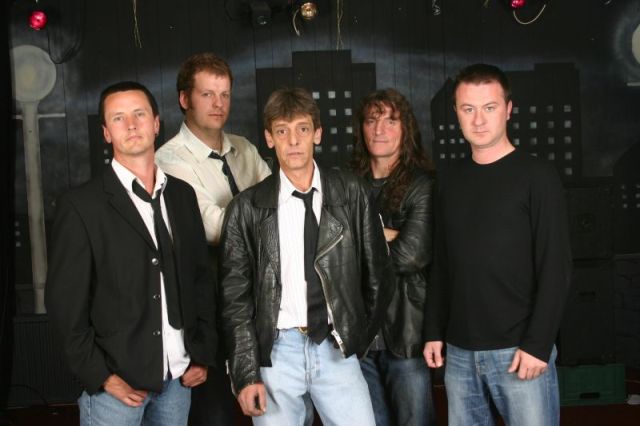 Ah yes, Eddie & The Hot Rods – the first “proper” gig I ever attended. Back then in 19 oatcake, they packed out the Capitol theatre in Union Street and turned in a supercharged performance that somehow managed to top a pair of thrilling supporting sets from the Radio Stars and Squeeze! But times change, trends change and the ever-fickle British public change with them. The Hot Rods know this only too well. Having been the “band most likely to…..” in the mid 70’s, they had their thunder well and truly stolen by their spiky-topped contemporaries in ’77 and their fortunes have arguably been in decline ever since.

The band line up has of course also changed since those heady days but the ever-present front man Barrie Masters leads his gang onstage at the Moorings Bar on this return visit to Aberdeen. It’s quickly apparent that one thing that most definitely hasn’t changed in the last 30 years is the quality of the performance. The Hot Rods can really play. Both guitarists add nimble-fingered licks and solos to the songs that enhance rather than dominate the high energy R&B – the proper type of R&B! – rockers that typify the band’s sound. Barrie himself is a revelation. Years of living the rock ‘n’ roll lifestyle have taken their toll on his boyish good looks. He’s now greying, gaunt and a little frail looking but, when he opens his mouth, his powerful voice is completely intact.

Kicking off with a 100mph Teenage Depression (sic), he announces that they’re going to be playing a selection of hit singles for our pleasure this evening. And that’s just what they proceed to do. (Almost) Everything you’d want to hear from their sterling first three albums gets an airing. Quit This Town, Hard Driving Man, Power & The Glory, Telephone Girl, I Might Be Lying, Ignore Them and inevitably THE anthem from that punk summer of 77, Do Anything You Wanna Do are all despatched note perfect and crystal clear on the Moorings sound system. Sadly, the bands pleas for people to come down the front are largely ignored apart from on a couple of occasions (the cover of The Kids Are Alright for one). In fact, apart from a cluster of middle-aged gentlemen not far from me at the busy bar who are pretty vocal in their support throughout, the Moorings crowd is sadly apathetic given the quality of the music on display. The party at one table near the dancefloor plays cards throughout! It’s not surprising therefore that, having despatched their trademark cover of Gloria as the final song, the band stride purposefully from the stage and straight out the door. There is to be no encore tonight. While I’m gutted this means I don’t get to hear Get Out Of Denver or Beginning Of The End, quite frankly, we didn’t deserve one on this poor showing from the crowd. 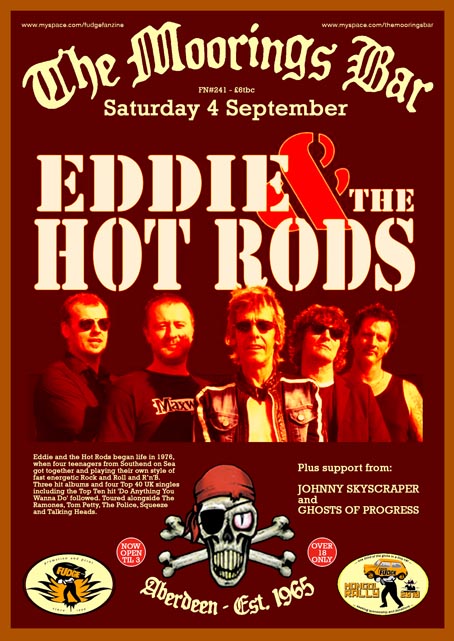 Earlier on, local punk covers act Johnny Skyscraper had fared slightly better with a wee cluster of supporters shaking their bits on the dancefloor, which makes it all the more perplexing for me and probably more galling for the Hot Rods. I’m not sure whether this mob had to leave for buses or had moved on somewhere else or were simply too pissed to stand for the main event but it was disappointing anyway.

The Johnnys for their part played their usual array of Rancid covers interspersed with the odd Cocksparrer, NOFX and Clash tune just to break things up a bit. The odd missed cue or fluffed ending is of little concern to these guys who play it strictly for laughs. They’re decent musicians too – their rousing take on East Bay Night was every bit as good as the original IMO – if a little under-rehearsed on tonight’s showing.

Surprise package of the evening for me was the opening band, Ghosts Of Progress. Hailing from Montrose, these guys describe themselves as a two man one-man-band. What this means in reality is two guitarists, one of whom does vocals and drums as well by means of a set of strategically placed foot pedals which he pumps away at continuously. The stuff they play is stripped down blues based rockers in the vein of Gomez. In fact, the singer’s vocals are a pretty close likeness to the Ian Ball/Tom Gray sound, whether by accident or design. There’s a good range of approach and tempo to their songs though and I enjoyed every one they played. In fact I was impressed enough on my first hearing of the band to buy the 4 track CD they had on sale on the night. (I’ll maybe report in here with my thoughts on that at some point in the future.) I’m already looking forward to seeing them again.

So, in short, another decent night of music, another poor Aberdeen crowd. Now where have I heard that one before??

Eddie and the Hots Rods MySpace

2 Responses to Eddie and the Hot Rods September 2010