So…… Distorted Truth? What can I tell you? A young three-piece from Clydebank who, as the eighties turned to the nineties, hawked their brand of melodic punk rock around the UK for a few years leaving behind a couple of decent LPs and at least one bona fide punk anthem (in Party Political Bullshit) before falling apart fairly acrimoniously on the back of an ill fated French tour.

So…….fast forward (unbelievably!) twenty years. The guys have put their differences behind them and faced their mid-life crises head-on. Ably augmented by Hateful’s Alex King, they’ve strapped on their guitars again for one last hurrah. Well, three last hurrahs actually as tonight’s Glasgow show will be followed by a pair of German dates next month. But first things first….. 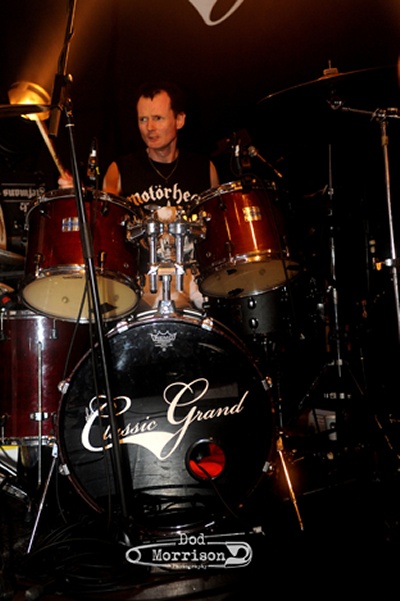 Making their comeback gig effectively in their hometown after all this time is evidently a nerve wracking move because there’s no acknowledgement of the crowd, not even eye contact, from Alshy or Davy as they set up their gear in silence. Kev and Alex look more casual about it. They’re ready quickly though and with little fuss launch straight into Counterfeit Culture, the title track from their final LP. The sound is really good with the second guitar beefing things up a bit, with Alshy’s vocals coming across load and clear. The song seems a bit rushed though, as if they’re trying just a wee bit too hard with it. Undoubtedly, the first night nerves are at play. However, there’s a great response from the crowd when it ends and there’s a tangible sense of relief that the first one is successfully out of the way, both from the fans and the band themselves.

After this, they settle right into things and the rest of the set is relaxed and bang on the money. Alsh and Davy even give us some stage moves as they attack their guitars with gusto while Alex seems to be having great fun, really enjoying a freedom he maybe doesn’t get when fronting Hateful. The energy is a two way thing though and before long there’s a wee crowd gathered stage front dancing like maniacs and punching the air as they sing along with words I bet they thought were long forgotten.

The bulk of the set is drawn from their Smashed Hits debut album and the songs sound bloody fantastic. Not too thrashy, but powerful mid-paced punk rock, big on tunes and melody. Too punky to sit comfortably on the likes of the Go For It album, too good to sit on Another Kind Of Blues, but in the same sort of ball park if you get my drift. There’s a double-hitter early in the set where they play No Trust and Life For A Life back to back and right there, right then I can’t think of any punk rock better than this. It’s raw, impassioned stuff that really gets your blood pumping.

Of course, it’s not all superlatives. Later in the set Policeman and Join The Army sound fairly generic, both lyrically and musically, although staying just the right side of average.  But for each of them, there’s a Victim Of The Law (with its upbeat reggae vibe) or a Life Goes On (with it’s poppy riffs and powerful vocals). The crowd is certainly responsive to the band. One attractive young lady mounts the stage and shows her appreciation by draping a pair of scanties over Davy’s bass while one less young chap comes up for a singalong with his arm around Alshy’s shoulders. It simply adds to the feelgood vibe of the whole evening. Great stuff. 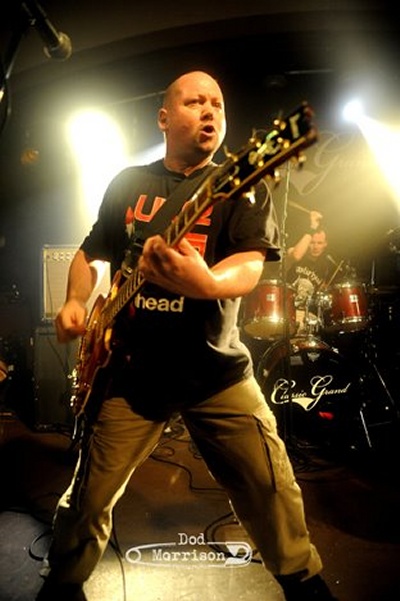 Of course, cramming a four band bill into only a four hour time slot, it’s inevitably going to be short and sweet sets from all, and all too soon the set nears its end with the announcement of DT anthem, Party Political Bullshit. I’d been listening to Distorted Truth a fair bit in advance of the gig and had an inkling to hear some of the more sophisticated songs from the second album (requests on the night fell on decidedly deaf ears I might add!) and had kinda written off PPB as overly simplistic. However, in the live setting it really comes into its own and takes on a whole different kind of power. The kind of power that only the most popular and most enduring anthems of a generation possess. The kind of power that gets every single person in a room grinning like a fool and screaming along at the top of their voices. In short, it’s a belter and I enjoyed every second.

There’s a frantic charge through their punked-up cover of Show Me The Way To Go Home to finish the set and then it’s cheerio, job done, thank you very much. The most enjoyable 40 minutes I’ve spent in ages. And the good news is that it might not be the last hurrah after all. There’s talk of a possible new EP in the offing and further gigs being booked as I type. Go check them out if one of them is near you. You won’t regret it.

I have to also give both kudos and apologies to the other bands that played.  All of them were really fucking excellent on the night, as I was repeatedly shouting drunkenly into the ear of anyone who would stand still long enough. Unfortunately, my lack of familiarity with the bands coupled with 15 hours drinking on top of only a fun-size sausage roll have rendered any hope of a meaningful review completely out of the question. So to Buzzbomb, The Snipes and, in particular, Gimp Fist (who headlined on the night), I’m sorry. I hope to see you all again sometime when I’m more in control of my faculties. Slainte! 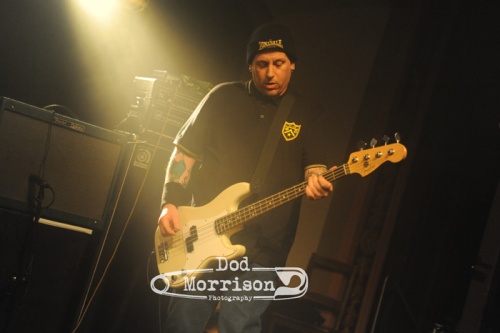 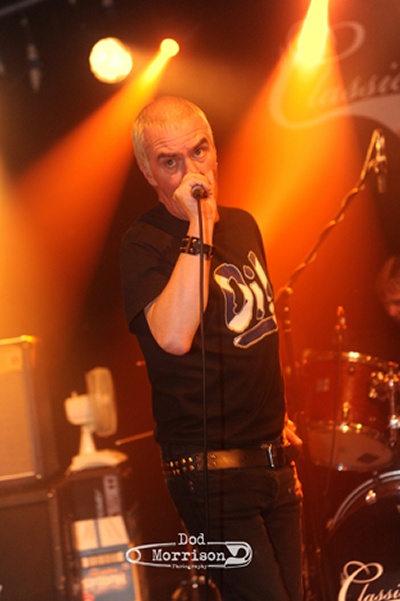