In this “ever changing world in which we live in” (sorry Paul), it’s reassuring to know that there are some things you can depend on. The changing of the seasons, the tides of the sea and, of course, the good old Moorings Bar. Here we are – another Saturday night, another bizarrely mixed bill of artists, another bargain at only £3 door tax. Perfect!

Almost. After arriving in good time to meet up with mates from down south, we discover that tonight’s opening act – Chaos Theory – have been eliminated from the bill due to a member being under-age. Should have read the small print lads. That means that first up tonight, we get the Tragic City Thieves making a return visit to the bar from Glasgow. Well, ¾ of them anyway. Due to a back injury, their bassist has been unable to make the trip north. However, rather than pull the gig at short notice, the band elect to play the show as a 3-piece.

They look as though they’ve fallen into the dressing-up box just before getting on stage, an unlikely mix of satin, fake leopardskin, business suits and smeared mascara. Not yer average indie band then. No sirree. These guys bash out punky, glam-tinged rock ‘n’ roll numbers that call to mind the likes of The Wildhearts or (the better bits of) Motley Crue, high on energy, big on hooks and delivered with panache. They can all play a bit too. Frontman CJ kicks and jumps his way through the set, wrenching the riffs from his Telecaster as he belts out the lyrics. The skinny wee drummer (with gaffer-taped nipples a la Wendy O’Williams) comes across as the archetypal Ritalin kiddie – wind him up and watch him go – as he thrashes around his kit in a blur, never missing a beat. Meanwhile guitarist Stuart (the be-suited one) brings an air of calm to the proceedings but shows that he can solo with the best of them.

There’s a couple of points in their set where I became aware of the lack of bass but, for the main part, I think they carried it off pretty well. The quality of songs and the energy of the delivery pulled them though. It may have affected them more psychologically because my mates from Glasgow thought it was a very subdued performance by their normal standards. If that’s the case, I’d like to see them again sometime when they’re firing on all cylinders just to see what they’re really capable of. The warm response they were getting suggests they’ve gained a few fans up here so hopefully it won’t be too long before they return.

Next up are the Brothel Corpse Trio who are launching their debut album tonight. They’ve obviously taken quite a few of their followers along with them as the dancefloor area fills up quite a bit. As their name suggests, they’re normally a three-piece who play catchy horror-themed punkabilly. Tonight however, they’ve got a couple of mates on stage with them, taking position centre stage and chipping in with the odd backing vocal on occasion. For the main part though, they contribute very little – in particular the smaller guy who just spent the entire set standing there like a lemon nodding his head incessantly. Not the trio’s most inspired idea.

They blast through their set with plenty of energy though drawing on most of the tracks from the new album. Singer / guitarist Phil looks cool as fuck with his low slung guitar as he belts out the lyrics about zombies and hookers (and sometimes even zombie hookers!) in a voice that sounds uncannily like Wreckless Eric. Squidy, as ever, is goofing about as he plucks away at his upright bass and chucking in the whoah-oh backing vocals on cue. Always a winner in my book. Their best tunes – Bringing Back The Dead, It’s Alright and the classic Do Zombies Have Feelings Too? – stand out as usual, and they do a great romp through the Trashmen’s Surfing Bird, but their sound isn’t the greatest tonight for some reason and the other songs start to blend together a bit. In particular, Phil’s guitar is sounding really monotone and worse, emitting a really loud buzz when it’s supposed to be muted, which spoils the stop-start effect in some of their songs. So, not their best gig I’ve seen by them, but they seemed to go down well enough and I’m sure that they managed to sell quite a few albums on the night.

By this time The Moorings is pretty packed and I have to fight my way to the door to take a phone call. On my way, I spot a Han Solo lookalike and another girl in a very loose approximation of a Chewbacca outfit – no doubt inspired by tonight’s headline act, Darth Elvis & The Tattoine Trio. After what seems like an age, a fanfare rings out over the PA, the crowd parts and three figures make their way to the stage. The one wearing a cloak and hood picks up the guitar, the one in the Boba Fett outfit picks up the bass and surprisingly the one wearing the full set of white stormtrooper armour takes his place behind the drum kit. The Moorings erupts as further down the bar, dressed in a white, sequined jumpsuit, the familiar gold aviator shades and the black cloak of a Sith, the man himself, Darth Elvis makes his entrance. 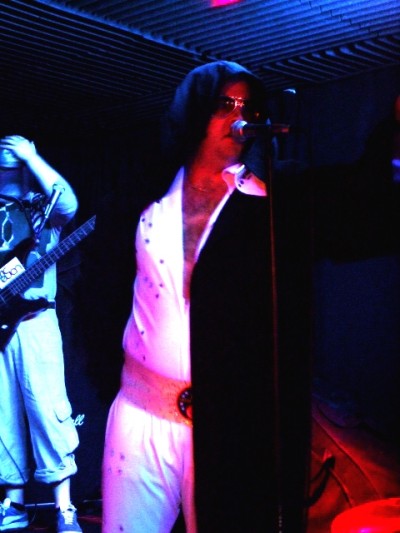 “Hell yeah” he utters in a reasonable facsimile of an Elvis drawl. “Hell yeah” bellows back the Moorings crowd, clearly well oiled by this point and up for the show. What we get next is 40 minutes of classic Elvis Presley tunes that have been Star War-ized. Hunk Of Burning Sith, You Ain’t Nothing But A Nerf Herder, A Little Less Disintegration, That’s Alright Jabba – you get the idea. All of it is played well and Darth never once lets the accent slip. Some of his song introductions are funny as hell and he works the audience like a pro during the frequent call and response sessions and the competitions to win “burgers”. As a rule, I’m not really a fan of “joke bands” but, on the whole, this was pretty well done and the set short enough to pull this off successfully, the dancefloor full and the audience singing along throughout. It was a fun conclusion to the evening and left everyone smiling at the end of the night so that can’t be bad. Obviously, a show like this will only have a limited lifespan but it’s well worth checking out Darth Elvis the once should the opportunity arise.
New York Johnny