So, to kick-off the festival season this year was the sold out Brew at the Bog – a Brewdog and Northern Roots Events sponsored music (beer and gin) festival, held at Bogbain Farm, Inverness and now into its third year. Tickets were thirty five of your hard earned pounds so great value for your day which included camping on the Friday and Saturday nights if you fancied it.

We (that’s SB & DS) weren’t sure what to expect of this event as it was a new one to us, but we were pleasantly surprised by how easy it was to find – from the A96 turn left when you get to Inverness, drive a couple of miles and you’re there – and by the compactness of the venue.

Despite a slight electrical hitch delaying entry, DS wasn’t that concerned, however this did actually annoy SB a bit at the time, we’d spent two hours getting there, in good time to see what’s what and get a bite to eat before the music started and spending 45 minutes or so in a queue due to lack of a ticketing machine was time wasted, in his humble opinion. Still, these things happen, and the weather was good and no-one seemed overly grumpy about it. It’s time that folk could have spent eating or drinking prior to the music starting though. We’re sure it will be a one-off and it won’t happen next year. The sun was shining, it was pleasantly warm, the general mood was great and we spent the time chatting to people who were arriving. By the time hunger (spurred on by some enticing aromas drifting over the area) was starting to make its presence felt, they were ready to open the gates and let us in, less than ten minutes before the music started.

So what do we have at Bogbain Farm? A field for parking and adjacent to that was a field for camping. A few minutes’ walk from each area was the site entrance. The site consisted of various buildings, forming a sort of two-sided grassy courtyard area which contained the Main Stage. Inside one of the buildings was the Barn stage. Pass through the Barn Stage to get to the Gin Stage. The Pond Stage was around the back of the main buildings – passing through and past the Brewdog bar area to get there. A row of portable toilet cubicles with hand sanitisers were close to the entrance area – and they were checked and restocked with loo roll during the day.

At my count, there were 4 different food vans/tents, a merch tent and an ice cream vendor along with various bar areas dotted about. Plentiful seating was scattered around – ranging from picnic tables, benches to hay bales and beer barrels and there was also an indoor table & chair quiet area adjacent to one of the bars.

As we said, the music began almost immediately after we arrived, so food would have to wait (see what I mean! SB) as we dashed down to the Main Stage for the first act – Searching for Donkeys who were a good kick off act for the day.

Once that had finished we crammed into the Barn Stage for King Creosote. They were having a few technical issues – there was a film, From Scotland With Love, making its debut  and was to be played on a screen behind the band during the set – but issues were resolved relatively quickly. The place was rammed with folk so we only stayed for a couple of songs to get some photos, then we got out of the way of the wheelchairs at the front so they could see properly.

We grabbed some food while we could (surprisingly good festival food actually, burgers were £4.50-£6 or so and tasted like they were proper butcher quality) so missed the start of the second main stage act. A shame really as we were pretty impressed when we had finally finished cramming the food in and went to see. The Shiverin’ Sheiks were actually pretty good – a lively, amusing bunch with a novel, white double bass playing to a chilled out audience drinking beer and eating ice-creams in the sunshine. Just perfect.

We assessed the other stages during the break between Main Stage acts. The Gin Bar was a difficult fight through the constantly rammed Barn Stage and the Pond Stage times clashed with the Main Stage. Time to make some difficult decisions… We basically gave up on the Barn Stage – to get anywhere near the front would mean missing other acts – so we decided to concentrate on the Main Stage and the Pond Stage. Between Main Stage sets we wandered the area, looking for interesting people and beer. Alcoholic drinks were purchased in exchange for a token, which were £4 each.

The Little Kicks were up next on the Main Stage – they were at the tail end of their European tour and were heading off on the train shortly afterwards – and gave their usual well received performance.

Friends in America – a lively bunch we decided we need to catch again sometime – were next followed by a spot of Casual Sex (we saw the band of the same name as well 🙂 ) – initially sans lipstick, which was soon remedied.

We split up at a couple of points during the day – DS went off to see Bronah & the Boys on the Pond Stage while SB went to the Main Stage for Randolph’s Leap (just sooo good for a light-hearted summer-y day) and DS also caught Roddy Woomble on the Pond Stage. (For me the Pond Stage seemed a bit stapled on to the rest of the site. I mean, I guess you have to work with what grounds and buildings you have but it was sad that fine tuned acts such as Roddy and Jo Mango were basically playing in a trailer `round the back`. I really don’t mean this to sound harsh but I’m an honest reviewer, I see no point in saying the garden is rosy every day of my life. Again, hopefully the BatB people will take this in the spirit its intended and not have me shot. SB.)

On the Main Stage Woodenbox were followed by Prides which DS certainly enjoyed. (I’d not seen Prides before and its not often an electronic-y band gets me interested but they did, and conjured up a front of stage atmosphere too, which ain’t easy when the sun initially just made people want to sit around. SB). Kid Canaveral had the audience singing and dancing – not just the audience either. DS found herself joining in on a few of their songs. (sorry folks! SB) This set was possibly her favourite of the day.

By the time Jo Mango were onstage there were leaks aplenty on the Pond Stage – which was starting to live up to its name.

As the darkness began to fall Admiral Fallow took to the Main Stage and they soon had the audience forgetting about the heavy rain as they danced about and sang along. 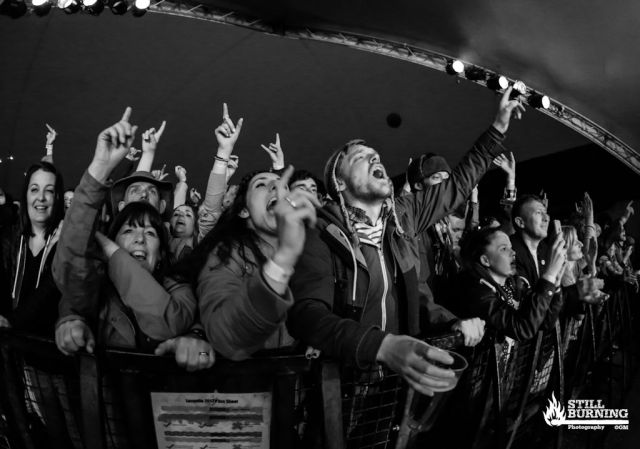 Stanley Odd rounded of a fantastic day – we’d seen them in Aberdeen a couple of days before so didn’t feel the need to stay for the full set – we had a long drive back to Aberdeen to make so slipped reluctantly away after half an hour or so.

Bring on next year!