Still Burning managed to meet up with Wickerman Festival founder Sid Ambrose to find out more about this annual event that seems to get nothing but praise from people who have attended in the past.

For our readers who have only heard or read about Wickerman Festival, can you tell us a little about the event?

The Wickerman is madly eclectic with various stages.  Festival attendees can enjoy everything from classic punk and ska through to cutting edge dance music, original Jamaican reggae and a real mixed bag on the main stage.

You also have the burning of the Wickerman at midnight on the Saturday, is this a symbolic banishing of demons or something much less exciting?

What is it like for you in the days that lead up to when the gates open?

In the early years I acted as the social lubricant for the different teams involved in the festival build up.  Much bonding took place over a pint or nine.  Nowadays it is a much more professional event with everyone knowing exactly what they should be doing.  I pitch in wherever I can but suspect I am simply getting in the way.

When does planning for the next year actually begin?

August is usually spent analysing how the previous festival went.  September is the only real slack month with plans being made for the year ahead in early October.

I’d imagine there are many, many things that you have to organise beforehand, just now how much work is there to prepare?

It is a leviathan task.  We have to consider everything from marketing strategies through to the positioning of toilets.  We strive to make sure that the festival is organised to the very best of our abilities and budget.

How many people does it take to change a light-bulb at Wickerman? Well, not just a light-bulb, more create the whole damn show?

It takes six people to change a light-bulb, one to change it and five to lure a puritan policeman into the belly of the wicker effigy.

There is a core team the whole year round that organise their own areas and over the festival weekend there are hundreds of people working on site.

Any mistakes in earlier shows that you can laugh at (or wince at) even now?

We used to have a huge communal camp fire about ten feet across.  Health and safety regulations insisted that we place a large sign next to it saying “Fire” (presumably incase nobody knew that it was real and assumed it was an artist’s interpretation of a fire).  Quite sensibly one of the customers pulled it down and flung it in the camp fire.

How do you rate yourselves alongside the likes of Rockness, as rivals, or are you happy that Scotland can put on such good outdoor events?

The small Ayrshire town of Maybole used to have graffiti which proclaimed “Second to nain” (that’s my edited version). We feel the same about Wickerman.  We may not have the finances the big boys do but feel hugely proud of our event and loyal audience.

Rockness, T in the Park, Belladrum and Loopallu are all excellent news for the Scottish music industry.

And the most up to date line up so far this year is?

We still need to announce the line-ups for the dance arena, the acoustic village and the Axis reggae tent and still have loads to announce for the main stage and scooter tent.  So far the acts we’ve announced are Ocean Colour Scene, The Futureheads, The Saw Doctors, Sons & Daughters, Codeine Velvet Club, The Undertones, Unicorn Kid, Django Django and too many more to list. Check out the Wickerman website for the rest.

Is it too late for an act to get a place in the line up? If not how do they apply?

It is a bit late in the day for band submissions.  The best way to get on at a festival is to be original and have a good profile. The best place to check out when band submissions are open is to keep an eye on the website.

What’s the public transport situation for getting to Wickerman?

Buses are the best way to get to the festival.  Trains can get you as far as Dumfries Station and after that you have to get a bus or taxi. Happy Bus will this year be running a route to and from the train station.

Happy Bus and Liftshare, what are they all about?

Happy Bus and Liftshare are a good way to get to the festival.  Happy Bus leaves from various city destinations and Liftshare is what the name suggests.  Information on both can be found on the Wickerman website.

I’d have guessed that Yurts and Squrts were a sexual act until I read about them on your site. Nae cheap are they?

Yurts and Squrts could also be mistaken for some type of amoebic dysentery but it is a very good name in that people remember it.

In terms of prices we get a huge social spectrum at the festival from the fiscally challenged in ten pound tents through to the well heeled who don’t mind paying a bit extra for luxury camping.

What three things that I MUST HAVE in my rucksack?

1) Wet wipes incase you get wet or need a wipe.
2) An instant meal, my suggestion would be prawn cocktail crisps as a starter and beef or chicken flavour for the main course.
3) An article of clothing to make you look debonair, I would suggest a cravat, flannels or even a pair of Oxford brogues.

What sort of age group do you attract? And how have attendances been numberwise? Would you like to get busier or is there a number when it all suits the venue better?

We attract an all ages crowd.  Families, students, couples and groups of mates make the weekend a real melting pot of people.

We have an audience of around 15,000 although the site could take another 5,000 if we wanted to expand.

The Scooter Tent, what sort of numbers can you get in there?

The scooter tent has a capacity of 1,800 but beware of eye injuries from those spiked Mohicans.

Ok, acts. Any bands or artists that you’ve tried to get to perform at Wickerman but have so far yet to persuade?

Tried to get The Doors but the spirit medium couldn’t get a hold of Jim Morrison.

And your favourites over the years, both crowdwise and your own personal faves?

My favourites over the years have got to have been Utah Saints, Dreadzone and The Selector.
Audience favourites have been Fun Lovin Criminals, Gary Numan, Annie Nightingale, Bad Manners and the majority of our headliners.

Home straight now Sid, want to give us a couple of amusing stories from previous festivals?

The original meeting with the police was amusing in retrospect.  When asked what the festival was about I replied “It celebrates a cult horror movie where an erm… policeman was burned to death in a giant wicker man”. To make matters worse the police liason officer was Ian Howie, who of course shares the same surname as Edward Woodward’s character Sergeant Howie in the film.

Any bands that just “rocked the fucking house” and possibly surprised everyone when they played?

Probably Gary Numan.  People were surprised at the choice but once he came on stage he really rocked. He played a 30 minute encore!

You get one sentence to tell our readers why they should come to Wickerman this year (apart from seeing the Undertones 🙂 ) and it is…..?

Fun, fire, frolics and a famously friendly fraternity of folk.

Your favourite flavour of crisps?

Favourite crisps are salt and vinegar.  In general crisps are made from a root vegetable so I try to eat five packets a day to ensure my five a day allowance of vegetable matter.

Well thanks for your time Sid and hopefully the weather will shine for you this year! Thanks also to the lovely Caroline McCleary for setting up this interview.   Still Burning 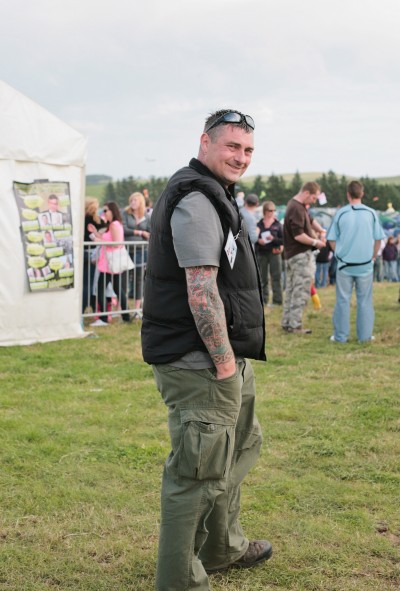