Ermm first 6 months – awesome. Next 5 – not so awesome. Dec – will be Mega. So yeah rollercoaster year… but we’re still here… just!

When and how did you form?

We formed in 2007. We started as a 4 piece – Me on Bass & Lead Vox, Chris Rogie – Lead Guitar, Lewis Young on Drums and Greg Nicholson on Bass. Since then we have had a few line up changes, most notably Nick Crowther on Bass guitar which enabled me to focus on lead vocals and take over from Greg on rhythm guitar. Its been that line up (Chris, Lewis, Nick and I) for the best part of 18 months. However that may change soon. 200+ gigs later we’re still here!

Where does the name Kashmir Red come from?

Its one of my favourite Led Zep songs and Red is for Aberdeen FC – pretty dull when you break it down but we liked it and stuck with it after many different suggestions.

Who would you class as inspiration?

Oasis. Without them I doubt I would have even bothered with the guitar – saying that I have been singing for as long as i can remember. All of us also have much love for Neil Young and Ryan Adams. I’d say Neil Young and John Lennon are my two main inspirations. I find Neil Young’s lyrics (for the most part) amazing, I’m very much a lyrics person.

How does your writing process work? Is it a band effort?

It usually starts with Chris and I sitting down with the acoustics and working out something from there. Then we tend to bring it to the band and give them the ideas how we want it to sound. Neither of us write music or anything like that so sometimes it takes longer than anticipated to get across. Saying that the past 2-3 months I think we have written some of our best stuff which is a far cry from what we have done. I have never felt we have really captured the sound I am looking for yet – but I do feel we’re getting there, I think we have a far greater idea now of where we are going opposed to our previous recordings.

Whats been your highlight of 2009?

I think the gig we performed at the O2 Academy in Glasgow in Feb of this year was the highlight to me. We were extremely well rehearsed and just felt we nailed every song, I remember coming off thinking we had really cracked it that night. Headlining the Beach Ballroom – Live At The Beach in August was also a highlight however I would say the Glasgow gig stood out more. 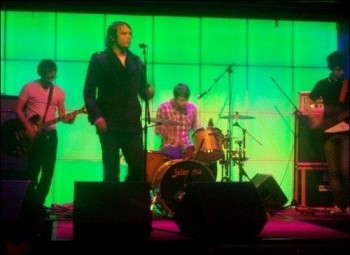 And the highlight of your career so far?

Would have to be the Montrose Music Festival in 2008. It was the first ever Music Festival in Montrose and we had no idea what to expect. A fair squad of us went down on the train at 1pm that afternoon and we were on stage at 6pm. As I said we had no idea what to expect and when we arrived in Montrose it was buzzing. The whole town was out, blazing sunshine and when we arrived at the Ash Bar it was packed to the rafters. The equipment wasn’t the best and if I remember correctly it was Nicks first gig. When we got on stage the place was rocking. I have never seen a venue so packed and into one of our gigs. When we finished with My Generation I thought the roof was gonna come off. I love Montrose..its my fav place to play.
Also playing the Wizard Festival that year was a major highlight.

Do you find TV programmes (such as T4 Unsigned) a good way for a band to get into the industry?

Yes and No. We have tried to enter it, and did make a semi push for it, however it was all in vein. I personally think all these shows (X-Factor, BGT, T4) are all fixed. Saying that I quite liked that guy Tommy Reilly who won it last year and he may not have been given the same opportunity if it wasnt for the show. Its the judges who bug me.

Whats your favourite local venue to play at? And attend as a punter?

Probably Cafe Drummonds as a full band, however if I am playing solo i prefer Tunnels 1. I think the sound in Tunnels one acoustically is brilliant, however the atmosphere in Cafe Drummonds on a Saturday night can’t be beaten. You get all sorts floating about with Red Stripe.

Do you think the music scene in Aberdeen is strong at the moment?

It’s steady. There is still not one band who stand out of the norm and have gained much national exposure. Bands such Copy Haho (Stonehaven), Cast Of The Capital and Indian Red Lopez do quite well though from what I read. The Little Kicks stand out to me but again as of yet they are yet to get their big break through – I think their album is brilliant and they deserve a break. 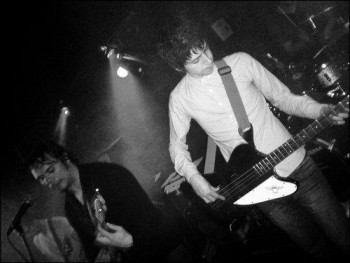 What is your favourite song in your setlist? Personal and crowd favourite?

I think my favourite to play is a song called August Paths as it means alot to me as it was written about our drummer and I so i do like playing that. The crowd seem to like Kings & Queens which is upbeat and can usually generate some action within the crowd.

Any bands to look out for – locally and nationally?

I went to see the Tijuana Sun on Saturday night and thought they were brilliant. I have seen them on numerous occasions but i feel this was there best yet. I didn’t know how they would cross from a 3 piece to a full band but it has worked out really well and the tunes have kept there sincerity but at the same time become really rocking, aided by a fantastic drummer.
As I said other local bands i know and enjoy are The Little Kicks, Ten Easy Wishes (if they are still going), Toy, 5:15, Amber Wilson is brilliant…there is a many out there if you give them a chance.
Nationally – eh…hasn’t been a band in a long time which has taken my fancy I’m afraid.

Which song do you wish you had written?

While My Guitar Gentle Weeps – The Beatles

Hopefully an EP – but to be fair we have been threatening that for years. More festival appearances and branching out even more across the UK. We have played London but don’t think we really got a fair crack at it last time, we have unfinished business I feel down there.

If you Kashmir Red were a cartoon character which one would you be and why?

And finally, whats your favourite flavour of crisps?

Yeah…  come check us out at a gig in the up coming weeks.

Have a great xmas and we shall see you all soon.
steven. x

Thanks for your time Steve, and good luck for the future. lazygun