After seeing them as the main support to The Godfathers a couple of weeks ago Still Burning caught up with The City Rises drummer Melanie McKay to find out a bit more about them. Philosophy, Carla Azar and Galleries of Helsinki… it’s all here! 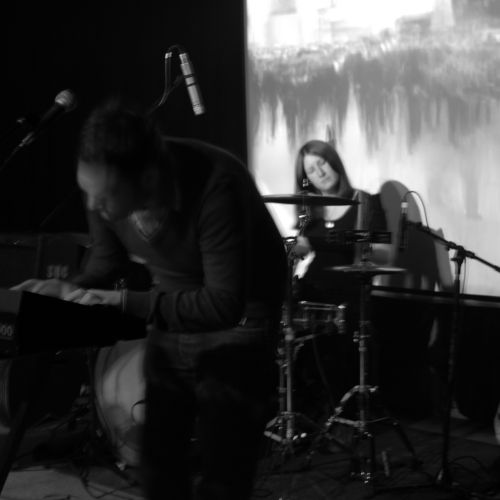 Hello there, all is good with me. .

…and how is life in the camp thats is The City Rises at the moment?

The City Rises are doing just fine, getting geared up for our regular friday night practice. We are seeking to fine tune some tracks you see.

You’ve just played a couple of gigs in Edinburgh and Glasgow, how did they go?

Both gigs went well I think, speaking personally though I enjoyed the Glasgow gig the most. We played a small cafe/venue called Rio… the nature of the venue and the general atmosphere seemed to fit .I thought the acoustics were excellent, the drums werent miked up but the sound seemed to carry very well and I felt like I could hear everything that was going on which is always a bonus! haha

I’m not going to lie to you, I’d never heard of you before I saw you supporting The Godfathers at The Warehouse. A terribly small crowd on the night but a good support slot to get all the same?

I suppose we have been a bit low-key on the promotion side of things… we have been pretty focussed on getting the songs together and in a sense we are quite “new” in terms of the existing lineup. We felt it was a good slot to get… quite exciting in a way. I am happy to have as much gig experience as possible as I am quite new to performing.

Want to give us a brief history of the band?

The band have been in existence since 1997, they did have a few gigs around that time both here and around the UK. When the drummer from 97 ish left they looked for a new drummer as they wanted to try a slightly different approach. Thats when I got involved. Which was last year August.

The City Rises. Whats the name about?

Ooh its really arty SB !  The City Rises is a painting by  Umberto Boccioni ..he was an italian futurist !  Within that school of thought was the idea of general hard graft in order to achieve some kind of progress /development!. The band The City Rises believe in  that too !

Your sound is far from unique but you wear it well as they say. Who would you say your biggest influences were? Obvious or otherwise!

I would say we are all into electronic music in one form or another and that does come across… big influences would be post – punk in general along with The Fall, early Simple Minds, Elliott Smith and Air.

Does being unusual (for this neck of the woods) work for or against you when it comes to getting local gigs?

I think the answer to that lies somewhere in the middle ground, I don’t perceive it as being difficult to get a gig at all. I do think it depends on the promoters though and what their priorities are… do they seek to promote bands that are in harmony with their musical vision for the venue or is it about financial gain chosing  bands that are guaranteed to bring in a decent crowd. I don’t think there is any straightforward answer.

I think Across the Light was my favourite song of yours, what would you say was your strongest track? And why?

I think for me it is Galleries of Helsinki, it was the first song we tackled when I met with the guys for the initial practice, so maybe I like it for that reason. Its faster than the others and maybe it puts me though my paces more. Although my drumming is quite minimal in a sense.

I personally prefer your style of music with vocals, what does the band prefer? Although, without can still be uplifting of course!

I think we all like the vocal element to be present. But I also appreciate a lot of music that is lyric free. The band Tortoise comes to mind. Their music is just sublime.

Any plans to sit down in a recording studio at any point?

Yes we will be recording a couple of tracks in June.

How do you create your material? What forms the basis of each track, before the other instruments get added?

The basis for each track is either the korg or bass/guitar, that is normally the starting point. There will be a melody of some sort… or a sequence of chords and we build on that.

Where would you like to be at say, in a years time with The City Rises?

I would like to have done some kind of different event such as a festival or going the opposite way a very small venue or two. I would like branch out a bit with the percussion as well.

Any more gigs lined up?

We have some plans to maybe play in Dundee but we have nothing booked at the moment as we want to focus on new material and the recording. 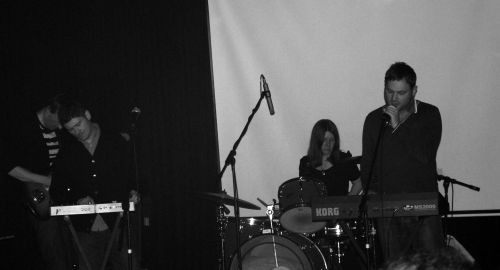 And now to yourself, Melanie the Drummer 🙂

Not too many female drummers around is there?

No there doesn’t seem to be. Which I find unusual. Come on ladies , don’t be afraid to try something new that involves making a lot of noise..!

How did you get into drumming in the first place?

I think it all started in early primary school, I used to enjoy playing percussion instruments. A few  years back I came across an evening class at Aberdeen College which was an introductory course..so I signed up. The teacher was encouraging and that’s how it all started.

Was the likes of Meg White any sort of inspiration? Any drummers you admire?

Not long after I began exploring the drums I saw a White Stripes live gig on the TV and felt a lot of admiration., Because female drummers are in the minority I suppose it is natural to look to the women that are up there already and have a degree of success. I would say I am inspired more by Carla Azar from the band Autolux and Sam Fogarino of Interpol… just really like their drumming style.

Do we expect Mel on vocals at any point?

I don’t think so, but I don’t like to rule anything out.

I believe you have a vested interest in philosophy?

My educational background is in philosophy. I’m very interested in moral philosophy and thought that relates to personal development in general such as the work of Kierkegaard.

Does that go side by side with your love of music?

Now you have asked that I wonder if that may have an influence on the kind of music I love. I do feel that the music we love gives us some kind of knowledge and personal insight. I’m a big fan of music that I feel transports me and raises my level of aesthetic pleasure, bands like Love, Codeine, Mogwai, Low and My Bloody Valentine are good for delivering that!  Playing in a band also involves a level of commitment and belief in what you are doing so I’m sure my background in philosophy has some part to play in all that.

Cheese and Onion …of the Kettle chip variety.

Many thanks for this Melanie and remember to keep us up to date with future gigs and the recordings. Still Burning. 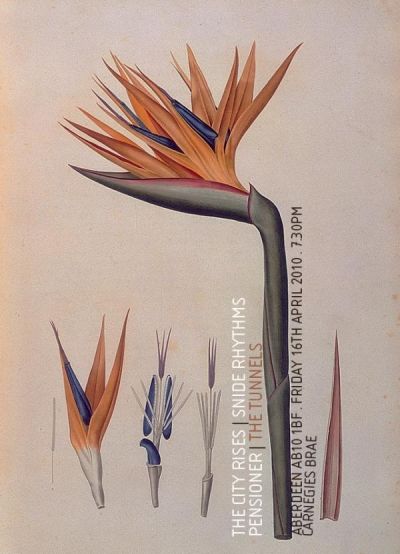