What’s the story behind the band name?

Roz:  We all miss something, don’t we?

How and when did Miss The Occupier get together?

Roz: A mutual love of the Pixies and cider, with some influence from our mutual pal Dirty Marc…

Roz – you have a very striking, unique look! What made you go for such a dramatic, eye-catching image?

Thank you! I love fashion, style and drama. I think performance is 50% audio, 50% visuals and charisma, and if you want to stand out, then i think it is important to look different. and i’m a little self-obsessed!

For anyone who hasn’t heard of Miss The Occupier yet – describe your sound.

Roz: Like coming home one night to find your house has been burgled but they’ve left the bottle of champagne you’ve been saving…

Do you have any particular musical influences (obvious or otherwise)?

lone: Anything with a beat.

Are there any particular songs that you like to ‘cover’ when you’re touring?

Roz: we’ve done a few – a good rendition of Le Tigre’s Deceptacon for Ladyfest Manchester  and for Radio 1, we did The Waitresses ‘Xmas Wrapping’ live on Vic Galloway’s show. Not an easy choice, we discovered, but  we think the hard work paid off in the end!

lone: Don’t forget These Boots Are Made For Walking when we played in Shetland. Or was it Frankly Mr Shankly? I can’t remember exactly – was too busy wooing the audience.

If so, what sort of reaction do you get from the crowds? Is it so hard to get people looking good on the dancefloor?

What has been your most memorable gig to date, and why?

Roz: I loved supporting Bis at King Tut’s, the crowd were amazing; and headlining the Smiths tribute night to a sold out King Tut’s was also immense! Pretending to be Morrissey left me feeling all warm inside!!

lone: I wasn’t a very convincing Mike Joyce, I’m afraid. Didn’t even pursue legal action once, although that might have been a bit rough – it was a charity gig.  Wickerman is still most memorable for me. It was only my fourth or fifth gig with the band and I was at one of the main festivals in Scotland. That was a bit of a rush.

At the moment, you’re still ‘unsigned’. What difficulties have you come across in trying to get your name out there?

Obviously the internet is unsigned bands’ saviour, and through our mysace we have had records put out, gigs booked and loads of fans hearing us. it’s always difficult to play new towns and get a crowd, but we think we’ve made some good choices and it usually works out. only once have we travelled for a gig and played to 5 people!

What motivates you all to keep going?

Roz: Money… only kidding! Boys?! No, we get along well, enjoy spending time together, love the music, love meeting new people and get a buzz from playing. That’s what it’s about for us.

lone:  Maybe it’s because I’ve started and see no reason to stop.

You played at The Moorings in December last year and Cafe Drummond in January this year. What do Miss The Occupier think about the venues in Aberdeen?

Magnus: We’ve got various connections with Aberdeen. The Moorings Bar is my favourite venue ever.

You’ve supported The Fall in the past, how was that gig and do we assume you’re an admirer of their work?

Magnus:  The gig was really good, although we didn’t meet Smith, for various reasons that we shouldn’t go into. Someone on the Fall messageboard described us as “Hole meets Sleeper meets Transvision Vamp”.  The Real New Fall LP is the best of their recent albums.

lone: I’m definitely not the first to say this, but his book ‘Renegade’ is genuinely laugh out loud hilarious.

Roz: Obviously cos we’re Scottish we’d love to play Barrowlands, I’d like to share a stage with nick cave… wonder if i could ever do that and not be arrested afterwards?!

lone: Optimo at the Sub Club would be cool.

A packed small intimate club or a large festival stage with 000’s of people?

Roz: FESTIVAL!! show me the love!!

Any festival appearances lined up for ’10?

Roz: Not yet, but we’re going for a few…

Miss The Occupier released ‘External Male EP’ in 2007 and ‘Recovery Position’ soon followed in 2008. What can we look forward to in 2010?

Magnus: The new EP, The Heart Is Deceitful (Above All Things), is available to download now.  Remixes of the EP tracks on the way.  More writing and recording later this year.

Your thoughts on illegal downloading?

And finally, What’s your favourite flavour of crisps?

Thanks for the interview, and hopefully we’ll catch up soon 😉 DirtyLittleSecret 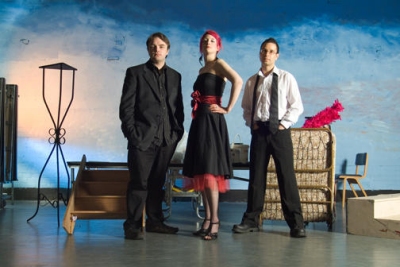 1 Response to Miss The Occupier Interview