Just as Lions.Chase.Tigers are preparing for their final show at The Tunnels in Aberdeen on Saturday night, Still Burning caught up with Fraser Sanaghan to get perhaps the final word on the band.

Hows it going Fraser… looking forward to Saturday yet?

Yeah actually. It’s going to be our last ever show so I’m sure it’ll be a bit sad for us to leave this all behind but Aberdeen’s always been one of our favourite places to play so hopefully we can end on a high.

I think the (second) last bit of news I got about yourselves was that you were actually working on your first album?

Well that was the plan. We were gearing up to do an album, we had about 4 and a half new songs in the bag and we had booked some recording time with the aim to release next year.

I did notice you’ve just supported The Futureheads, that must have been a good experience?

It was fantastic yeah, from our point of view it was one of the better gigs we’d played, performance wise anyway. We were first on the bill but the Venue was filling up nicely and there was a lot of good feedback afterwards. Everybody was happy to chat to us and buy a few CDs. Then to top it all off we got to watch the Futureheads for free and we’re all fans of the band so… what more could you ask for? Big thanks to Keren and the people at the Mill for getting us that show.

I think you’ve been on the go what… three years now, doesn’t seem that long… or does it?

It’s probably closer to four actually. We spent the best part of a year writing songs and hammering out ideas before we booked our first show. But time flies when you’re having fun so… no, doesn’t feel too long at all.

I really have to ask, why were there dots within your band name?

Haha! We get this one a lot! I don’t think any of us really have any idea where it came from. Iain came up with the name, before that there had been many horrible, horrible ideas for band names. Iain sent us all a text with Lions.Chase.Tigers in it and I think we all liked it straight away, the dots were in there then and they just kind of stuck around. Maybe he just thought it looked cooler?

As you’ve already mentioned… Saturday is your last show… why did you decide it was time to end… had you taken Lions.Chase.Tigers as far as you could?

It was quite a sudden decision really. I think for a couple of the guys it was just time to call it a day, time to move on to other things in life. Personally, I thought we could have taken things a little further. I think there may be some regret one day to be honest.

Do you have other projects planned?

Yeah actually, I’m going to fill in guitar duties for Penguins Kill Polar Bears for a little bit, you should check them out, they’re brilliant. I think Seoridh might have something lined up with another one of Scotland’s finest young bands. Iain is going to go in to the studio on his own to put down some of his ideas and Dave is getting married soon so that’ll be a whole new adventure for him.

Any favourite nights/events/times with LCT? I’m sure there were a few that remain in memory?

The guys in Make Sparks put on their own festival called Electric Bay last year which was just a lot of great bands playing on a beach on the only day of the year where the weather was incredible, was quite surreal playing to people with the sun setting over the sea. Bands, Beer, BBQ, Beach… was perfect. Equally as memorable would be Iain’s intense sunburn the day after the Electric Bay gig. Opening for Sucioperro at King Tuts in December 08 was pretty awesome too. And the two times we played ABC2 will stand out – one was our EP launch and the other was just last week, our last show in Glasgow. The crowd was just incredible both nights, singing along, all your friends and family there, great times. 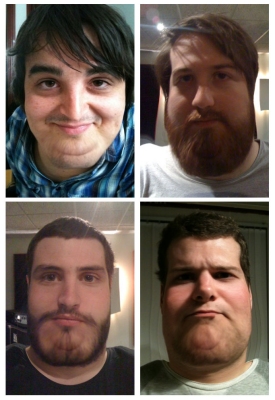 Anything you’d like to have done or achieved with LCT but somehow didn’t?

I don’t think we have ever had any delusions of grandeur, we never expected to be ‘the next big thing’ and never really wanted to be. I think we had the potential to keep doing things the way we already were but do them better. We did have quite a DIY ethic, we put out our EP ourselves, we put on a lot of the shows ourselves and played as hard as we could to try and get new people into the band. I think had we kept doing that, recorded the album and put it out ourselves, kept playing to new people, playing with bigger and better bands, learning new ways of doing things, I suppose you never know what could have been.

It’s not every band that gets a chance to say `goodbye`, I’d imagine most splits happen between shows don’t they?

That’s true. I think we’re lucky that we get on quite well together. There wasn’t any bad feelings over the split. It was more a case of ‘it’s gutting but you have to do what you have to do and I / we won’t hold you back.’ I think with a lot of other bands, ego’s would have got in the way and there would have been a lot of bickering and before you know it, people are leaving things in a bad state and you’re cancelling the rest of your shows. I think for us, Lions Chase Tigers was Dave, Seoridh, Fraser and Iain, if it wasn’t going to be those four people then it wasn’t going to happen at all. We tried once and it didn’t work out. And I think ultimately that is why we called it a day.

No doubt Saturday will be an emotional day for you all though, anything special we can look forward to?

Haha, well we’re not the most theatrical of bands, there won’t be any extended guitar solo’s, there’s no capes or glitter, nae ‘taps aff!’ We’ve always just been of the opinion that the music and the performance should speak for itself. Hopefully we just play a really great show. Playing live has always been the best part of being in the band, there’s been great gigs and horrible gigs. Hopefully Saturday is one of the very best and a few people will go home thinking ‘that was a great show’ and maybe even ‘they’ll be missed’ that would make us happy. It would be like the happy ending in the film.

Your favourite flavour of crisps?

Walkers Sensations are a favourite. We like posh crisps! Or Kettle Chips… actually, aye we’ll go with Kettle Chips, the ‘slightly salted’ ones so they go with any dip. Crisps and dip is the food of kings.

I guess just a thank you to anyone who’s reading or has shown any interest in the band, anyone who downloaded the EP or came to shows. All the incredible bands we’ve played with and good friends’ we’ve made in the process. It’s been an experience so thank you.

I think that’s all for now, I’ll see you on Saturday and I wish you all the very best of luck in the future from FnS and many thanks for the musical chapter that was Lions.Chase.Tigers.

Thanks a lot, keep up the good work. It’s always good to see somebody writing good things and giving exposure to up and coming new bands.

Thanks for that, its much appreciated. Still Burning. 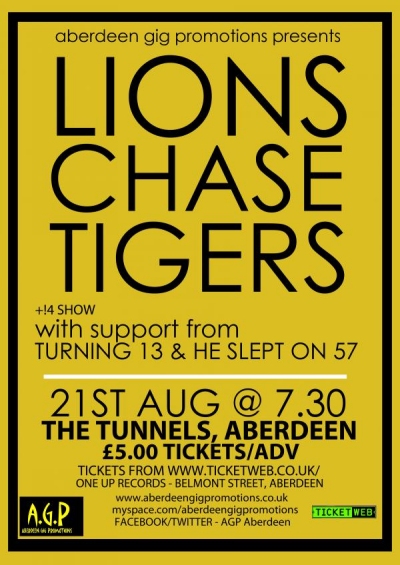