Still Burning snared John Q Public bassist just as they set off for a wee tour of Sunny Scotland.

So, first of all tell us all about John Q Public!

Hello! We’re John Q Public, a punk band from Wales who’ve dragged ourselves up from the mines of our local communities to play a rockin’ tour of Scotland with The Hostiles! We’re all roughly 22-24 years of age and we’ve been together for about 8 years. In all that time we’ve never been to Scotland though – UNTIL NOW!

Any influences, obvious or otherwise?

Our most obvious influences are bands like Bad Religion, The Offspring, Misfits, NOFX, The Aquabats and The Vandals. Sam, our vocalist, is a big fan of Sublime so I reckon they definately influence the vocal melodies he writes. He was an MC before we formed the band so I’m sure he has several other influences that I don’t know about. As a band we’re very much influnced by fast, energetic music. We like it to be fun too.

John Q Public is an unusual name, where’s it taken from?

You used to be called May Contain Nuts, why the name change?

We went under the name May Contain Nuts for 7 years. We had a lot of fun during that time and sang a lot of stupid songs – with subjects including poo, Osama Bin Laden and a cowboy with a strange festish. Anyone who’s heard our terrible debut album “Zombies and Missiles… AND FIRE!!” will know what I mean. Not everyone shared our sense of humour and as a result a lot of record labels and promoters wouldn’t work with us. Also, as time went on our songs “matured” but we couldn’t shake the reputation from our early years. In summary – we dragged the old name through the dirt and needed a fresh start.

Whats the local scene (Cardiff) like? Anyone we should be watching out for?

There are some great bands in the Cardiff scene. One of the main bands to watch out for are Dirty Revolution. They’re doing really well at the moment. They’ve just signed to Rebel Alliance (Sonic Boom Six’s label) and are sure to take the UK ska/punk scene by storm. Other bands definately worth checking out  are Detached, Colours of One, Broken Nose and our label buddies Captain Accident. They are all fantastic bands from South Wales.

You seem to have plenty gigging experience under your belts now, so whats the most important bits of advice you can offer to any up and coming bands or artists?

One thing we’ve discovered is that it’s actually better to play less gigs in your local area. I realise that sounds ridiculous but there was a time when we’d do about 5 South Wales shows in a single week. We’ve found if you do fewer shows (maybe once or twice a month) and promote the arse off them you’ll have a much better chance of getting a great turnout. It’s better to play one really, really great local show in a month than do about 10 with a crap turn out.

Obviously this doesn’t apply when you’re on tour and playing a different town every night!

And the most memorable gigs you have played?

The most memorable gigs we’ve played are probably when we get to support our heroes at a big venue. A definate highlight for us has been playing with The Misfits, a band who we’ve all been big fans of for many, many years. We’ve also been lucky enough to gig with the likes of Electric Six, The Damned, Mike Park, Sonic Boom Six and The King Blues – all bands we really look up to. Sometimes really small shows can be better though. One of our favourite gigs to play in the UK is a venue underneath a tiny tea room called Cellar Bar in Cardigan in West Wales. It’s a small venue, but it’s nice and intimate, and it’s a completely different vibe to playing to 1000+ crowds. 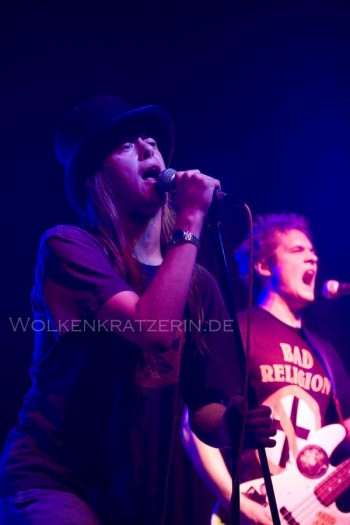 Any amusing (yet printable!) stories you can tell us from your previous gigs?

There’s so many we could tell you about, but whenever anyone asks this, I can never think of a single one! I know! There was the shambles of that skate park we played!
We were booked to play some skate park in Newport last year some time. Bit random, but we were looking forward to it! It’s always fun to play somewhere that isn’t a real music venue. We were expecting a massive cock up, and we weren’t disappointed! Basically, we got there and the band equipment was all set up overlooking a bowl. Skaters were still using the bowl, and there was less than a foot of floor space between the amps and crazy Newport skateboarders, flying around! As there was no room to set anything up, everything was miles away from everything else. We had no monitors, so we were all basically guessing at what everyone else was playing, and hoping for the best! We struggled through about 2 songs, when suddenly black smoke started pouring out of the PA speakers, right next to the drums! Being so squashed in, Nurse was stuck behind the drum kit, unable to get out! Sam had to run over and help everyone carry the speaker outside and extinguish the flame! That was the end of our set. There’s actually footage of that on our Youtube page, on our video diary “Public Access”!

Have you haven’t played Aberdeen before then?

Never! This is our first trip to Scotland. We’re very much looking forward to it though.

How did you get hooked up touring with The Hostiles?

I can’t remember how we first got in touch with them but basically we did a tour-swap. They wanted to come to Wales, we wanted to go to Scotland. So we sorted them out a few Welsh dates a few months back and now they’re returning the favour! Our vocalist, Sam also runs Go Steady Records, and helped them out with distribution on their AMAZING debut album “Always Looking Forward”! If you don’t own that already, then you really should! Available from all good online retailers! 😉

Onto your setlist now, whats your favourite songs to play?

Probably ‘One by One’ and ‘All One Riff’ as we’ve choreographed some pretty stupid dance moves to those. ‘Last Orders’ is nice to play too as it’s the easiest one on our set. It’s also always nice to play some of our faster punk rock songs like ‘The Way’ and our newest song ‘Voices of Refusal’. It’s good to get angry from time to time!

And the crowd pleasers?

‘All One Riff’ has always been a fan favourite. It depends on the crowd though I guess. When we support bands like Zebrahead and even The Hostiles I guess, songs like ‘All One Riff’ and ‘One By One’ go down a storm, but when we support heavier bands like The Misfits and Sham 69, the heavier songs really seem to get the crowds pumped up!

How do you get an idea for a song to the finished article, who does what and so on?

Generally, myself (Ryan – bass) or Sam2K (guitar) will come up with a riff. Sam (Vocals) will then come up with a melody and some lyrics. When we’ve got the basics, we’ll take it to a rehearsal room and together with Nurse (Drums), we’ll play around with it until it sounds nice and pimping!

I assume your mostly Cardiff City fans? Who’s going to win the play-off between you and Swansea for promotion? 🙂

I’m afraid to tell you that none of us even has a passing interest in football, so let’s just say… Swansea! Just to be controversial and punk rock! Haha

Will every single policeman in Wales be on duty that day?

Of course! As petty as football hooliganism is in my opinion, if one copper has his helmet nicked then it’s all been worthwhile!

You don’t know how our old pal Kevin McNaughton has been getting on then?

He’s doing great! They recently erected a statue of him, holding hands with a North Vietnamese pensioner to commemorate his contribution to ending the Vietnam War, and he has been chosen to represent Cardiff in a race around the world!

Back to the music, I see an album is on the cards for release this year?

Yes it is! Although admittedly we’ve been promising a new album every summer for the last few years but it never surfaces due to budget issues. This year though we’re actually doing it! We’re going to try and make it a mix of our more faster, serious songs (like the sort of stuff on our new ‘Voices of Refusal EP’) with some “party songs” chucked in (along the lines of older stuff like ‘One By One’ and ‘All One Riff’) to keep it fun. We’ll be recording it in my studio in the next few months and then be releasing it later in the year.

You’ve just released an EP, Voices of Refusual with the proceeds going to the Haiti fund, did you plan to release it anyway?

Nope. That EP is made up of demos of stuff we were saving for the album. It was released purely as a fundraiser! No one was meant to hear those songs yet. You can download the EP here, and pay what you like with all the funds going to the Haiti fund.

Lots of touring. I think we’re doing a full UK tour in July. We’d also like to head back to Europe this year. There’s also been talk of us going to China and USA in the past. It’d be lovely if that actually happened. Other plans include plenty of drinking and to try and get our name out to as many people as possible!

Anything else you’d like to mention to our readers?

There’s some amazing stuff coming out of South Wales at the moment if you’re in to your punk and ska. Dirty Revolution’s album is coming out in March, Broken Nose from Bridgend have just put out an album too, which sounds awesome! Captain Accident has just released his debut single, which is a sampler from his upcoming album. That’s definitely worth a listen! And also, Detached, who are a kickass ska/punk band from Newport are releasing their new EP in March! That’s tipped to be excellent. And obviously please check out our new EP ‘Voices of Refusal’ for FREE (Optional donation to the Haiti Relief Fund)!! That’s definitely enough Welsh punk and ska to get you started!

NOFX – The Decline. I could listen to that song on repeat for eternity! (Ryan)
The Cat Empire – The Chariot (Sam)
Marvin Gaye – Sexual Healing (Sam2K)
Michael Jackson – Man in the Mirror (Nurse)
Boston – More Than A Feeling (Marshall – Bus Driver)

Too many calories in crisps for me. My metabolism sucks. Prawn Cocktail snack-a-jacks are awesome though. It tastes like eating flavoured wool. (Sam – Please ignore Ryan, he’s manorexic. It’s all about Tangy Cheese Doritos and Flamin’ Hot Monster Munch!)

Thanks for your time and see you on Saturday! Still Burning.