Coming to Aberdeen, in just over a week, is Episode #5, featuring Esperanza, The Capollos and today’s interviewees,  Pariah Soul.

So, tell us a bit about yourselves… who you are, where you come from and how did you get your band name?
We are:
Craig – Gemini who enjoys embroidery and knife crime.
Jason – Sagittarius who hangs around gymnasiums.
Johnny – Capricorn who likes to <deleted pending legal advice> at his local branch of Poundstretcher.

We’re all from Glasgow (this is the bit in family fortunes where everyone claps), the name just seemed right for us..

How long have you been playing together?
Three years

Who are your main influences, obvious or otherwise?
In a songwriting sense – lyrically – John Martyn/Joni Mitchell and the old scratchy blues guys Robert Johnson/Howlin Wolf but soundwise – definitely The Black Crowes – though Zepellin, Pearl Jam, GNR and even The Faces have influenced our sound.

What do you find the biggest challenge of being in a band? Or, what pisses you off the most?
Honestly? The scene can be very closed off if you’re not doing the ‘new thing’ and sometimes it feels as though its not what you know but who.. but maybe we’re just paranoid and we’re just not very good! We’re also rotten at twitter/facebook etc.

If you could make one thing easier for relatively small, yet progressive bands, what would it be?
Getting gigs is easy – getting good gigs and building a following is hard – it’d be nice to get a leg up based on a bands sound rather than their crowd.

Can you put into words just how damn happy you are to be playing Episode #5 on Saturday 12th March?
We couldn’t happier if we were sticking matches into Holly Willoughby’s shite!

And for the rest of 2016, are there albums, EPs, festival appearances, world tours etc on the horizon?
We’re hoping to get a new EP recorded and released soon (we’ll have our current EP available at Episode #5). 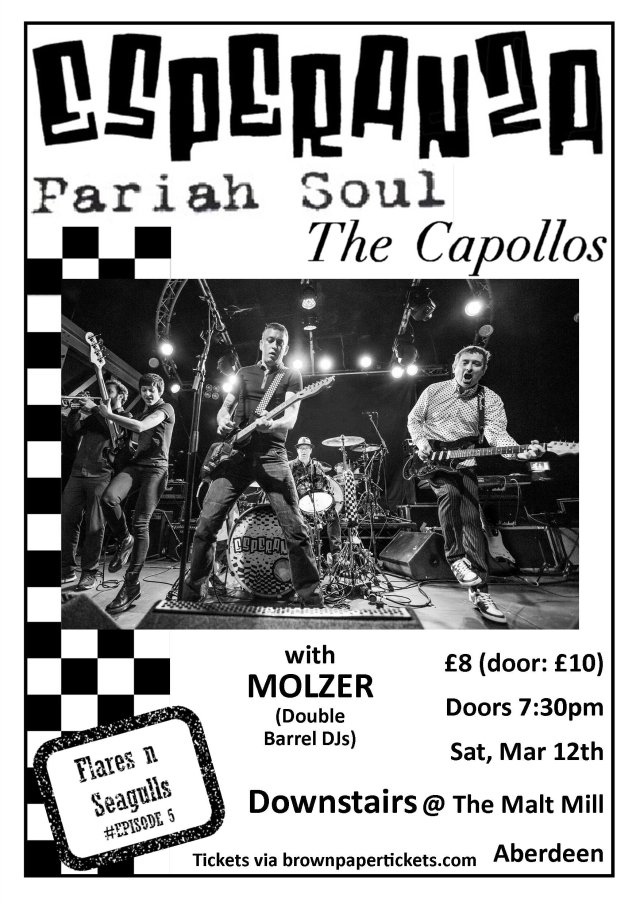 Any ambitions as a band, sensible or otherwise?
We just want to play our songs and hopefully people will enjoy hearing them – though it would be nice to play music full time (maybe one day)…

Your favourite music festivals, to play or attend?
We’ve never managed to get into the inner sanctums of festivals as a band – TITP was good but it’s got pretty obvious in terms of bookings (we’re probably just bitter).

If each band member was a film or tv show character who would they be?
Craig is obviously the orphan Annie with his curls, Jason – Ming the Merciless and Johnny would be a young Dan Akroyd.

Vinyl, cd or download?
We stream a lot just because its so easy – vinyl and cd’s are great but it’s not a patch on putting sellotape over an old Thomson twins tape and recording songs from John Peels radio show (the original Napster).

I think the current Scottish music scene is as strong as it has been for a few years, your thoughts on that?
We’ve always had a great pool of bands – we punch way above our weight in that regard.

Which bands from your manor should we keeping an eye out for? And acts from outwith your region?
We’re saying nothing in case you realise they’re all better than us! Some bands we’ve played with have went on to great things.. The Temperance Movement are deservedly getting attention.. The Struts are possibly the best live act we’ve seen.. real showmen and great tunes.

Your five (or one from each band member maybe?) desert island tracks?
Kashmir – Led Zepellin for Jason
Small Axe – Bob Marley for Craig
May You Never – John Martyn for Johnny

And finally, your favourite flavour of crisps?
Can’t have one bag of crisps! Salt n vinegar with a cheese n onion chaser.

Catch Pariah Soul at Downstairs, Aberdeen on 12th March. You can find them on Facebook and hear them on Soundcloud.