After chatting with Ryan the vocalist of Call me Ishmael at Wickerman Festival a couple of weeks ago Still Burning decided that they were well worthy of further investigation and an interview was hastily arranged and here it is. Why not catch them live for yourselves as they play Cafe Drummonds tomorrow night (Monday the 9th of August). A review of their Game of Kings EP follows the interview. 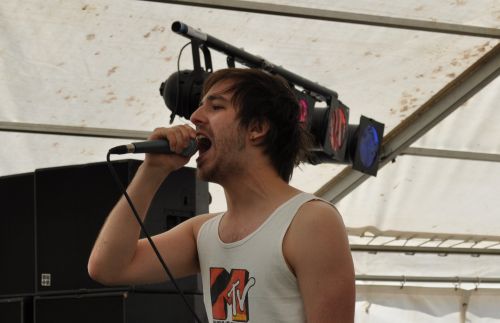 Morning Ryan. The last time I saw you was kicking off the Wickerman Festival in the Solus tent? Nae pressure eh?

Haha, yeah that was well cool to be asked to open it and was a big honour for us – i think we were one of the heavier bands playing the tent this year, so to open it and win over a hungover crowd was a challenge, but we definitely relished every minute of it….fighting through a few hangovers ourselves!

A great festival though… do you stick around to watch the rest of the bands? ?

Yeah we stuck about for the majority of the weekend, i genuinely believe the Solus tent was the place to be this year, it was teeming with excellent bands, Midnight Lion, Galleries, United Fruit, Kitty The Lion, Make Sparks etc etc, a lot of the bands playing we hadn’t heard of before so its always nice to hear cool new stuff as well!

Oh aye, it was really good fun, well the bits we remember…..and getting to watch The Wickerman film at the Wickerman festival did arouse a little chuckle! But,yeah, the bands were all spot on and the crowd was really warm and friendly, so it is definitely a festival we`d recommend to anyone.

So… your `Game of Kings` EP launch tour… how’s it been going? You’re at Drummonds on Monday night (9th of August) aren’t you?

The E.P has been going really really well, we`ve already played a capacity crowd at Cathouse on launch night, and we`ve been picking up a lot of air play across britain and in the U.S too, so with a bit of luck we`ll break the US market….but in all seriousness, it’s really nice to get such warm feedback on something that we`ve invested a lot of our time, energy and passion into.

I’m finding that “I am stop, you are go” is a mother of a catchy tune?

Haha, it’s certainly the song that seems to be assaulting people’s ears…its one of the first songs we wrote and it literally took less than 5 minutes to get the song written….so if we could just bottle that formula would be laughing! It was the song we felt was our `pop` song, but we have always tried to make all of our songs unique and stylistically different, and so far they have all been well received!

Back to basics. “Call Me Ishmael”. A Moby Dick reference? If so… why?

erm….the name came about after some horrific suggestions – godkill(?!?!) – we were on our way to the Leeds festival and i was reading Moby Dick and suggested the name. I guess thematically the name kinda ties into the music we write – a lot of our lyrics are sinister, sombre….feelings on drowning, death, childhood nightmares etc….so  i guess the whale kinda symbolises that in the book, and that follows through in our music…..

It’s hard for us to say what we have as a whole to influence us….there are a few key bands we all share a passion for – Brand New, Nirvana, Thrice – we definitely love the quiet, REALLY LOUD, formula, but then all of us have individual tastes that we mix in on our own parts, ranging from bands like The Replacements, The Weakerthans, Elton John, Underoath etc… Another major influence for us is comic books, science fiction and cinema, i think we`re all kinda geeky on that front and we always like to throw in sly references to little things that we`re digging at that particular time.

Do you have a decent local following? Oh, and where exactly is local to you lads?

We`re all Glasgow lads! Yeah, we have definitely picked up a good following in the time we have been playing, it’s probably the best thing in the world to see someone you don’t know singing one of your songs back at you at the top of their voice! When we played our E.P launch the first few rows to the back of the room were singing along with us and that was pretty awesome!

You seem to have covered a fair bit in just over a year?

Yeah, i think its important that you get out there and leave your mark, get people speaking about you – the best way to win people over is to play in their own backyard – not literally obviously, although that`d be ace! We`ve had a few messy nights in some places….Lets just say what happened in Wick stays in Wick…. 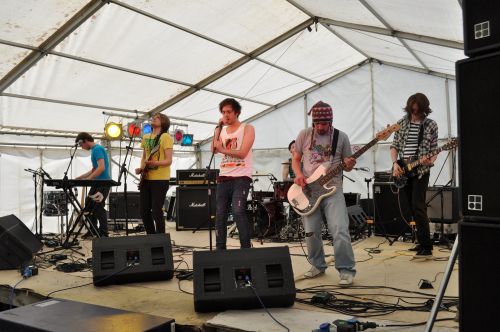 Is it hard to get all six of you together sometimes?

It can be, it’s very rare that we get somewhere on time, and things definitely don’t run smoothly in this band. If there’s a really difficult and long winded way of doing something then we`ll find that way and expand on it…but hey, it’s all good fun!

Dish the dirt. Who’s the criminal in CMI?

Haha, i think we`re all guilty of that, man. Myself, Aiden, Marc and Del definitely like to party hard – Rory and Paddy are teetotallers so we feel obligated to make up for them….but when we`re hungover they take over the baton and cause their own brand of chaos. So aye, Ishmael is guilty of criminal charges!

Any stories of life with CMI that we’d best not print (but of course we will)?

I don’t think it`d do us any favours to reveal the darkness we are hiding, haha!

What’s your favourite gig been so far? Any places you’d love to play?

I reckon our favourite gig so far has been the E.P launch. Knowing that the crowd was there for you and singing songs that you had put effort into gives you a big buzz and the energy in the room becomes electric. Also, playing the Wickerman was amazing, it was our first ever festival, so its something we`ll always remember and gave us a lot of confidence as a unit! I think we`d all love to play T in the Park, that’s probably most Scottish bands dream, outwith that id love to have played CBGB`s. The Barrwolands is another venue i think most Scottish bands dream of playing, and i guess Madison Square Garden just for the banter….

Defo T! But if Glasto was on offer i wouldn’t be saying no….

Any songs in the pipeline that will blow us away?

Yeah, we have a whole bunch of songs that we`re waiting to unleash, we probably have a whole albums worth of acoustic stuff written and another 6 or 7 full band songs we`re gona ease into the set.

I’m pretty rubbish with computers to be honest, haha! I`d say that it’s probably a good thing, music is so widely available on You Tube/MySpace etc. that it has become free, i think bands are now finding that the live shows and merchandise is the way to make money to fund further tours etc. and maybe that’s a good thing because means that bands have to work harder and put on the best live show possible in order to maintain that fanbase…..

Bought a Bride – Brand New (it takes the grunge sound of the early 90`s and makes it modern and fresh, although i could probably take any song from Brand New to be honest)

Bastards of Young – The Replacements (close to perfect song by Paul Westerburg, it was a toss up between this and `Here Comes a Regular`)

Memories of Green – Vangelis, Blade Runner (perfect film, perfect score – even though the composer himself hates it!)

Daniel Johnston – Devil Town (i was listening to it today and it’s just a really haunting, sad and deep song)

Who’s going to win the SPL this season, or don’t you care?

The band is split, 4 of us are Celtic and 2, well 3 if you include our manager are Rangers fans….so lets say Celtic to wind them up!

You get five guests to a dinner party. They may be dead or alive. Who do you choose and why?

David Attenborough – Probably never get bored talking to him, ever!

Aiden (our guitarist) – my mind can’t fathom the absurdity of his chat combined with Karl Pilkington.

Robert Kirkman (comic writer) – probably writes the best comics in the world just now, and he is the go to guy if a zombie outbreak happens!

What music ‘sites do you keep an eye on? (meaning had you actually heard of Flares n Seagulls before now lol).

The music sites we tend to keep an eye on are Glasgow Podcart, Detour, Panic Dots and yourself, just to keep and eye on the local music scene across Scotland. I think all those sites do a really good job on covering all basis, and they do it in a really supportive way which is exactly what local music needs to maintain a high level. I also like Favourite Son`s blog as he`s always right on top of all the good gigs happening in Glasgow, which is a tough task, so kudos to him!

erm….eat your greens, stay classy and come see us play!

Salt and Vinegar…especially when they are badass and burn the inside of your cheek.

…and that’s it, thanks for your time Ry, good luck with the EP and I’ll see you again on Monday!   Still Burning

The debut EP kicks off in fine style with I Am Stop, You Are Go with its insistent chorus burrowing its way deep into your brain from the outset. Coupled with the driving guitar riffs and powerful vocal delivery in their native Glasgow twang, the comparisons with Biffy Clyro are perhaps inevitable. To dismiss these guys as mere copyists however would do them a great disservice though as the subsequent tracks on the EP give a more rounded picture of what Call Me Ishmael are about. That any of the four songs present could be the lead track says something about the real quality on offer here. That they are all completely different in style and execution says even more. From the hard rocking, in yer face assault of Blood And Ashes, the gentle vocals and acoustic finger picking on closer Fire The Tank, through to my personal favourite We Are So Far From Daylight which has the feel of a Muse-type epic about it, the quality of songwriting is exceptional. There’s a deftness of touch, skillful playing and clever arrangements throughout and this EP has something for everyone. Check it out now cos these guys are gonna be going places real soon.   New York Johnny